The Basics of Pruning Trees and Shrubs [fact sheet]

Pruning is often regarded as one of the most intimidating aspects of gardening. Fearful of making a mistake, many people simply avoid it altogether, or indiscriminately cut back plants in a vain attempt to limit their size. Others make pruning cuts only because they think it is something they need to do. When plants are pruned heavily or without a clear purpose in mind, they may end up being worse off than if they were left alone.

Minimize Pruning
There is more to pruning than understanding how to make proper cuts. You also need to know how the plant will respond and what it will look like in the future. This should be dictated by the plant’s natural growth habit, growth rate, height, and spread more than by how you want it to look. Plants should be selected and placed in the landscape based on their mature size and form. Plants that are inappropriate for the site where they’ve been planted are often in need of drastic pruning to maintain their size and will remain a continuous maintenance problem until they are removed or replaced. Plants that are allowed to grow according to their natural forms generally require very little pruning, while others that are sheared or trained into an unusual shape will need frequent attention.

Always purchase high quality plants with a good form that have been trained at the nursery to avoid hassle and headache later on. Pruning and training young trees and shrubs helps to encourage the development of strong branches and an attractive, balanced framework. If done properly at the nursery and during the early years in the landscape, this formative pruning will minimize the amount of time and labor required to care for them later on. It also goes a long way towards ensuring the long-term health and vigor of newly planted trees and shrubs.

Trees and shrubs that have not been trained early on, or have been neglected or improperly pruned for several years, may be in need of more serious renovation pruning in order to redirect growth and restore vigor. 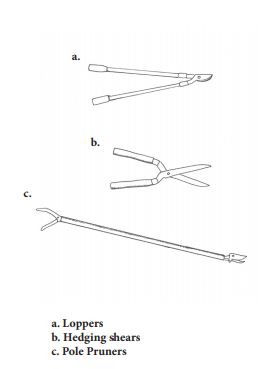 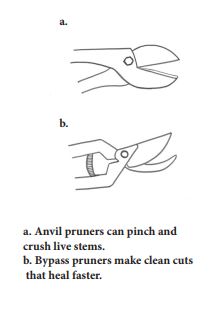 Pruning Tools
Using the proper tools for the job is a key part of pruning. Most experienced pruners will utilize multiple tools depending on the size and placement of the branches they are cutting.

Pruning shears (hand pruners) can be used on branches that are up to a half-inch in diameter and come in two separate styles. Bypass pruners are best used on living branches because, like a pair of scissors, they make clean, close cuts that heal faster. Anvil pruners on the other hand have a single blade which connects against a solid plate. These are not recommended for live wood because they crush stems, although they can be useful for quickly clipping dead branches.

Loppers have long handles and are operated with both hands. They can be used to quickly cut small branches and stems that are up to one inch in diameter. Be aware that trying to make larger cuts with loppers can lead to bark damage.

Hedging shears should only be used for pruning hedges, topiaries, and other formal shapes. There is rarely any need to use hedging shears on deciduous shrubs. Although shearing is faster than hand pruning, selective hand pruning is much better for the plant and results in better structure in the long term.

Pruning saws come in many different styles and can be used for branches that are larger than a half-inch in diameter. The cutting edge of a saw is measured in points (teeth per inch). The most common  general-purpose pruning saws have six-points and can be used for  cutting small limbs. An 8-point saw, such as an apple saw, is most  desirable for delicate, close work, and a 4 ½ point saw is most efficient for pruning large, heavy limbs. Some have fixed handle blades, while others fold-up for easy transport and storage. Hand saws can also have either straight or curved blades. Curved blades that cut on the pull stroke are more efficient for removing large branches, whereas straight blades are best for small, detailed cuts.

Pole saws and pruners are important for reaching some tree limbs or high branches of evergreens. Cutting blades are attached to poles that are either telescoping or jointed together in sections. Fiberglass or  plastic poles are best because they are lightweight.

Chainsaws can also be useful pruning tools for removing large branches or entire plants, but they should only be used by experienced operators.

Tool Care
Just as selecting the right tools is important, so is taking proper care of them. All pruning tools should be kept as sharp as possible in order to make clean cuts. Branches with clean pruning cuts are more likely to heal properly than those that are crushed or ragged from dull tools.

Sanitation
Introducing or spreading disease can be a concern when pruning. While most diseases aren’t spread by pruning tools, a few can be. One of the best ways to guard against infection is by dipping or wiping pruning tools with isopropyl alcohol or a 10% bleach solution (nine parts water, one part bleach) between cuts, especially when moving between related healthy and diseased plants. Furthermore, it is a good idea to prune healthy plants first and diseased plants last.

Basic Pruning Techniques
Pruning is a task that should be addressed with careful thought and planning. How and where you make your pruning cuts will have a big influence on how plants heal and develop new growth. Before you make the first cut, have a clear idea of how that tree or shrub should look in future years. All plants respond to pruning cuts in essentially the same way; as long as you learn the general rules, you’ll be able to predict how your cuts will impact future growth.

Pinching is the removal of just the active growing tips of branches early in the season, stimulating the growth of lower buds on the stem. Pinching temporarily slows growth and promotes increased branching. This  technique is often used on the soft new growth of annuals and herbaceous perennials to encourage more branching and flowers.

Thinning cuts (also called reduction or drop-crotch cuts) reduce the length of a branch back to a living lateral branch. As long as the remaining lateral shoot is large enough, energy is redirected to stimulate stronger growth of the existing shoot rather than resulting in a proliferation of new branches. Thinning cuts are used to increase light penetration, improve structure, and/or decrease height. [Figure 1]

Removal cuts are thinning cuts that remove branches all the way back to the main stem or trunk.

Branch Attachment & Healing
Unlike people, woody plants are unable to heal damaged tissues. Instead, they compartmentalize wounds with layers of cells and by producing defense compounds that help prevent the damage from spreading any further. The angle of pruning cuts impacts how well a tree or shrub will be able to grow over an injury. The proper angle of a cut can be determined by carefully observing two branch features, the branch collar and the branch bark ridge.

With reduction cuts, branches should be pruned just beyond the branch collar to encourage proper  healing. When there is no obvious branch collar, the branch should be removed at roughly the same angle as the branch bark ridge. Preserving the branch collar is critical to ensuring the formation of woundwood and limiting wood decay. Woundwood is able to overgrow small cuts quickly during the active growing season, but large cuts may never develop a layer of woundwood over the entire wound. [Figure 3]

Flush cuts that remove the branch collar or damage the branch bark ridge limit the growth of woundwood, leaving tees with poorly sealed wounds that invite decay organisms into the trunk. Leaving branch stubs is also undesirable, because stubs act as physical obstacles to wound closure. Heading cuts are often unable to develop woundwood and are subject to decay.

How Much to Remove
Although it may seem contradictory, pruning stimulates and directs new growth. Those who try to control the size of a tree or shrub with heavy pruning may actually be making the problem worse, as the plant produces lots of new, vigorous branches. Less pruning can actually equate to slower growth. Old plants that have lost vigor may benefit from severe renovation pruning, but younger, livelier plants may become unruly. A good rule of thumb is to remove no more than one third of a plant each year. Removing more than that amount can cause excessive stress and an undesirable amount of regrowth, ultimately weakening the tree or shrub. 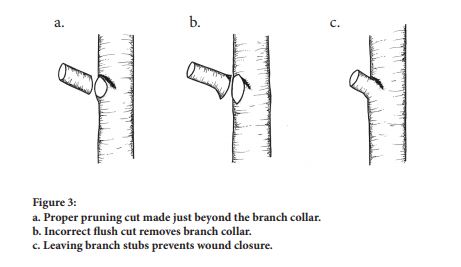 When to Prune
The timing of pruning may also affect how a plant responds. When woody plants are pruned in the dormant season, buds are removed that would have grown in the spring. Reserves that are in the plant are then  redistributed amongst the fewer remaining buds, and the developing shoots are much more vigorous. 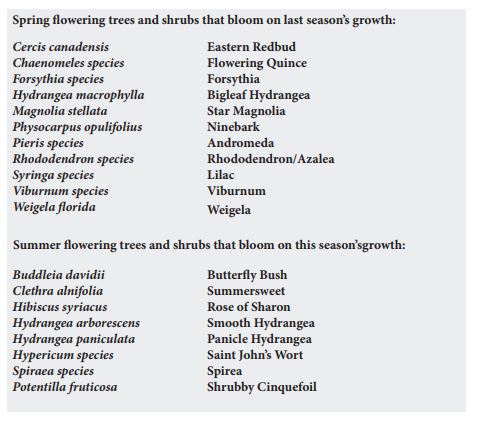 When plants are pruned in the summer after the spring growth flush has ceased they are much less likely to produce new shoots. Thus late summer pruning is the time to reduce growth without stimulating bud growth. Occasionally, late summer pruning may stimulate an additional growth flush in some species that may be susceptible to an early frost or freeze.

The timing of pruning can also affect flowering. Some plants produce flower buds on current season’s growth, while others bloom in the spring from buds formed the previous year. If you want to maximize the flower show, prune spring flowering trees and shrubs shortly after they finish flowering. On the other hand, plants that bloom in the summer should be pruned before growth begins in the spring, because these plants develop their flower buds on the current season’s growth. If  pruning tree fruits or berry crops, be sure to follow production  recommendations for those crops so that you don’t inadvertently reduce your yields.

In addition to regrowth and flowering, you should also be mindful of plant health. Dormant season pruning helps to avoid a number of  physiological and disease issues since new wounds are only open and exposed for a short time before active growth starts. Plants that are pruned in the late summer or fall are more likely to experience dieback at the site of wounds because actively growing cells are more susceptible to damage from cold winter temperatures.

Dead, diseased, or damaged branches can be removed at any time of the year. Carefully removing diseased or torn branches by making clean cuts back to living wood can help limit the spread of decay and protect the health of your tree or shrub for years to come.