About the brown marmorated stink bug...

This invasive insect presents two types of problems: it can be a significant household nuisance, and a serious agricultural pest.

In late August and early September, these stink bugs instinctively search crevices and cracks, looking for a protected location to overwinter. In nature, this includes rock hollows and cliffs. In a populated area, BMSBs may crawl into recessed areas of vehicles, like weather stripping of doors, and inside fuel filler doors. There is some evidence that they prefer white vehicles. They can become a significant nuisance in homes and other buildings, massing on the outside of buildings, looking for a way in. Buildings close to many trees seem to be the most heavily hit. In addition to the searching instinct, they also secrete an odor that attracts other BMSBs. In states where this insect has been living for several years or longer, hundreds of insects can get indoors. From late August to early or mid-September they are also attracted to lights. As this problem becomes more serious, people will have to think about thoroughly screening air conditioners and other routes of entry into buildings. This has to be done before the insects begin searching, which is at the end of August. We know of one New Hampshire neighborhood in Portsmouth that has experienced a taste of the nuisance already.

Eventually, farmers might suffer serious damage to their crops. It is already happening to dozens of fruit, vegetable, ornamental and field crops in the mid-Atlantic states. With luck, our cooler, shorter growing season will slow the insect’s increase, compared to warmer states.

The Household Nuisance in New Hampshire

BMSB is currently a household pest in a few New Hampshire communities, especially in Portsmouth within 3000 feet of the Rt 1 bypass traffic circle.  They mass on the sunny sides of buildings in late September and early October, looking for crevices to get inside.  They overwinter there (usually inside walls) and emerge between late March and mid-May.  As populations build up, we expect to see both an increase in the geographic distribution of massing, and in the numbers of stinkbugs trying to get inside.

Beginning in 2011, UNH Cooperative Extension set BMSB traps on New Hampshire farms and orchards every year. We caught other stinkbugs, but no BMSB’s until 2014, when two were trapped on a farm in Milford. In 2011, hundreds were found in a nursery, on woody plants that had been shipped months earlier from Long Island, New York. Other than those two records, all other New Hampshire records have been specimens in or on buildings.

Agricultural pest:  This is a major agricultural pest in West Virginia and surrounding states, but has not yet built up to pest levels in New Hampshire agricultural crops. The first New England crop damage was reported late in 2014, in some Connecticut orchards. We will keep monitoring the situation.

Biological controls:  While USDA-sanctioned projects are studying the safety of importing and establishing parasites of BMSB from its native home (China), entomologists in New Jersey noticed BMSB specimens in late summer/early fall of 2014 that appear to have been attacked by a native parasite, a tachinid fly.

Adult brown marmorated stinkbugs are brown, about 2/3 inch (16 mm) long and 1/3 inch (9 mm) wide. They have banded antennae (alternating dark and light bands). The rear edges of the body have a white and dark pattern (thus “marmorated”).

Identification tip:  One easy method to tell BMSB from any other look-alike in New Hampshire is to examine the antennae. Starting at the tip and working in, the bands should be dark, light, dark, light, dark.

There are already 36 species of stinkbugs in New Hampshire, several of which are brown. Our native species do not have black & white banded antennae, nor the white & dark marmorations on the rear edge of the body.  Brown stinkbug (Euchistus servus) is common on many plants, but is not commonly found indoors.

People may also confuse stinkbugs with western conifer seed bug, a native species that expanded its range eastward into NH in the late 1990’s. It also has the habit of invading buildings in the fall. Both species can be found in buildings until the warmth of spring (and/or increasing day length?) triggers them to leave. Western conifer seed bug has hind tibiae (leg segments) with an expanded, flat leaf-shape. That’s why the family it is in is called “leaf-footed” bugs. Body length is roughly ¾ inch, a bit longer than brown marmorated stinkbug.

There are several other insects that invade New Hampshire buildings in the fall, including boxelder bug, which is black and red.

One native insect that is similar to BMSB (but rarely found in houses) is the squash bug. Adults are about 15 mm long (almost 2/3 inch), but only 4- 6 mm wide. They are a uniform brown color ---no banded antennae, and no black & white marks along the rear edge of the body. When crushed, squash bugs emit a foul odor. 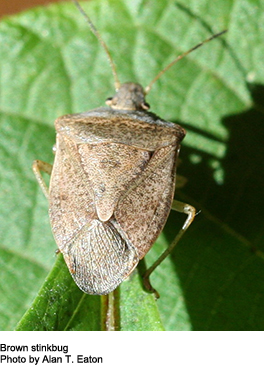 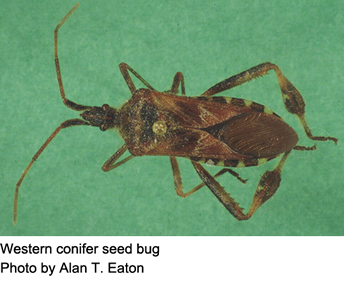 If you find an insect that you would like to have identified, send us a photo, or find details on submiting a specimen to our insect identification service here: https://extension.unh.edu/programs/insect-identification-services