We have two species of borers that attack trunks or branches of peach trees in New Hampshire. The most destructive (and larger of the two) is the peach tree borer, Synanthedon exitosa (Say). Lesser peach tree borer, Synanthedon pictipes (Grote & Robinson) is also here, but it creates less damage. Larvae of a third species, Oriental fruit moth, bore in the tips of twigs, so we will not cover them here. Rarely, we see peach bark beetle boring in peach trees. It is covered at the end.

Peach tree borers overwinter as partially grown larvae, in a gallery under the bark. Usually they are close to or below ground level. Because the egg laying period is so long, overwintering larvae vary greatly in size. As temperatures warm up, they resume boring, and usually complete their feeding in May.

Fully grown larvae are cream colored one inch (25mm) long caterpillars, with brown heads. They move close to the surface and spin their cocoons, which are usually hidden by droppings and/or particles of soil. They pupate inside their cocoons, and the adult moths emerge starting about June 10th. Sometimes the brown skin of the pupa is visible protruding from the exit hole, after the moth emerges. Adults are 15-17mm long (about 5/8 inch), shaped very much like wasps. They may get some protection from bird predation because of their resemblance to stinging insects.

The males have transparent wings with a few black markings. Sometimes there is a hint of light brown on the wing membranes. The bodies of males are black with metallic blue highlights, and a few narrow pale stripes.

Females have black forewings, and the rear wings are clear in the center, with black edges. Their bodies are black, with a wide bright orange band on the abdomen.

The adults are present from June 10th until August 30th, with peak numbers about July 10th to August 15th. When newly emerged, females release a pheromone into the air that males use to find the females and mate. Soon after mating, the females start laying their eggs in cracks and crevices of bark, low on the trunk. 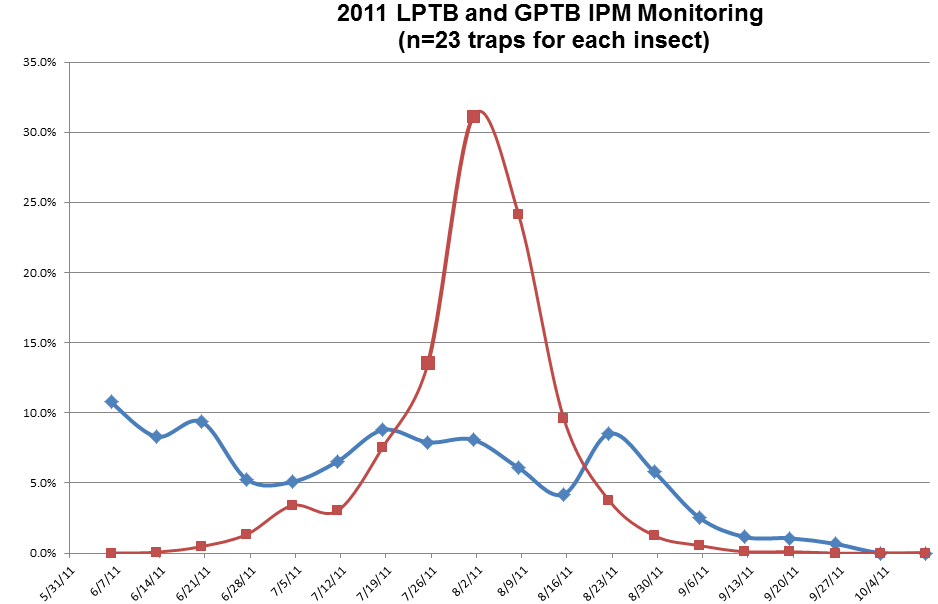 Some are laid in soil very close to the trunk. These insects are strong fliers, and females are strongly attracted to lay eggs in trees that have borer or mechanical damage. The eggs hatch in about ten days, and the caterpillars bore into the bark.

Stone fruit trees respond to injury (of various types) by producing gum at the injury sites. Peach tree borer injury has masses of gum that are mixed with sawdust, low on the trunk. Loss of tree vigor can be a clue to search for injury. Because the insects prefer to attack trees that are already attacked, damage can be severe on some trees, especially if controls have not been applied. Peaches are the most heavily attacked in New Hampshire, but we also see injury on nectarines. Peach tree borer injury is less common here on plums and cherries, but might occur.

Lesser peach tree borers have a life cycle very similar to that of peach tree borer, but the timing and location of attack are slightly different. Lesser peach tree borers attack higher on the trunk and scaffold branches, especially where there are injuries and callus tissue. Black knot galls, found on cherry and plum, are favorite attack sites. The flight period for LPTB is about June 1st through late August.

The adults (both males and females) look like smaller versions of male peach tree borers --- no bright orange color, and about 10-13mm (almost ½ inch) long. Larvae are similar to those of peach tree borer, except for their smaller size. When fully grown (3/4 inch; 20mm) they move towards the bark surface, with their head end exposed. They spin a silk cover to hide themselves, and they pupate. When the adults are ready to emerge from the pupae, they push out slightly, and leave the brown pupal skins slightly protruding from the bark. A careful observer can spot some of the protruding skins for a while after the moths emerge.

Isomate pheromone dispensers can be used to control peach tree and lesser peach tree borers. They are relatively new to NH growers. They are not monitoring devices. They are designed to control the borer population by dispersing so much female odor in the orchard that few males can find the real females, and few females mate. That means the unmated females lay sterile eggs, which don’t hatch. The method has advantages. By not spraying/handling toxic pesticides for borers, growers eliminate some risk of toxicity exposure to themselves and their workers. They also reduce the risk to beneficial organisms (pollinators, insect predators and parasites), the chance of the pests developing resistance, and spray drift. Isomate PTBDual controls both the peach tree borer and the lesser peach tree borer.

Larger blocks are better sites to use this control method compared to small (especially long, narrow) ones. Set out the dispensers before May 15th. If you are not worried about lesser peach tree borer you could set them out a week later. They work for the entire season, releasing the pheromone continuously over the flight period. Hang 150 dispensers per acre, in a uniform pattern across the block, at about head height in the trees, somewhat towards the tree center. Wrap each one once around a branch, with a single twist to keep it in place. If you have a spot with heavy borer pressure, or if this is the first year you’ve used the dispensers for control, use 250/acre. Some experts suggest that you supplement the dispensers with one insecticide spray the first year in a block with high pressure. Pheremone confusion is NOT an option for backyard growers… too small an area.

This might be a control option for organic growers, since they cannot use synthetic insecticides. It is not practical for someone with many trees, but can work for a few trees if the manager is careful and acts at the correct time. For peach tree borer, search the lower 18 inches of trunk, especially the portion right at ground level. It is most effective if the top two inches of soil is temporarily removed from around the trunk so you can see slightly below ground level. Search for any gummosis, especially if it is mixed with particles of wood. Fall may be a best time to try this than spring since the injury is less extensive then. It makes no sense to try in summer because the borers are too tiny at that time. Remove any gum that you find (especially any mixed with sawdust), and repeatedly probe the tunnels from which it exudes. Use a small diameter flexible wire to impale the borers. Then fill back the soil. For most sites, this is not very practical. You have to do it every year.

When applying insecticides for borers, we try to cover the vulnerable parts of the tree. For PTB, that’s the lower 18 to 24 inches of the trunk. For LPTB, that’s the scaffold limbs. Ideally, we protect it for the entire period when the females could be laying eggs. That is why organic sprays are not very effective on the borers. They break down too quickly. Probably the most effective of the synthetic chemicals is Lorsban, which seems to have a high affinity for bark, and has worked very well (a single application) for years. Insecticide choices keep changing, but so far, the other alternatives require multiple treatments to be effective. When applying some insecticides, it is critical to avoid hitting the fruit. The current New England Tree Fruit Management Guide lists options. For backyard growers, insecticide choices have been so restricted and diluted that prevention is the key management tool.

In theory, we should be able to kill the larvae of borers with insect-attacking nematodes. The nematodes survive well in relatively moist environments, and actively penetrate substrates (like borer tunnels) to find and kill their prey. But currently there are no nematode products available that have been tested to determine the species of nematode to use, the rate, or timing to control peach tree borers. Trying the methods on your own would be a very expensive experiment.

Theoretically, a fine mesh barrier of screening covering the lower 1.5 to 2 feet of trunk, securely fastened at the top to the tree, buried into the soil, with no gaps to admit the adults, and held out from the trunk at least an inch, should prevent peach tree borer attack on new, uninfested trees. It would have to be in place from May 30th through late August. This would be tricky to accomplish without causing injury to the trunk, or restricting growth.

Solid, wrap-around tree guards might actually encourage some of the borers, and might cause other problems. We do not recommend them!

Avoid injury to the trunks, especially the lower two feet. This could be from mowers, tractors, string trimmers or other equipment. If heavily attacked trees are on your property, control the borers or remove those trees (at ground level if possible), to avoid building up a high population of the pests. These points are very important, which is why we listed them first.

Often growers apply white latex paint (diluted with water) to lower trunks of apple and peach trees to prevent bark splitting (“southwest injury”) during the winter. This may help reduce borer attack as well. Two mechanisms are possible: it could help by reducing bark splitting, and/or by changing the texture/odor of the bark surface, thereby reducing egg laying.

Peach bark beetle Phloeotribus liminaris (Harris) is a tiny (2mm long) brown beetle in the Scolytid family. It attacks peach and cherry trees, sometimes plum trees. We see this insect sporadically in New Hampshire. The adults bore into the bark and cambium, leaving round holes that fill with gum and frass particles plus fine silk threads. The beetles bore parallel to the ground (across the grain) and the tunnels significantly disrupt nutrient flow. The holes are roughly 1mm in diameter (1/25th inch). A close relative (and more common here) is shothole borer, Scolytus rugulosus (Muller), a black 2.5mm beetle that attacks a wide range of hardwood trees. Their egg-laying tunnels run parallel with the wood grain, and are about 1mm in diameter. The larvae of both species are tiny whitish grubs that feed in the bark galleries. Damage is often worst in trees close to piles of firewood from peach, plum or cherry (or, for shothole borer, close to any deciduous firewood). According to the 1916 farmers’ bulletin 763, attacks from both these species can be reduced by trunk application of whitewash (similar to our current white paint treatment).

All photos are by Alan Eaton, except the photo of a peach tree borer larva, from Clemson University, and the photo of the Isomate PTB Dual dispenser, by Mary Concklin, Univ. of CT. Drawings are by H.F.Wilson, from USDA Farmers’ Bulletin 763 Orchard Barkbeetles and Pinhole Borers, and How to Control Them by Fred Brooks, November 1916. Partial support for this work came from IPM grants from the New Hampshire Department of Agriculture, Markets and Food, and the National Institute for Food and Agriculture. Thank you to Mary Concklin, Univ. CT Cooperative Extension, for reviewing the manuscript and making helpful suggestions. Thank you to Suzanne Hebert for layout and posting to the web.

Download the Resource for the complete fact sheet and a printable version.