In late spring and early summer, there are several species of adult beetles in the home landscapes of New Hampshire, attacking prized ornamental trees, shrubs, flowers, and foliage plants. Among the most commons are the Japanese beetle (Popillia japonica), the rose chafer (Macrodactylus subspinosus), and the Asiatic garden beetle (Maladera castanea). Learning to identify these insect pests and knowing their life cycle is key to prevention and control. These three species spend their first year beneath the soil as white grubs. These grubs hatch from eggs laid in late spring or early summer, in soil with turf grasses or weeds. The grubs feed on grass roots, often causing damage to lawns and other plants. This fact sheet deals only with the adult beetles that emerge the following summer to feed above ground and breed the next generation. In New Hampshire, all three pests produce only one generation each year. The adult rose chafer feeds and mates over a three-week season, while the Japanese beetle and the Asiatic garden beetle feed throughout the growing season. 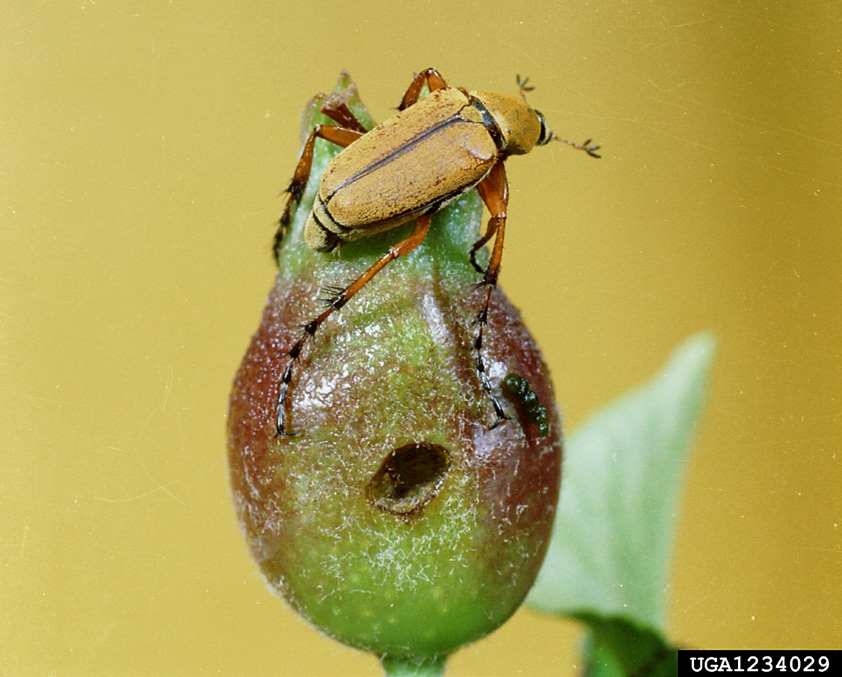 A common pest of fruit and ornamental plants, the rose chafer is especially destructive in areas with sandy soils preferred by the larvae. This ¾” long beetle is spindly-legged, long, and slender. It is tan to gray with a reddish-brown head and thorax and a black under-surface. These chafers damage plants by eating foliage, buds, and ripening fruit. Rose and peony blossoms are especially susceptible, as well as the foliage of mountain ash and elms. Rose chafers also damage apple, cherry, and crabapple trees, grape, strawberry, raspberry, hydrangea, hollyhock, and many other ornamental plants. A word of warning to folks who keep free-range poultry: rose chafers can poison and kill poultry and other birds. Rose chafer adults often appear suddenly in great numbers about midto late June. Like Japanese beetles, rose chafers are active during the day. They feed for about three weeks. Home gardeners can handpick rose chafers from small shrubs and flowers or shake the beetles into a can or onto a ground cloth. They must do this morning and early evening every day to achieve effective control of this pest. Some gardeners use a variety of “lure” plants, such as Spireas, Deutzias, Andromeda, blackberries, and white roses to attract the early-arriving chafers for handpicking, helping reduce damage to the most desirable later-blooming specimens. They might also try covering plants with cheesecloth or spun-bonded polyester row covers (available at most garden centers) when chafers are active. 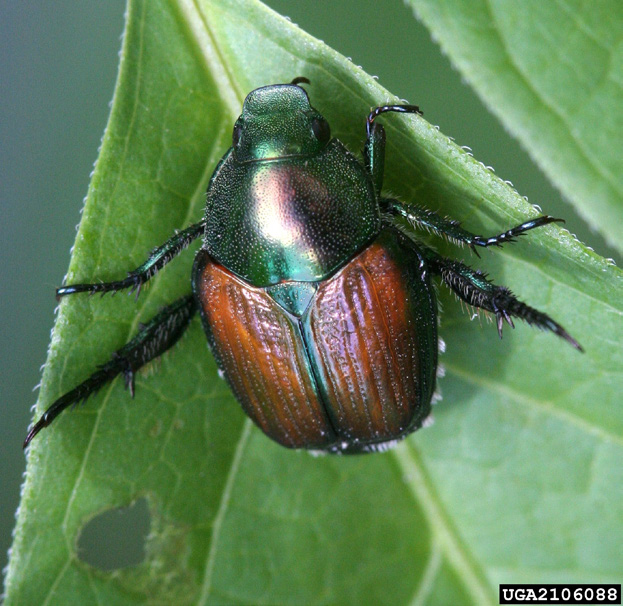 Japanese Beetles are about ½” long, metallic green with bronze wing covers and a row of white tufts of hair on each side of the body. These beautiful metallic beetles feed on more than 400 species of broadleaved plants, including roses, Rose-of-Sharon, hollyhocks, apples, cherries, pears, peaches, grapes, hollyhocks, Japanese maple, Norway maple, horsechestnut, black walnut, ash, and gray birch. The adults eat the tissue between leaf veins, leaving attacked leaves with a lacelike appearance. They also attack the flower buds and fruits of favorite plants, as well as overripe and decaying fruits. Adult beetles emerge from the soil between the last week of June and early July and are most active from mid-July through August, though they may be present until the first frosts of early fall. After adults emerge from the soil, they crawl onto low-growing plants to raise their body temperature before taking flight. Then, they seek out suitable food plants, leaving a pheromone (scent) trail to alert others to good food sources. As with rose chafers, Japanese beetles may suddenly converge onto landscape plantings in such huge numbers that chemical control is difficult and often impossible. Newly emerged female beetles release an additional sex pheromone which attracts males. After breeding and feeding for a day or two, the females leave feeding sites and burrow into the soil to lay eggs. These females leave the soil within a day or two and return to their food sources to feed and mate again. This cycle of feeding, mating, and egglaying continues until a female Japanese Beetle has laid 40 to 60 eggs. As with chafers, home gardeners can handpick or shake Japanese beetles from small plants mornings and early evenings. If you live in an area with high Japanese beetle populations, consider selecting landscape plants rarely attacked by this pest, such as lilacs, holly, boxwood, euonymus, red and silver maple, flowering dogwood, cedar, spruce, juniper, arborvitae, red oak, magnolia, forsythia, hydrangea, or taxus (yew). We do not recommend the pheromone traps guaranteed to lure huge numbers of Japanese beetles to their deaths. While traps attract lots of beetles, some research indicates using the traps may actually increase beetle damage to neighboring plants. Do not use the traps for controlling Japanese beetle grubs in your lawn, either; there is no evidence these traps reduce grub populations in surrounding lawns. 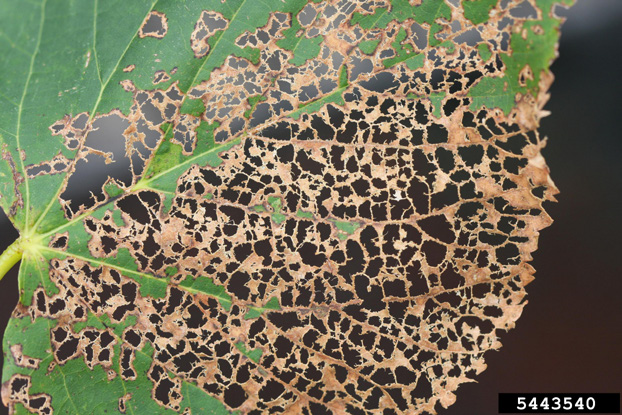 The Asiatic garden beetle is small and velvety, cinnamon-brown, about ½” long, and roughly the size and shape of a coffee bean. It attacks many different vegetable, herb, fruit, and ornamental plants, including butterfly bush, rose, dahlia, annual aster, chrysanthemum, cosmos, delphinium, perennial aster, petunia, phlox, and zinnia. The beetles emerge from their pupae late June to early July. Unlike Japanese beetles and rose chafers, Asiatic garden beetles feed mostly at night, chewing irregular holes in the blossoms and foliage of host plants. Gardeners who notice damage to vegetable, fruit, or ornamental foliage, particularly around the leaf edges but have not seen the destructive pest itself can monitor for its presence by visiting the garden at night and shining a bright light down around affected plants; the beetles are attracted to light. They may congregate in great numbers on the windows or screen doors of lighted homes in the evening. One technique home gardeners can use to help control Asiatic garden beetle is to reduce overwintering habitat by tilling under or composting weeds and plant debris each fall.

• Trapping - Japanese beetle traps are useless as a control. All they do is attract more beetles. DO NOT USE THEM.

There are a number of registered pesticides on the market to control one or more of these beetles. Because labels will vary with manufacturer, always check the pesticide label and be sure that the product is labeled for beetles on outdoor ornamental plants. Many gardeners have found dusting or spraying for these pests is futile. Because Asiatic garden beetles feed at night and bury into surrounding soil during the day, they are difficult to find and kill, especially in years when populations are abundant. Rose chafers and Japanese beetles are strong flyers that can migrate for miles in search of choice edibles. So even though the spray you applied Sunday to protect your roses has killed the beetles you found feeding there, by Wednesday you may find a whole new congregation of beetles chomping away on the same plants. Do not apply any pesticide more often than the label specifies. Gardeners who choose to protect plants with pesticide sprays or dusts should know the most effective products are also highly toxic to honeybees. Do not apply pesticides during the daytime hours when bees are visiting flowers.

Download the Resource for the full printable fact sheet.