We have three species of rootworms on New Hampshire corn. Their effects can sometimes be serious enough to require action. In states farther west or south, that might routinely include an insecticide treatment. In New Hampshire, the need for insecticide treatment is rare. Field corn is more commonly affected than sweet corn, since field corn is not often rotated, nor treated with insecticide, as opposed to sweet corn plantings that are more commonly rotated and treated with insecticides for pests such as earworms and European corn borers. Field corn that is chopped for silage is more seriously affected by rootworms than field corn grown for grain, which is common further south.

All three species have similar life histories with a single generation per year. Females lay eggs in the soil in late summer, near the bases of corn plants. They prefer to lay their eggs in cracks and crevices in the soil. The eggs overwinter in the soil and hatch in early summer. Most just-hatched larvae die if no corn roots are near them. However, if a field is again planted to corn, then many of the larvae survive, chew on fine roots, and bore inside larger roots. By late July or August, the larvae have reached full size and pupate in the soil. The adult beetles emerge in August, feed on the silks and leaves, and mate. Soon after mating, the females lay eggs in the soil.

Northern Corn Rootworm (Diabrotica barberi) is the most common of our three species. It was first collected in New Hampshire in 1968, and now lives throughout the state. It is usually tan or green in color, lighter when first emerged. Like the other species, adults are about 1/4" long. In late summer it is frequently found on the silks or in the ear zone.

Southern Corn Rootworm (Diabrotica undecimpunctata) is the least common rootworm in New Hampshire. Also called the spotted cucumber beetle, it is yellow-green with 11 or 12 large black spots. It is so uncommon that it is not of much concern. Out of the 260 rootworm sticky traps we set across the state in summer of 2000, we caught only one southern corn rootworm!

Western Corn Rootworm (Diabrotica virgifera) is the most destructive of the three species, by far. It is also the most recent one to invade New Hampshire. We discovered our first specimens in 1991. Males of this species are yellow with three lengthwise black stripes. Females show more black than the males, and the stripes are often merged together. In addition to the larval root chewing, adults of this species feed extensively on silks and foliage.

Plants that have severe root injury will often partially fall over (lodge), creating a goose necked form. Attacked plants can be stunted and have much lower yield. (Also, at harvest time the cutter misses that portion of the lodged stalk that is laying on the ground.) Sometimes the fresh silks can be severely chewed, and this can affect pollination. In the corn belt, western corn rootworms are sometimes in high enough numbers that the leaves can appear ragged from chewing.

Rootworms are least abundant in the far north and the mountains, where northern corn rootworm is usually the only species found. The highest rootworm populations seem to be where lots of corn is grown, and not rotated. In our 2000 survey, we found high populations in particular fields in Hollis and Haverhill. The previous year, hot spots were in Hollis, Antrim, Plainfield, Lebanon, and Hudson, and so, local conditions affect buildup. Research in New York showed that soil type plays a role in rootworm numbers. Soils that are poorly drained tend to have lower rootworm numbers, compared to well-drained sites. This may be due to poorer survival of the larvae or pupae under wet conditions. The effect disappears in dry years.

Western corn rootworm is most likely to be encountered in Grafton, Hillsborough, Cheshire, or Sullivan counties. It has not yet been confirmed in Carroll County, but this is probably because we have not searched intensively there.

Southern corn rootworm has so far been reported (in very low numbers) in Strafford, Rockingham, Grafton, and Hillsborough counties. It probably occurs across New Hampshire, south of the White Mountains.

The standard method for monitoring rootworms involve counting the beetles in a field in late summer to predict potential problems next year, in the same field. The following method was devised by Integrated Pest Management (IPM) workers in New York. This technique (called a sequential sampling method) minimizes the amount of effort you need, while maximizing reliability of the information. Table 1 is set for an action threshold of 2.5 rootworms per plant. Fields with sandy soils may be able to tolerate higher numbers than this. More detail is in the fact sheet by Shields et al., listed in the acknowledgments. It is unlikely that monitoring will be needed if you grow corn that is genetically modified to resist rootworm attack.

Two weeks after pollination, cross the field, stopping at several places to count the number of rootworm adults that you find per plant. Pay particular attention to the silks and ear zone. The beetles often are partly hidden in the silk, or hide in cracks between the ear and stalk, or leaf and ear. In hot weather, some beetles may fly away as you approach each plant; try to include those in your count. You can keep track of the plants you count and the score (“running total”) on a small pad of paper.

The first time or two that you use the method, you may prefer to write down 4 columns, as in Table 2: Plant Number, Number of Northern Rootworms, Number of Western Rootworms, and Running Total. Running total is not a simple sum of the number of rootworms you find. You count each northern corn rootworm as one half, and each western corn rootworm as one. For each new stalk, you add the score for that plant to the running total for the previous plant, so “Running Total” is a cumulative value. You keep moving to new stalks and count, until the running total either 1) falls below the “too low” value or 2) exceeds the “threshold reached” figure. That is when you stop. If you get all the way through the table (to plant #55) and the running total still has not reached either the “too low” or “threshold reached” level, then this is a borderline case, where it might be worthwhile to treat, or it might not. In such a situation, sampling again a week later may help. This sampling method is designed to require very few samples in fields with very high or very low rootworm populations, so the actual number of stalks you count depends on the number of rootworms you find.

For the last several years, we have been monitoring rootworm numbers with the use of Trece brand unbaited yellow sticky traps. This program is designed to give us information on rootworm levels over a wide area, because the method described above is impractical to simultaneously check rootworm numbers in dozens of fields in 6 counties! The sticky traps are placed around corn stalks in the ear zone, when silks have appeared. Ten to 14 days later the traps are examined, and the beetles are counted. This method can give us a very rough idea of the rootworm population, and we are tentatively using 100 beetles per trap as the threshold to consider some form of treatment for the next year.

In August 2000, we placed traps (most fields had two) in 129 fields in Coos, Grafton, Sullivan, Cheshire, Merrimack, and Hillsborough counties. The overall average catch was 10.5 rootworms per trap (8.6 Northern, 1.9 Westerns). Only 3 fields reached our rough threshold of 100 rootworms per trap. Compare these results with those from four years of trapping in Ohio, a state with significant rootworm populations: using the same yellow sticky traps, hung in the same way, an average of 114 rootworms were captured per trap in first year corn, and 289 per trap in non-rotated corn. This underlines the inappropriateness of automatically treating our fields with rootworm insecticides, or relying on pesticide advertising that is targeted for the corn belt. 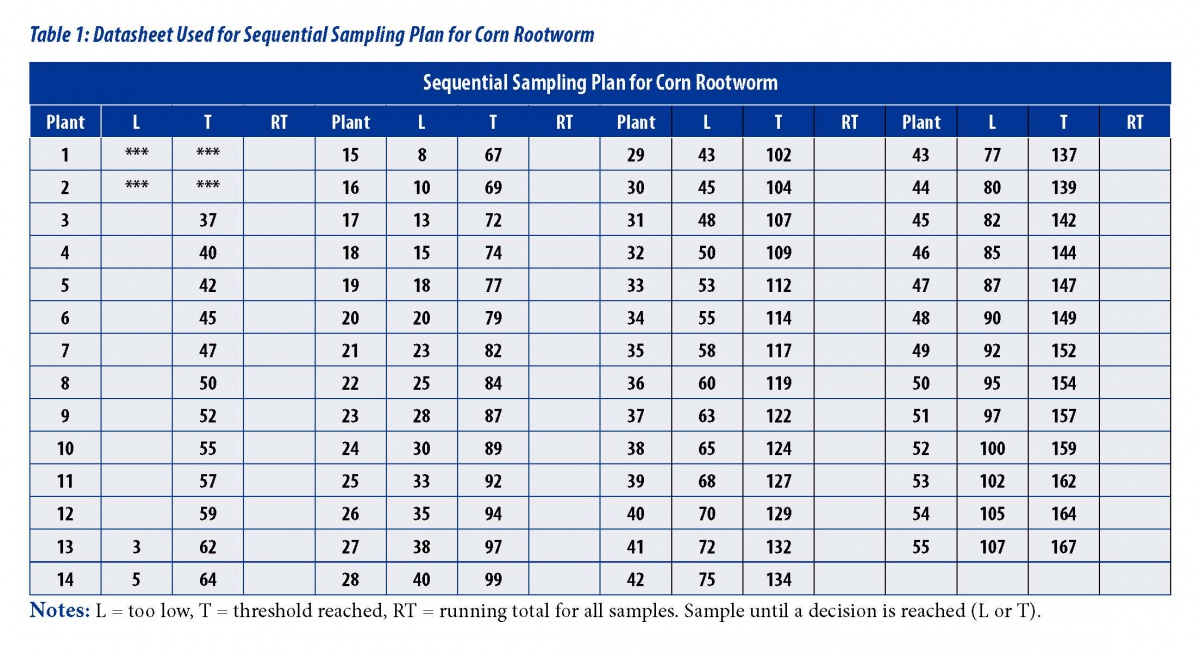 • Cultural Practices -The simplest and least expensive control method is to rotate fields. Corn that is grown in soil that grew some other crop last year is unlikely to suffer any root injury from rootworms. The major disadvantage of rotation is the lack of rotational crops that can produce a similar yield of energy for livestock. You may wish to delay planting fields that you plan to rotate next year. Later planted fields often attract rootworm adults from adjacent plantings (they like the younger plants and fresh silk). They will lay plenty of eggs in this later planted field, but since it is going to be rotated to another crop next year, the eggs will die.

• Biological Control - You can purchase insect-attacking nematodes to control rootworm larvae, but this approach is currently far too expensive.

• Genetic Control - Many acres of field corn grown in New Hampshire in 2016 have been genetically modified to resist injury from rootworms. If you are growing these varieties, there is no need to apply a rootworm insecticide, and probably limited need to monitor for rootworms.

• Chemical Control - For situations where rotation is impractical, the corn variety is not genetically modified to resist rootworm attack, and rootworm populations are high enough, insecticide treatment may be useful. In the corn belt, rootworm damage is a much greater risk than here in New Hampshire, and insecticides are more often used. Generally, insecticides are applied to the soil (usually in granular form) to kill the young larvae. Some labels instruct to do this at planting time; others say after planting.

Insecticides should only be applied if you are certain that populations are high enough to pose a risk. (See comments on thresholds above.) Soil insecticide use carries a risk of acute toxicity to the applicator and possibly other farm workers and livestock. Application to soil may also carry a significant risk of contaminating groundwater, and a risk to surface waters if heavy rainfall comes right after treatment.

Soil insecticides are also highly destructive to insect predators that live on or in the soil, such as ground beetles and predator mites. Granular forms of several insecticides are so dangerous to small birds, that their registrations have been canceled or severely limited in the U.S. (The birds apparently mistake granules for seeds, and die after eating only a few.) Repeated use of the same pesticide may cause rootworms to become resistant. Lastly, consider the cost, which could be $30 or more per acre. Adding up the various risks and costs, applying insecticide to a field where it is not needed can be a serious mistake.

For the 2001 version of this fact sheet, Keith Waldron provided suggestions and assistance. The sequential sampling chart is from Cornell Cooperative Extension Field Crops Insect fact sheet 501 by Elson Shields, Roger Sher, Paul Taylor and Phillip Sutton. George Hamilton reviewed the manuscript and provided considerable assistance with rootworm surveys. Tom Buob also did much work on the surveys, and was joined by Steve Turaj, David Seavey, and Bruce Clement. Part of the funding for the rootworm survey came from an IPM grant from the New Hampshire Department of Agriculture, Markets & Food. Carl Majewski made valuable suggestions for the 2016 re-formatted version.

Download the Resource for the complete fact sheet and a printable version.