Nicotinic acid is a B-vitamin that is normally not needed in the diet of cattle because the bacteria that reside in the rumen can make it. Nicotinic acid, more commonly known as niacin, has been shown to reduce ketosis and increase milk protein percent in some experiments but not others. It has been shown to increase a protozoan species (Entodinia) in the rumen that engulfs starch, potentially helping to protect the cow from acidosis. If the rumen pH is normalized due to the presence of more entodinia then more bacteria would be able to grow there. Rumen bacteria are the best source of protein to the cow. Another function of nicotinic acid in mammals is that it increases blood flow and potentially helps alleviate heat stress during the summer.

Our hypothesis was that feeding niacin would cause more bacterial protein to be produced in the rumen. This would result in more microbial protein flow to the abomasum, promoting a greater amount of amino acids (the main constituent of protein) to be absorbed within the small intestine.

Considering this, and the increased blood flow going to the mammary gland during colostrum production (the first four weeks before calving), the addition of niacin should improve colostrum quality.

To determine if the niacin increased bacterial counts, urine samples were taken from the cows three times per week and analyzed for purine derivatives which are positively correlated with rumen microbial protein production (bacteria). Colostrum quality in the US still needs improvement, data from a national survey indicates that about 60% of the colostrum produced across the country fails to meet minimum standards (Morrill et al., 2012). Data indicates that calves fed better quality colostrum are not only healthier during the first few weeks of life, they also produce more milk when they begin to lactate. There are other growth promoters and nutritional factors in colostrum that have far-reaching effects (Faber et al., 2015).

This experiment was conducted at the University of New Hampshire Fairchild Dairy. Thirty-six Holstein cows were used in the experiment, beginning four weeks before scheduled calving. There were four treatments with nine cows per treatment. Treatments were 0, 16, 32, or 48 g of nicotinic acid per cow per day. Cows entered the experiment when they were four weeks before the predicted calving date. First-calf cows were not used in this experiment. Feed intake and the bodyweight of the cows were monitored. To determine if the niacin increased bacterial counts, urine samples were taken from the cows three times per week and analyzed for purine derivatives which are positively correlated with rumen microbial protein production.

At calving, colostrum was harvested and the calves received one gallon of colostrum. Colostrum quality and yield were then measured. Twenty-four hours after birth, a blood sample was taken to determine the uptake of the immunoglobulin- IgG. This is the primary antibody of importance for ruminants.  Beginning on day 2 calves received free choice calf starter, free-choice water, and they were fed four quarts of a conventional milk replacer. Daily feed and water intakes were tracked. Growth measurements were taken at birth and then weekly for six weeks.

A review of interpreting statistics is presented at the end of this review. The results of the study are in Table 1.

Cows fed the various amounts of nicotinic acid reacted similarly across treatments. Cows fed increasing amounts of nicotinic acid produced more purine derivatives daily, indicating a greater rumen microbial protein production. This protein would be digested post-ruminally resulting in more amino acids for absorption and production of IgG and other proteins (data not shown). Results indicated that cows produced similar amounts of colostrum. While there are numerical differences, there was sufficient variation in the data and no statistical differences were observed.  However, as niacin supplementation increased colostrum quality increased (linear effect). But it must be considered that the 48 g/d treatment numerically produced the least amount of colostrum and that the increase in concentration is due to the reduced amount of colostrum produced. This fact comes into focus when we look at IgG yield which peaked (quadratic effect) at the 32 g/d treatment. This value takes into account the concentration of IgG and the yield of colostrum. Protein content increased as niacin supplementation increased (linear effect). However, the protein yield peaked at the 32 g/d treatment (quadratic effect). Fat content and yield increased quadratically both peaking at the 32 g/d treatment. Therefore, for better quality colostrum 32 g/d supplementation of nicotinic acid is recommended.

From a calf perspective, all calves received a 20/20 milk replacer at 1 pound of powder/day. All calves had free choice water and calf starter both removed and replaced daily. While calves consumed similar amounts of calf starter per day, their average daily gain resulted in a trend for a quadratic effect with the greatest response in calves born of cows fed 32g/d nicotinic acid. This response carried over into feed efficiency. This is a measure of how much growth the calf puts on their body per unit of feed consumed. Calves born of dams fed the 32 g/d treatment resulted in a better feed efficiency response than calves born of dams fed the other treatments. Upon further investigation, most of this response occurred in the first 3 weeks of life when the calves are getting most of their nutrients from milk and their rumen has yet to develop (data not shown). Therefore, it appears that there is some component in colostrum that was enhanced by feeding the 32g/d treatment to their mothers resulting in greater intestinal development. The small intestine is where most nutrients are absorbed at this time in the calf’s life. 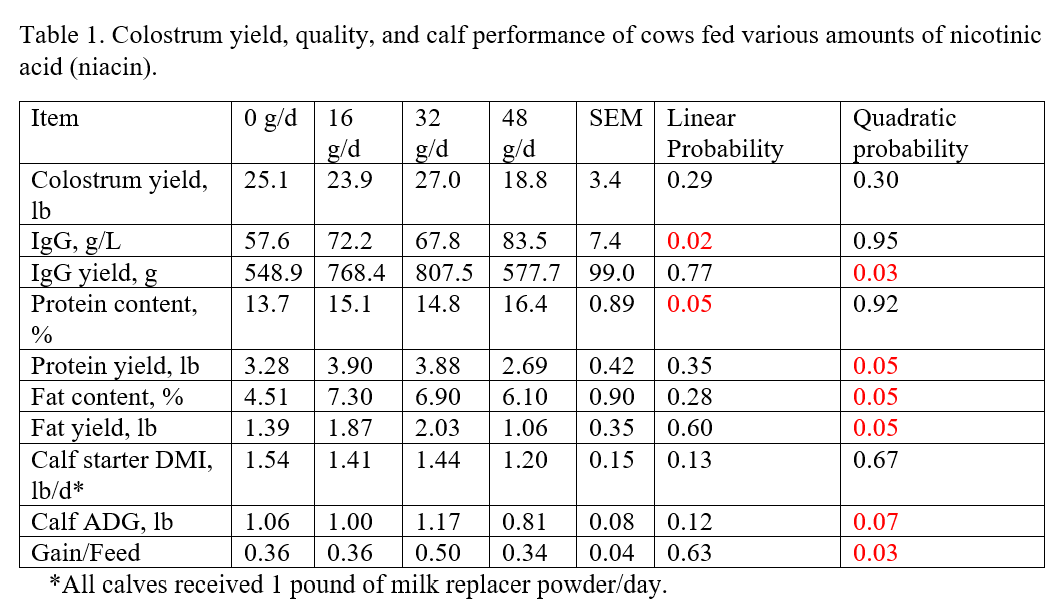 These data appear in the publication:

To know whether to recommend or not recommend something, we need to have an understanding of statistics. We design studies to evaluate a hypothesis. Statistical purists refer to this as a null hypothesis. In this study, the null hypothesis would be that supplemental nicotinic acid would NOT affect calf or cow performance. We run statistics to reject or accept the null hypothesis. This is where probability steps in (often referred to as “P-value”). Any P value ≤ 0.05 means that we reject the null hypothesis and we can be 95% or more sure that the response is not due to chance (≤ 5% it would be due to chance).  This is referred to as being statistically significant. A trend or a “tendency” occurs when the P-value is 0.05 ≥ 010. This means that the chance of this happening is between 90% and 95%. Any P-value > 0.10 is deemed nonsignificant. As you can see, statistics are conservative.

In this study, we took it to another level, our study allows us to pinpoint a recommendation that farmers can use. This utilizes linear and quadratic effects. Linear probability means that as the nicotinic acid increased the response measured increased or decreased in a “straight line”. For instance, IgG concentration increased for the most part as nicotinic acid increased. The challenge of getting only a linear response is that the data do not tell you what the best treatment is only that the specific response it increased or decreased.

More importantly, are quadratic responses, these types of responses actually point to the recommendation. The curve begins to look like a “bell or U shape”. In this study, the responses look more “bell-shaped”. This allows us to make a recommendation to feed a specific amount of nicotinic acid. Therefore, we can safely, recommend that 32 g/d nicotinic acid will result in the best responses (see: IgG yield, protein yield, fat content, calf ADG, and calf gain/feed).  Of interest, this is how nutrient requirements, fertilizer application rates, and drug requirements are determined by agricultural researchers and make recommendations to you based on these results.