Peatlands are wetland ecosystems that contain peat, a spongy, organic material formed by partially decayed wetland plants. Typically found in cool climates, peatlands are associated with acidic or stagnant water this is low in oxygen. The water in many peatlands is highly acidic and lacking in nutrients, creating growing conditions for a very distinct group of plants.

The most common type of peat is “Sphagnum peat,” made up of layers of Sphagnum moss. Sphagnum plants float, and as they grow along the edges of ponds or slow moving streams, they expand onto the surface of the water (see photo at right of at Pondicherry National Wildlife Refuge in Whitefield, NH). As older plants die, new plants grow on top, thickening and strengthening the peat mat, which may eventually cover the entire pond. Visitors to these peatlands may experience the peat mat trembling underfoot as it floats, giving rise to the term “quaking bog.” The peat mat also provides a surface on which other vegetation can grow.

Peatlands can be categorized into three groups:

The NH Natural Heritage Bureau finds, tracks, and helps conserve New Hampshire’s rare plants and exemplary natural communities, many of which are peatlands. Their photo gallery contains many different varieties of peatlands (or "natural community types") in New Hampshire.

Why are Peatlands Important? 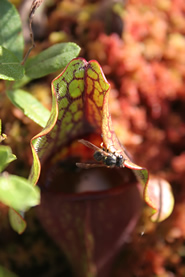 Peatlands add significantly to New Hampshire’s biodiversity.
At least 550 different plants grow in peatlands in the state, many of them highly-specialized to their environment. Peatlands also provide habitat for a unique collection of animals, including the ringed boghaunter, a rare dragonfly that breeds in open peatlands in southern New Hampshire. In the north, peat bogs are a favored habitat of bog lemmings and spruce grouse.

Rare and unique species
Peatlands may be most notable for the distinctive plants they support, such as the carnivorous pitcher plant and sundew, or for the variety of colorful orchids that grow there. The New Hampshire Natural Heritage Bureau tracks fifty-four rare plant species that occur in some type of peatland habitat. Many insects found in peatlands depend on a single peatland plant species for food or to complete their life cycle. For example, in the northeast there are four different insects and one mite that depend on pitcher plants for their survival.

Like other wetlands, peatlands are threatened by development (by filling and draining), especially in fast-growing parts of the state. Peatlands are particularly sensitive habitats and are vulnerable to changes in the uplands that surround them. Runoff from agricultural fields, lawns, and commercial irrigation can have significant effects on peatland vegetation. Lime and fertilizer runoff can increase nutrients and can raise the pH (i.e., reduce the acidity) of peatland waters. These changes can increase the rate of decay of peatland soils, potentially destroying the peat mat. Timber harvesting can also significantly alter forested peatlands. If harvesting occurs when soils are not completely frozen and the ground is not snow-covered, equipment can damage or destroy fragile peat soils. Additionally, if a peat swamp undergoes a particularly intensive harvest such as a clearcut, the loss of trees can alter the hydrology of the peatland. This can result in a higher water table, preventing trees from regenerating on the wetter soils and potentially altering the vegetation structure for decades.

Where are Peatlands in New Hampshire? 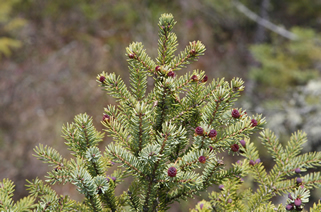 Peatlands, though rare on the landscape, are scattered across the state. In central and southern New Hampshire, peatlands are often associated with interesting geological features called “kettleholes.” These circular depressions were created by large ice blocks left behind by retreating glaciers and support wetlands called “kettlehole bogs.”

Click here for the Peatlands Climate Assessment, a section of the Ecosystems and Wildlife Climate Change Adaptation Plan (2013), an Amendment to the NH Wildlife Action Plan

Many wildlife species use peatlands for part of their life cycle, whether for breeding, feeding, cover or nesting. Below are some examples of species that depend on peatland habitats. Be on the lookout for these species and other wildlife associated with peatlands. Follow stewardship guidelines to help maintain or enhance peatlands. Species of conservation concern--those wildlife species identified in the NH Wildlife Action Plan as having the greatest need of conservation--appear in bold typeface and are linked to their wildlife profile from the Plan.

The contents of this webpage are also available in the following formats: