In appearance, scales in general show little resemblance to typical insects. They are well protected by the waxy, almost impermeable shell they live under. The female lays eggs under this shell, which offers them protection. When the eggs hatch, the "crawler" stage is motile and will crawl about on the host plant to select a feeding site. It is during the crawler stage of development that scales are easily killed with insecticides.

Except for the males of some species, adult scales are permanently affixed to a position selected during the crawler stage. Scale infestations frequently go undetected until the infected plants are completely encrusted. Scales insert their needle-like mouth-parts into the host plants to withdraw sap. Scales also secrete a clear sticky substance called honeydew which coats objects below infested plants. Honeydew in turn supports the growth of a black fungus called sooty mold.

Oystershell Scale: Oystershell scales (Lepidosaphes ulmi) are brown and shaped like an oyster shell about 1/8" long. They are found on twigs of lilac, ash, redbud, dogwood, poplar, willow, horse chestnut, elm, beech, walnut, cotoneaster, apple, birch, pachysandra, and other species. They overwinter as white eggs under the scale coverings. The eggs hatch in May, around the same time lilac blooms begin to fade. They achieve maturity by August. There is one generation per year.

Euonymus Scale: Euonymus scale (Unaspis euonymi) is obvious as brownish encrustations of the stems and twigs, and whitish spotting of the leaves, mainly on the underside. The primary host is Euonymus, but it is also found on Pachysandra and Celastris (bittersweet). Females overwinter on stems and leaves. Young crawlers are produced in May or early June. A second generation occurs midsummer.

Fletcher Scale: The Fletcher scale (Parthenolecanium fletcheri) adult female is light yellowish-brown, almost globular, and about 1/8 to 13/64" in diameter. It commonly attacks Taxus, juniper, and arborvitae. Only the females overwinter. They lay their eggs in late May and the eggs hatch by early July. Foliage on the inner portions of heavily infested plants is often blackened by sooty mold growing on the honeydew excreted by the scales. There is one generation per year with crawlers appearing again. 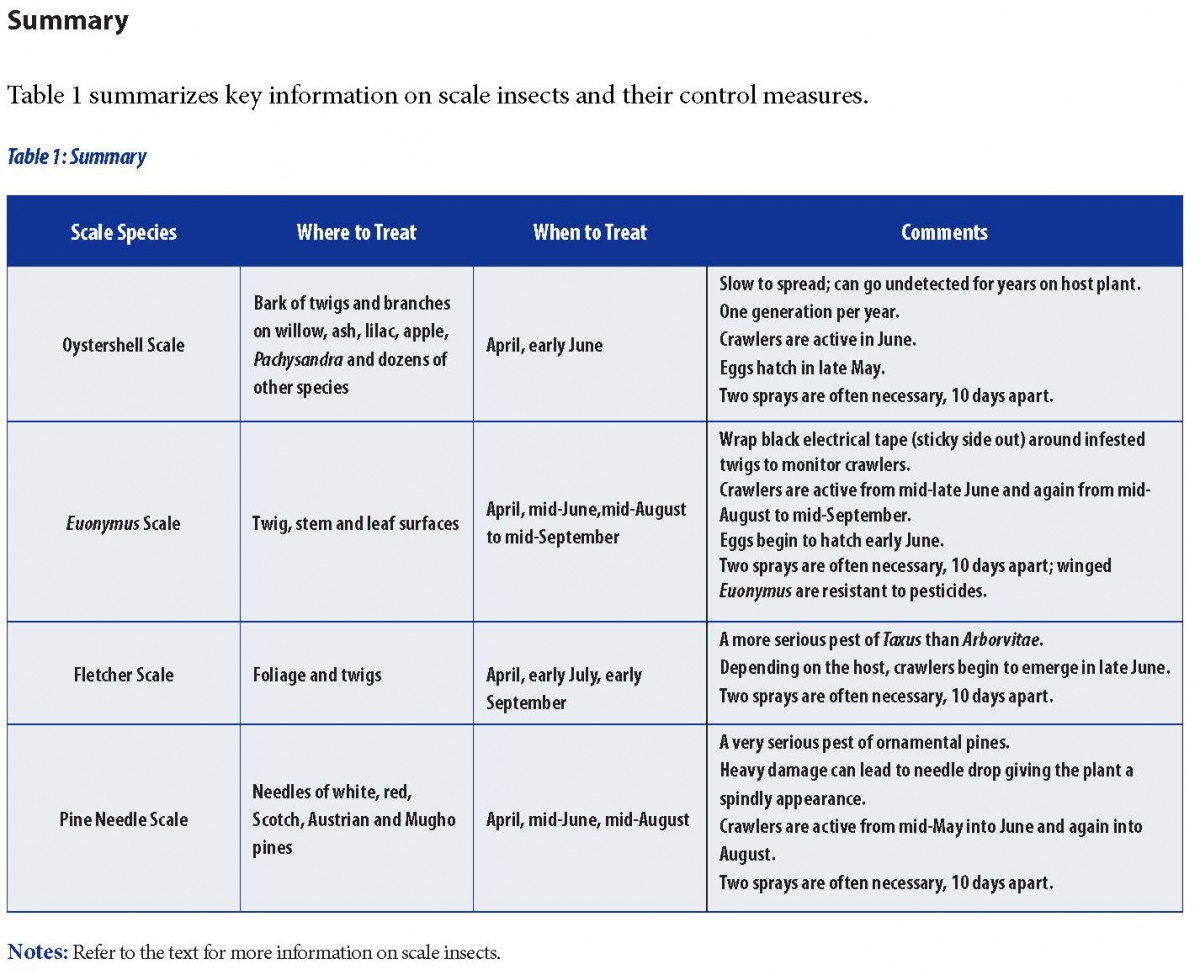