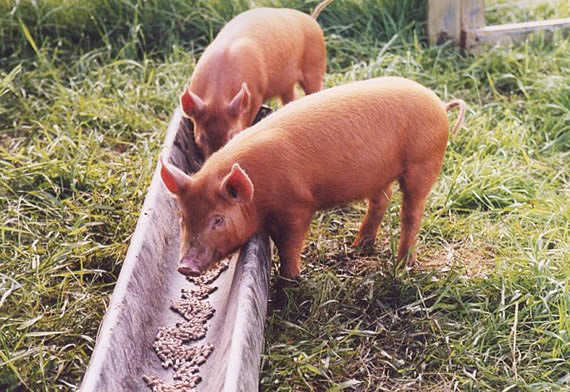 Feed efficiency in swine is about 35% inherited, and 30% growth rate. Selection for more efficient hogs can reduce costs by reducing the amount of feed required to grow a hog to market weight. An average feed conversion is 3.5 pounds of grain for each pound of gain in growing-finishing hogs, or 550 to 750 pounds of feed are required to grow a hog from 40 pounds to 240 pounds live weight.

A sound nutrition program will give good results only when all other conditions are optimal. Quantity and quality of feed are of critical importance. Feed must be palatable and readily accepted to produce the best results. Never feed moldy feeds. Feeding recommendations in this publication are based on requirements determined by the National Research Council (NRC).

Carbohydrates and fats are main sources of energy. Swine are monogastric, omnivores and compared to ruminants, generally require diets higher in energy and lower in fiber. For that reason, significant amounts of grains are often included in swine rations. Grains are a good energy source. Roughage is of lesser importance to swine, although roughages such as alfalfa, corn silage and pasture can be economically used, particularly with gestating sows.

Minerals – calcium, phosphorus and salt (sodium and chlorine) are the most important major minerals added to swine rations. Minor miner­als, which require attention, are: iron, zinc, iodine, selenium, copper and manganese. There are many good mineral supplements on the market today that can be offered free choice.

Vitamins are required in small amounts and are essential for normal body functions. Young grasses or legumes are good sources. When swine don’t have access to good quality pasture, vitamin levels of the ration are of greater concern. Vitamins most often added to swine rations are A, D, E, K, B12, riboflavin, niacin, pantothenic acid and choline. The gestating sow should be receiving at least 7200 international units (IU) of vitamin A or beta carotene and 360 IU of vitamin D per day. 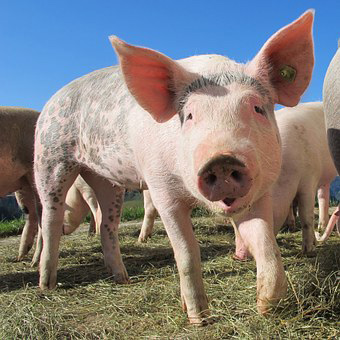 A sound nutrition program will give good results only when all other conditions are optimal. Feed must be palatable and readily accepted to produce the best results. Never feed moldy feeds.

Carbohydrates and fats are main sources of energy. Swine are monogastric, omnivores and compared to ruminants, generally require diets higher in energy and lower in fiber. Grains are a good energy source.

Flushing consists of feeding the sow more feed than is necessary for maintenance and ordinary functions for 2 or 3 weeks before breeding. This puts the sow in a positive energy state and usually increases the number of ovulated eggs, resulting in an increase in litter size. A level of 6 to 8 pounds per day of a properly-balanced gestation ration will usually suffice. Sows nursing large litters are fed at considerably higher levels, so the flushing amounts will need to be fed only from weaning to breeding. Sows normally show estrus within a week after weaning.

Limit-feeding is important during gestation. The ration must be reduced immediately after breeding 4 or 5 pounds per day of a properly balanced gestation ration. If too much energy is fed at this time, embryonic mortality may result. Alternative feedstuffs may be used during gestation. Alfalfa hay and pasture can be used extensively, reducing feed costs. Other feedstuffs such as cooked potatoes, cooked beans, raw soybeans and bakery wastes also may be used, but care must be taken to balance the ration for all nutrients when substituting feedstuffs. (Sodium chloride) should be 0.40 percent.

The sow’s nutrient requirements are highest during lactation. A higher percentage of CP in the ration is recommended. Feed should be gradually increased from the second day after farrowing to a full feed at about 7 to 10 days after farrowing. Sows nursing litters of 8 or more pigs should be allowed all they will eat unless they are over-conditioned. A sow nursing 10 or more pigs may require 14 pounds of dry feed per day. With litters of this size, it’s usually best to feed as much as the sow will eat. A heavily milking sow should be fed approximately 12.25 pounds of a grain-soybean meal swine lactation ration containing 13 percent CP, specifically balanced for amino acids.

If the specific amino acid levels aren’t known, free choice feeding of a ration containing 15 to 16 percent CP, formulated from a variety of good quality feedstuffs, is usually satisfactory. A good swine manager will make adjustments to the amounts of feed fed per sow. For example, if a sow is raising a small litter or is too fat, the daily amount of feed during lactation should be reduced accordingly. Lactation rations should contain at least 0.75 percent calcium and 0.50 percent phosphorus, and the sodium chloride content should be 0.50 percent. Heavily-milking sows should receive at least 11,000 IU of vitamin A or beta carotene and 1100 IU of vitamin D per day.

Replacement gilts may be fed as much as they will eat of growing-finishing rations until they weigh about 200 pounds. They must not be allowed to get too fat. At 200 pounds, replacement gilts should be separated from the finishing hogs and fed about 5 pounds per day of a gestation ration until they completed 2 estrous cycles. They may then be flushed until they are bred 3 weeks later on the third heat period. Immediately after breeding, the ration should be reduced to gestation levels for sows as discussed earlier. Gilts should be bred by the time they are 7 to 8 months old.

Young boars weighing up to 200 pounds should be fed a ration containing about 2 percent higher CP and higher levels of calcium and phosphorus than normal finishing rations. At about 200 pounds the boars may be switched to a sow’s gestation feed in amounts which help them grow but not become over-conditioned. Usually 7 or 8 pounds of feed per day is sufficient. Mature boars may be fed a sow’s gestation feed at about 6 pounds per day. It’s important to maintain the boar in a healthy condition and not allow him to get too fat or too thin. The amount of feed per day should be varied according to environmental conditions. For example, extra feed should be given to the boar during breeding periods of cold weather.

Iron – Pigs which don’t have access to clean soil should be given supplemental iron, either orally or by injection, at 2 to 3 days of age or according to the instructions for the products.

Creep feeding is an economical practice. Beginning at about 7 to 10 days of age, nursing pigs should have access to a properly-balanced, complete pre-starter or starter ration. Excellent pre-starter and/or starter rations are available commercially, and it’s often more practical to purchase a pre-starter feed than to formulate one. Pre-starter and starter rations range from 18 to 22 percent CP or higher and are properly balanced for amino acids, minerals and vitamins. Pigs gain very efficiently during the nursing period, and the purchase of a top-quality creep feed is a wise investment.

The growing-finishing period extends from weaning to marketing at about 220 pounds. Pigs should have access to a properly-balanced ration on a free choice basis. The protein requirement, as a percentage of ration, decreases as the body weight increases. If rations based on grain and soybean meal are balanced for amino acids and fed free choice, the following NRC recommendations for protein, energy, calcium and phosphorus for growing-finishing pigs should be adequate.

Rations other than the traditional grain-soybean meal-based ration can be used, particularly during the finishing phase (more than 100 pounds live weight). When specific information about amino acid composition is not available, a general rule of thumb is use a variety of good quality feedstuffs and increase the CP by 1 to 2 percent. The energy levels of the ration also should be calculated because many alternative feedstuffs have lower ME values. The salt content of growing-finishing rations should be 0.23 percent.

Self-feeding is the most efficient method of feeding swine in that the animals may feed at will from a unit containing large amounts of feed. Normally, they won’t over-eat. It’s important, however, to make sure pigs aren’t wasting feed and the feed doesn’t “bridge” in the feeder and not deliver. Be sure self-feeders are weather proof and the feed does not get wet or moldy.

Corn is the standard grain and soybean meal is the most commonly-used protein supplement in swine rations. However, New England pork producers can reduce feed costs by using alternative feedstuffs. Care must be taken to be certain the ration is nutritionally balanced, and a knowledge of the limitations and proper use of substitution feedstuffs is necessary.

Various methods of processing are used to improve the palatability and consumption of feedstuffs. Pelleting improves feed conversion and is very popular for starter rations. Grinding and mixing ingredients is often beneficial for growing-finishing swine and the breeding herd. The addition of fat to the rations of swine of a certain age or at a certain stage of production often improves performance. For further information, read UNH Cooperative Extension’s publication Alternative Feedstuffs for Swine.

Download the Resource for the complete printable fact sheet.