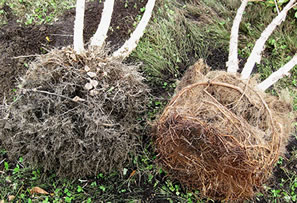 UNH and UMass researchers were funded by USDA to do an economic analysis of three production methods for landscape trees: field grown, pot-in-pot container production, and in-ground fabric containers. Concern over soil removal from field nurseries was one of the reasons behind this project, but researchers also evaluated how each system affected plant growth, root morphology and cost of production. Field trials were conducted between 2010 and 2013 in Massachusetts and New Hampshire.

A survey of landscape and nursery professionals was conducted to assess attitudes about and demand for bagged or potted trees as alternatives to B&B products. One clear result was that there is high interest in and demand for regionally-grown trees and shrubs.

Getting to the Roots: Production Effects on Tree Root Growth and Morphology (American Nurseryman, July 2014)

Watch these short videos for more information about the project, and to learn how trees are produced in nurseries.

Comparing Production Systems for New England Nurseries was filmed at the beginning of the research project. Planting methods for each system, including the costs involved, are shown and the advantages and disadvantages of each production system are discussed.

Production Methods for Landscape Trees (Fall 2011) compares field-grown river birch trees with those grown in in-ground fabric contrainers and in a pot-in-pot system. The root structure and morphology is highly modified by the production system.