On a Tuesday evening in April, fifth graders at Oyster River Middle School (ORMS) in Durham are giving their parents a crash-course on climate change. The students, broken up into eight groups, are scattered throughout the school’s library. Each group has a poster they’ve created that addresses a different facet of climate change and the students are busy answering questions from the audience of parents roaming the room.

Take a moment to listen in and you might confuse the middle schoolers for seasoned experts. A group of students that examined the potential benefits of climate change has a series of rapid-fire answers ready when a parent asks how they’d feel about potentially growing mangos in New Hampshire, but also losing sugar maples.

“It would be sad. We wouldn’t have maple syrup anymore,” one girl says.

Without missing a beat, a boy in the group speaks up: “And then, we’ll have to ship maple syrup from out of state.”

“Which will use more fossil fuels,” another girl says.

“Unless,” the boy replies, “We use Teslas or electric vehicles to transport it.” 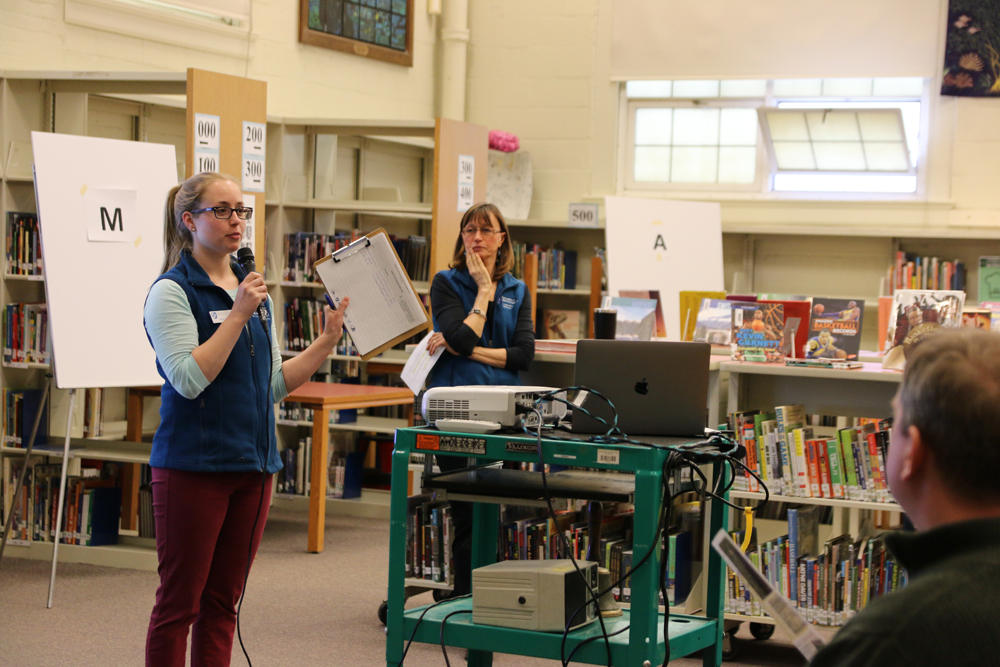 Scenes like this are common for Climate in the Classroom, a partnership between UNH Extension and NH Sea Grant that connects Seacoast students and their parents with the latest information on climate change and how local communities are preparing for the future.

“Through Extension and Sea Grant, we work with coastal communities to figure out what they can do to adapt to a changing climate,” says Amanda Stone, a natural resources and land conservation specialist with Extension. “As we’ve done programs in the past, we’ve found there’s a large audience we’re not reaching: parents of middle school children. They’ve got kids involved in sports and they have a lot going on. We wanted to develop a program that works for them, but also educates students in middle school.”

Stone and Lisa Graichen, climate adaptation program coordinator for Extension and Sea Grant, have facilitated Climate in the Classroom twice before with students in Oyster River and Hampton Falls. The program is just one of Extension and Sea Grant’s efforts to help local communities deal with climate change. Last fall, Graichen and Stone facilitated a public workshop in Madbury in which residents discussed ways for the town to address the effects of climate change.

“Climate change can feel like a huge global issue, and it is, but many communities in the Seacoast are taking real steps and making real progress,” Graichen says.

"I’m hoping us talking about this makes a difference."

The recent ORMS event marked the program’s third round of student-led presentations.

“It’s critically important for students to examine the truth and question information and look at all the evidence behind what they’re learning, and we thought that Lisa and Amanda examined the issue of climate change from all angles,” says Chris Hall, a fifth grade teacher at ORMS. “The program provides a look at an authentic issue students are going to be dealing with their whole lives. We want them to see the different facets and review the latest science.”

Fifth graders spent more than a month researching climate change-related topics, from the difference between weather and climate and preparing for the impacts of climate change to the downsides and potential benefits of climate change. The students then used their research to create posters explaining their findings and developed a five-minute scripted presentation to share with the public. 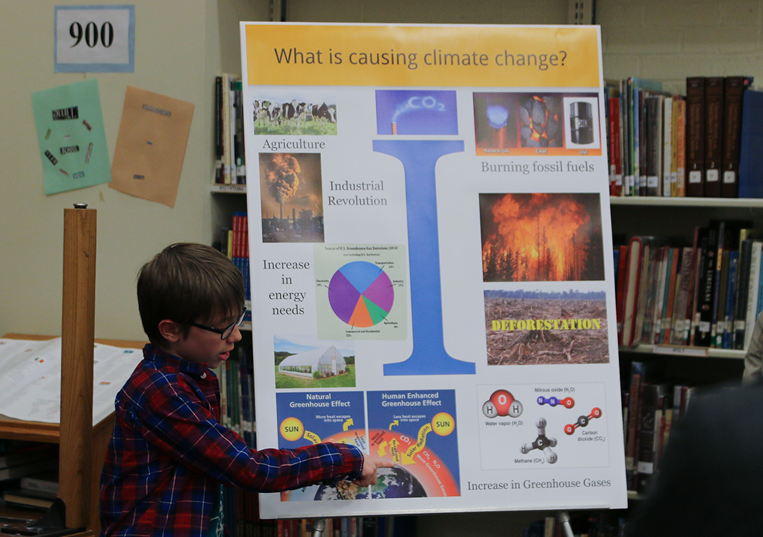 In the ORMS library, fifth graders fielded questions and shared the latest climate change research. According to one group’s research, sea levels on the New Hampshire coast will rise at least one foot in the next century — an amount that could increase if nothing is done to stem the effects of climate change. Granite State winters will become shorter and warmer, which students said could lead to longer growing seasons, but a radical change in the fruits and vegetables harvested in the state. Other groups offered suggestions for mitigating the effects of climate change, from investing in green energy to requiring coastal homes to be built on stilts.

For some students, the research was particularly eye-opening. Fifth graders Hannah Dunbar and Emma Binzen-Hempfling explained the difference between climate and weather during their presentation.

“I liked talking about all the different kinds of weather,” Binzen-Hempfling says. “It was a lot of fun, and just being here was awesome.”

But more than that, both students are hoping their presentations have a broader impact.

“I’m hoping us talking about this makes a difference,” Binzen-Hempfling says.

“Yeah,” Dunbar agrees. “It’s great knowing that people might actually do some of these things to help.”

Did you enjoy this story?  Get more delivered right to your inbox.