The Harry Potter series by J.K. Rowling has brought magic into the homes of millions of families across the world. Along with the elements of fantasy — the potions, spells, flying broomsticks and wands — come real-world examples of astronomy and mythology.

This is where John Gianforte’s expertise shines as bright as Sirius (the brightest star in the sky).

Gianforte is known affectionately throughout New Hampshire as “The Sky Guy,” and he has joined UNH Extension as a state specialist to develop and conduct space-oriented programs for volunteers, educators and youth. He will also continue to serve as the director of the UNH Observatory and as an instructor in UNH’s College of Engineering and Physical Sciences.

The world of Harry Potter provides an accessible way to introduce youth and their families to the magnitude of the sky – its stars, moons, planets and galaxies.

Stories of the Sky

Gianforte explains that about 5,000 years ago in Babylon the creation of constellations put mythology into the night sky.

Having studied classics while a university student, it’s no wonder why J.K. Rowling chose to weave astronomy and mythology into her magical world. In her series, centaurs (beings that are half human, half horse) live in the Forbidden Forest and are constantly looking up at the night sky to make observations with quips like, “Mars is bright tonight.”

Students at Hogwarts School of Witchcraft and Wizardry enroll in astronomy, which means climbing up to the Astronomy Tower at midnight to learn how to interpret star charts and memorize moons. Perhaps the most noticeable connection to the stars throughout every book comes from the actual names of characters, which are directly linked to stars and constellations. Gianforte shares a few examples:

Draco Malfoy: Draco (meaning “dragon” in Latin) is a constellation close to the North Star. It is the eighth largest constellation and looks like a snake.

Andromeda Tonks: Andromeda is the princess in Greek mythology that Perseus rescues from the sea monster. In the night sky, Andromeda is a constellation. The Andromeda Galaxy is 2.6 lightyears from our Milky Way Galaxy.

Sirius Black: Sirius is the brightest star in the night sky. It is in the Canis Major constellation (which translates to “great dog” in Latin).

“On any given night and when the moon isn’t in the sky, we can see about 2,000 stars with the unaided eye — without a telescope or binoculars. But there are many more than that,” says Gianforte.

“It’s important to study space because what happens out in space affects us here. Things that go on in space do affect people and things on planet Earth. Some of them are harmless and beautiful, but some of them can be dangerous. And the more we know about them — how they work, why they happen — the better we will be able to protect ourselves.”

Gianforte also acknowledges how special it is to view Earth from space. “In the International Space Station, in a special room called the Cupola, astronauts get to look down upon the Earth where there aren’t any borders or boundaries between countries that are visible. No differences in politics or religion. Everybody’s the same,” he says.

Interested in learning more? Gianforte put together an hour-long webinar about the astronomy of Harry Potter, which also includes the history of Muggles (non-magic folk) who have studied the sky such as Aristotle, Claudius Ptolemy, Nicholas Copernicus, Tycho Brahe, Johannes Kepler, Hans Lipperhey and Galileo Galilei. 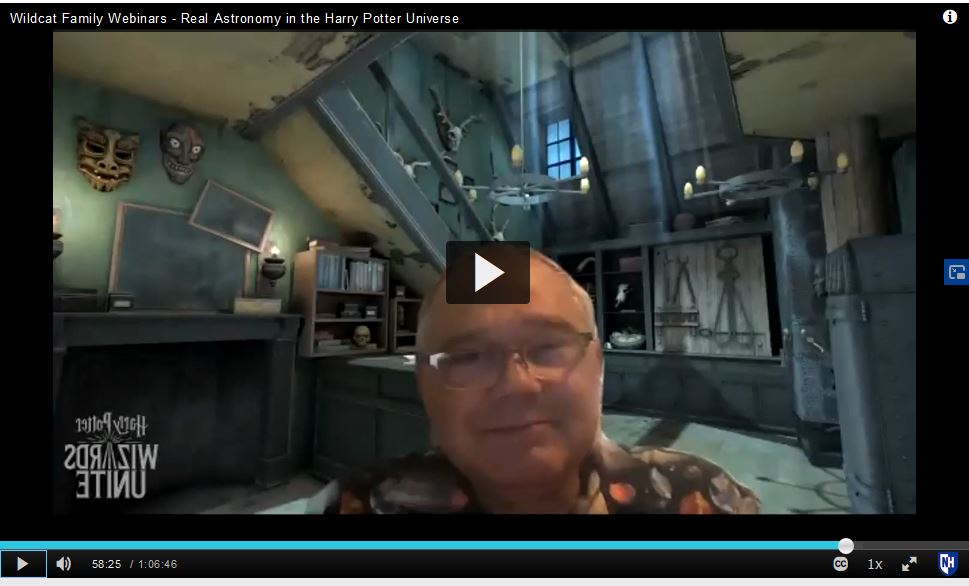 With over thirty years of professional experience, Gianforte has shared his astronomical knowledge with New Hampshire Public Radio, New Hampshire Public Television, The Weather Channel, the Christa McAulife-Shepard Discover Center in Concord and the Town of Durham — where he is the Parks and Recreation astronomer, leading monthly night sky excursions for residents.