The European corn borer (Ostrinia nubilalis) was introduced into the U.S. in 1917. Broken tassels, collapsed stalks, feeding signs on leaves, and borings in stalks and ears are signs of the presence of European corn borer larvae. The insect occurs in nearly all of the major corn-growing areas of the U.S.

Full-grown larvae are 3/4 to 1" long and are flesh-colored with a brown head. Rows of light brown spots run the length of the body. The brown pupae are surrounded by a flimsy cocoon.

Adult moths have a wing span of about 1". Wings are usually folded over the body. Males have mosaic markings in bronze, yellow, and beige. Females have similar markings, but are slightly larger and paler than males.

The eggs can be found on the underside of corn leaves, along the midrib. They are laid in groups and look like fish scales. The color of the eggs changes over time, starting off a translucent light green and becoming darker when hatch is imminent.

There are two generations of European corn borer per year in southern New Hampshire, but only one generation further north. This pest overwinters as a full-grown larva in corn stubble, corn refuse, and other plants. In spring, larvae pupate. Moths emerge from June to August, with a second generation occurring in August.

Each female lays an average of 500-600 eggs. The eggs hatch into larvae in about a week, and the young larvae begin to feed on leaves, making small holes and leaving a sawdust-like frass. Larvae migrate into growing whorl of leaves where they eventually bore into the forming tassel. Infested tassels break when mature. As the larvae continue to grow, they eventually bore into stalks, usually at the internodes, and some find their way to the ears by boring through the side or the stem end of the ear. Heavily infested corn is easily lodged, making picking difficult. Some larvae move down the silk channel and attack ear tips. Mature larvae pupate in the cavities and some emerge as adult moths to start the second generation in August. 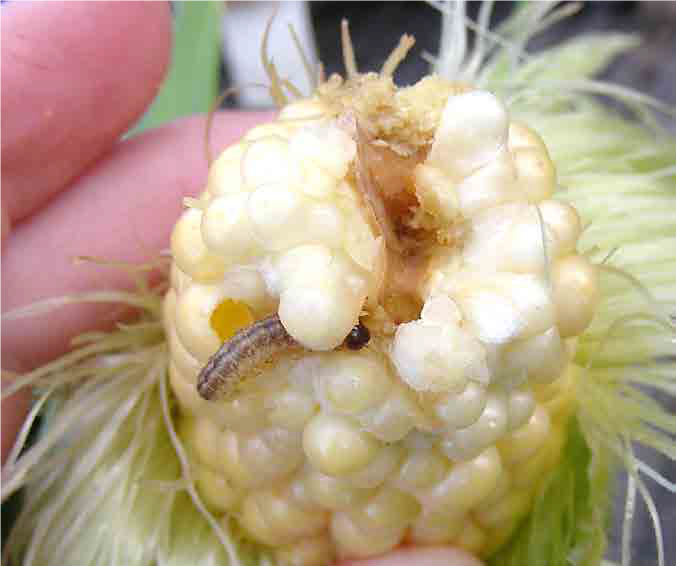