One of the many subjects that ecologists investigate is how living things interact with their environment.  One way we can study ecology is by exploring natural habitats.  Pillbugs (roly-polies) provide an interactive opportunity to learn about ecological concepts in your own backyard or community.

A fun activity to do with children outside is to turn over rocks, logs and leaf litter.  Observing with them and asking them what they see is a great start to a science investigation.

If you haven’t done this before or have a moment go lift something up in your yard— a rock, log, patio stone, garbage can— anything that could be a hiding place for small creatures.

Observe what you see?

Anything new and different?  Creepy crawlies?  Dead grass?  Soil?  Grains of sand? You probably saw a lot of little creatures scurrying away, maybe some plant roots, soil or perhaps a salamander, if you were lucky.

One of the little creatures you may see is a pillbug.  The pillbug is a harmless, easy to find and take care of and allows for scientific observation and investigations. 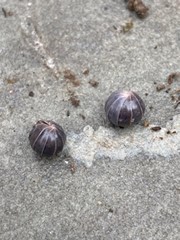 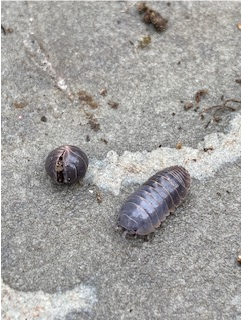 When studying ecology, we are looking at how living things interact with the other living and non-living things in the world around them.  We examine how  animals are affected by light, moisture, and temperature (non-living things).  We also look at interactions between organisms like predation or competition (living things).  These interactions can occur between species and within species.  For example, a pillbug may compete with other pillbugs for the best rotten leaf pile in your backyard.  It also might be eaten by predators such as a spider, frog, shrew or mole.

Organisms have many adaptations to help them survive competition and predation, including where they live, when they are most active or how they handle cold or hot weather.  Pillbugs have very interesting adaptations.

Pillbugs have adapted to live on land.  They burrow into the soil and live under rocks and woody debris. They choose habitats that are dark and damp to stay moist and to avoid dry air or extreme temperatures.  They are also nocturnal and huddle with other pillbugs to stay warm.  In the food web, pillbugs are detritivores, which means they eat dead organic material.

The pillbug can be mistaken for another terrestrial isopod called a sowbug, but they differ in one way—what they do when they get threatened.  One rolls up, hence the name roly poly, and one runs away because its body does not allow it to roll up.

If you would like to learn more about pillbugs and sowbugs, there are some great websites out there.  For now, let’s get onto our investigation!  The suggestions below are intended for youth in grades 3-5, however, they can be adapted for younger and older audiences.

The very first thing we’ll do is go outside and observe the pillbugs in their natural habitat.  Using the information written above, think about where you might find them—dark, moist places where there is dead material, like rotting leaves, wood or plants.  They are harmless and cannot hurt us, however, we can unintentionally harm them.  Use a popsicle or craft stick to move leaves, debris or soil around.  Use plastic spoons to pick them up, staying close to the ground if they fall off.  In this first observation, ask youth to record the following information: 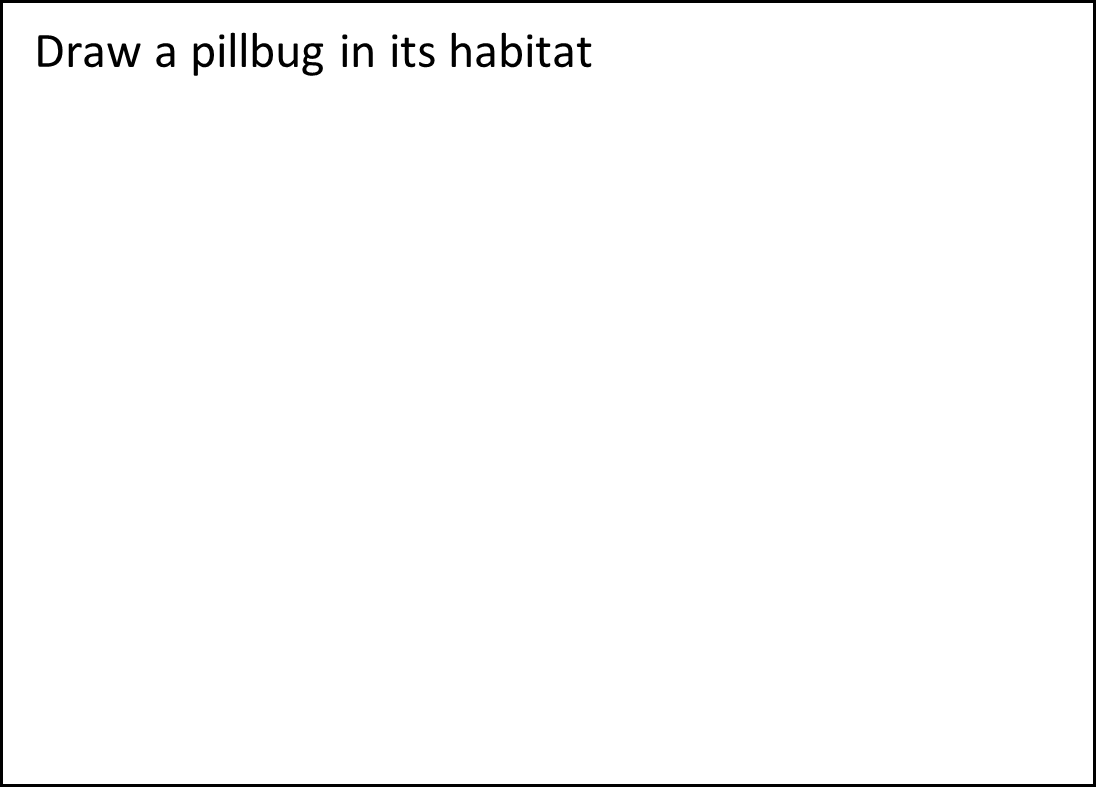 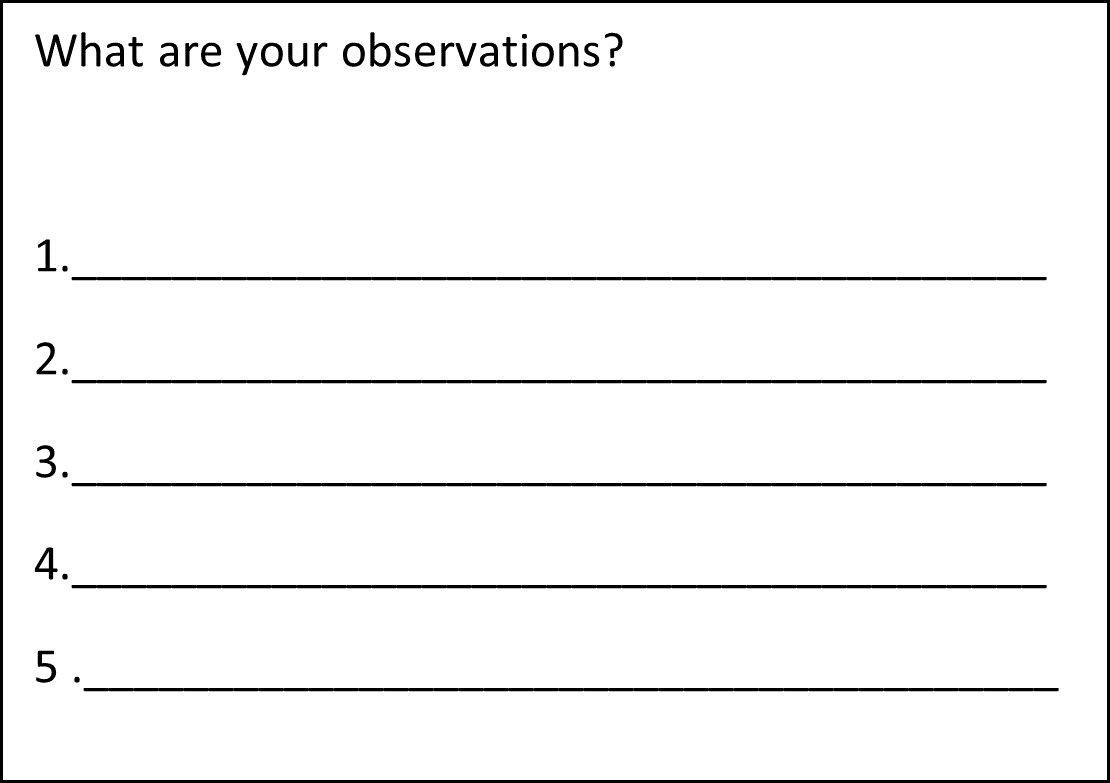 Habitat:  Where did you find the pillbug?  What was the temperature like there?  Was it wet or dry?  What was it like in the pillbug’s habitat that is different than the surface of the ground?

How long do pillbugs live for?

Why do pillbugs live under rocks?

Examples of questions that can be investigated would look like this:

Do pillbugs prefer dark or light places to live?

If given a choice of dirt or paper, where does the pillbug prefer to go to?

Are pillbugs threatened by other pillbugs or sowbugs?  What do they do when I put other organisms into their habitat?

Now that students have made observations, generated questions and learned more about pillbug biology, we can move on to more investigations.  Depending on your budget, time and how many youth you are working with, investigations can take many different routes.

In order to do investigations over several days, you may want to build your own pillbug habitat to encourage a colony to form.  A habitat consists of a container with a lid that has small air holes poked through.  The habitat should be kept in a cool dark place away from direct sunlight. 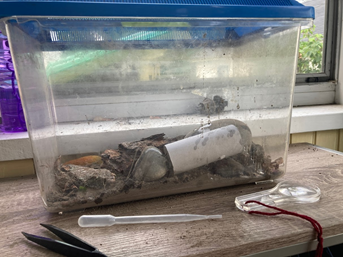 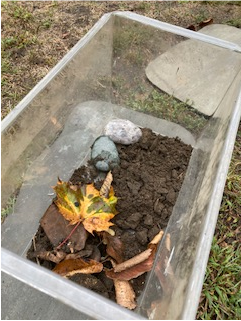 Cover the bottom of the container with sand on one side and soil on the other.  To keep moisture in the habitat, keep a damp paper towel folded up on the bottom.  Be sure to wet the paper towel each day. Then add natural materials that would typically be found where pillbugs live.  This would include rocks, bark, twigs and leaves.  You can add carrot shavings and lettuce to the sandy side of the habitat for food.  Now it’s time to add your pillbugs!  Head outside with your popsicle stick and plastic spoon to collect the pillbugs.

Afteryou have a new colony of pillbugs, you can begin conducting investigations into their behavior.  Look back at the questions that were created earlier and decide which question you’d like to explore first.  I’ll share an example below.

What do you want to find out? In your own words, describe the scientific question that the investigation seeks to answer.

Do pillbugs prefer to be in the dark or in the light?

I will investigate my question by putting a cover over one side of a shoebox and leaving the other side of the lid open to the natural light.

The response variable. The variable that you will observe as it responds to changes in the independent variable.

I will observe where the pillbugs prefer to be by counting the number of pillbugs on each side of the shoebox.

What will remain the same?

What are the step-by-step activities? How will data be recorded? What will be the means of analysis?

Results:  What did you find out?

Other behaviors that are fun to investigation with pillbugs are

Pillbugs are such fascinating little creatures with many different adaptations and behaviors that bring wonder to children.  Enjoy watching and investigating with these captivating creatures!

If you are interested in assessing learning during pillbug investigations, there are many Next Generation Science Standards (NGSS) science practices that students are using such as asking questions, designing investigations, creating models, engaging in argument from evidence, communication information and more.  They are also learning key concepts about ecological interactions and biology.  This resource connects to the NGSS through:

Construct an argument that some animals form groups that help members survive. Science and Engineering Practice:  Engaging in Argument From Evidence

Crosscutting Concept:  Cause and Effect