Vernal pools are wetlands with a seasonal cycle of flooding and drying. Some vernal pools flood in the spring with water from melting snow, rain or high groundwater and then typically dry by summer’s end. Other pools follow a similar pattern, but fill with rain in autumn, hold water all winter and spring, and then dry out by late summer. The annual drying cycle of vernal pools makes them different from other wetlands and plays a key role in determining which wildlife species uses which pools as habitat.

Some sunnier vernal pools may contain sphagnum moss, sedges, ferns and shrubs such as high-bush blueberry or buttonbush. Red maple and eastern hemlock commonly grow on the edges of vernal pools, although pools may be found in many different forest types. Dry vernal pools can sometimes be identified by the presence of dark, matted leaves within a depression in the ground.

Why are Vernal Pools Important?

Fish are top predators in wetlands, but they can’t survive in pools that dry out.. As a result, vernal pools provide key breeding habitat for amphibians whose tadpoles and larvae are especially vulnerable to fish predation: wood frogs, spotted, blue-spotted, and Jefferson’s salamanders. In the spring, these amphibians migrate from nearby woodlands to vernal pools– where they breed and deposit their eggs. Once hatched, tadpoles and larvae develop quickly into young frogs and salamanders that must leave the wetland before it dries up – by early or mid-summer for wood frogs, or by late summer or early autumn for salamanders. 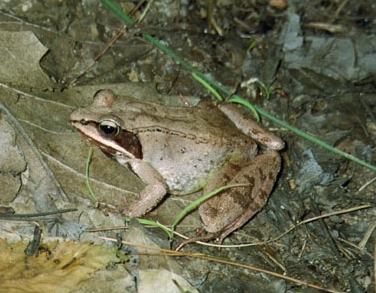 Other species besides amphibians use vernal pools as habitat. Fairy shrimp (at right) are small crustaceans that require vernal pools for breeding. Spotted and Blanding’s turtles, great blue herons, raccoons and predatory insects travel to vernal pools to feed on amphibian eggs, tadpoles, insects and crustaceans in the pools. 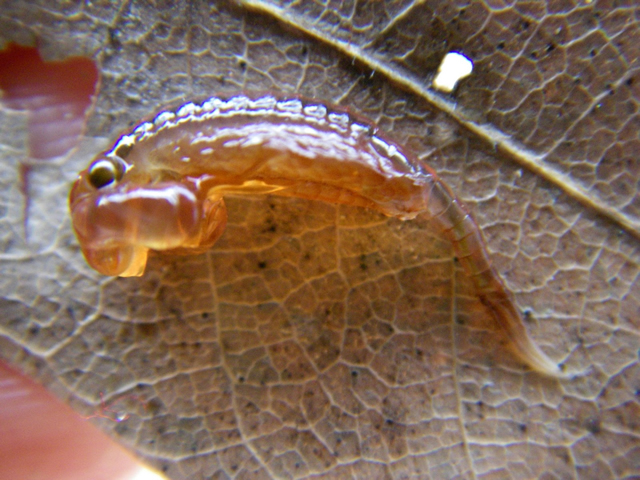 Where do Vernal Pools Occur in New Hampshire?

Vernal pools can exist almost anywhere—in forests, fields, shrub swamps, marshes, or in gravel pits. They can be smaller than one-tenth acre or larger than two acres. Vernal pools occur as isolated wetlands (not connected to other wetlands), as part of larger wetlands (for example, a vernal pool within a scrub-shrub swamp), or in floodplains along rivers. Vernal pools in woodlands are often small enough that the forested canopy remains unbroken above them, staying shady and cool throughout the growing season. These may be overlooked, appearing as simple pools of water in the forest, with little vegetation growing in them.

Vernal pools exist in all parts of the state, but are most common in the flatter regions of central and southeastern New Hampshire. Vernal pools are scattered across the landscape and are easily overlooked in wetland inventories. As a result, most vernal pools haven’t been adequately mapped, and scientists don’t know how many pools have already been lost to development.

Understanding the Threats to Vernal Pools

The impact of human development on vernal pools is the most significant threat to these habitats and their associated wildlife. Development, road-building and re-grading of land can fill and destroy vernal pools, causing immediate loss of habitat and (for some species) permanent loss of populations. Many amphibians breed in the pools where they hatched, returning to the same pool every year. If one pool is lost, the pool’s returning amphibians may be lost as well. Although many vernal pools meet the state regulatory definition of a wetland, some pools either don’t meet the definition (for example, no vegetation) or are overlooked during wetlands’ mapping due to their small size and isolation. If construction of a new development will affect wetlands, it is often the small pools which are chosen to be filled.

The time most amphibians spend in a vernal pool is short but critical. They breed in the pool, but they spend about 11 months of the year in the surrounding woodlands, usually within 600 yards of the wetland. So, even when development plans avoid direct impacts to vernal pools, some amphibians may be lost if the woods surrounding the pool are significantly altered. Indirect impacts of development such as changes in water flow, changes to the water table, increased pollution, and the removal of forested canopy near pools can combine to degrade or destroy the habitat value of nearby vernal pools.

Click here for the Seasonally Flooded Wetlands Climate Assessment, a section of the Ecosystems and Wildlife Climate Change Adaptation Plan (2013), an Amendment to the NH Wildlife Action Plan

The species listed here are closely associated with vernal pools, but many other wildlife species will use vernal pools at some time of the year for breeding or foraging. Species of conservation concern--those wildlife species identifiedin the NH Wildlife Action Plan as having the greatest need of conservation--appear in bold typeface with links to their species profile from the Plan.

NH Fish & Game publishes a website about reptiles & amphibians in NH with identification photos for all species. Many of the links below connect to these Fish & Game webpages.

Research for this webpage and accompanying Habitat Stewardship brochures was conducted by UNH Cooperative Extension staff with support from the Sustainable Forestry Initiative and NH Fish & Game.