White grubs are the larval or grub stage of several species of beetles and chafers. The two most troublesome species in New Hampshire are the European chafer (Rhizotrogus majalis)and the Japanese beetle (Popillia japonica). These beetle larvae are usually C-shaped and can be found feeding among grass roots. They are typically cream-colored with a brown head. They also have a dark area at their posterior end; this dark area actually is their body contents showing through their skin. White grubs feed on grass roots and most complete their development in one year.

Japanese Beetle: The adult Japanese beetle is about 1/2" long with a shiny, metallic-green head and body. The grubs are usually small with light brown heads. The rastral pattern on the grubs forms a V (the raster is on the last segment of the grub and is formed of hairs).

European chafers lay their eggs in late June; Japanese beetles in July and August. The eggs hatch and the young grubs begin feeding on grass roots within one to two weeks. Dry soils in July and August cause many eggs to die from moisture stress. Grubs feed until fall and then burrow deep into the ground to overwinter.

In spring, grubs burrow upwards to grass roots, resume feeding until late May, and then transform into pupae. Adult Japanese beetles emerge around the first week of July; European chafers about two weeks earlier.

Evidence of an infestation of white grubs appears as grass begins to turn brown due to root damage. Usually the turf can be rolled back like a rug to reveal grubs. Mole or skunk damage indicates the presence of grubs. 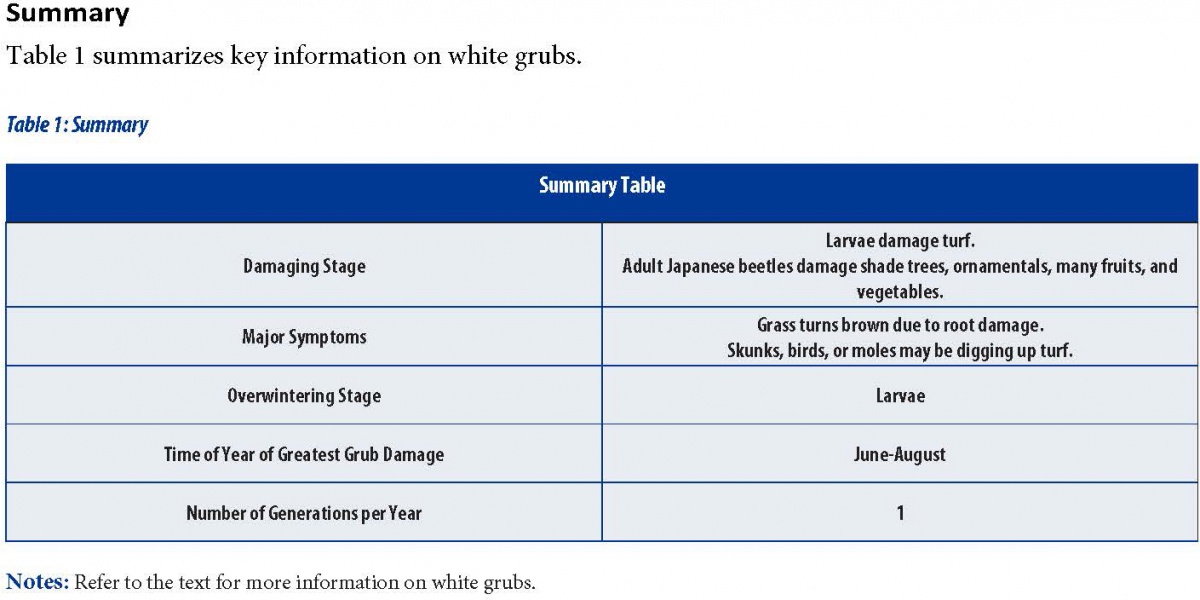