by Gabe Roxby, field forester, Society for the Protection of New Hampshire Forests (aka the Forest Society)

A field note is a report from "the field," based on observation and experience. 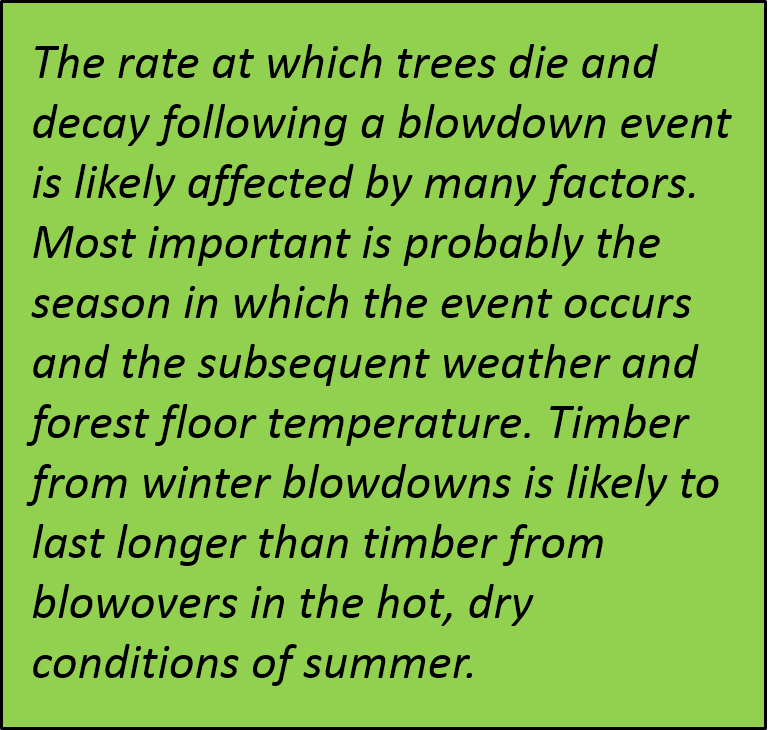 On March 2, 2017, a wind-event toppled mature pine trees on a Lyndeborough property owned and managed by the Forest Society. The forest had been the recent site of a shelterwood harvest, and the remaining trees were good quality and vigorous. Despite this, the wind event was strong enough to blow down about 30 mature white pines, prompting us to consider whether or not we should salvage the trees. Since the economics would have been break-even, and since the property was enrolled in a Natural Resource Conservation Service (NRCS) contract partially aimed at increasing dead and downed wood, we decided to leave the pines as they lay.

During the decision-making process, however, a simple question arose. How long would the pine trees last before they were invaded by insects and fungi that would render the timber’s value worthless? We asked around a bit, and it turns out the answer to this question was not well-known. The research we found on the longevity of cut pine logs, did not apply to our situation, where the pine trees were still partially connected to their root system and had live needles in their crowns. Isabel Munck, Plant Pathologist with the U.S. Forest Service, expressed interest in examining the site to learn more. If we had the question, she reasoned, others might also. How long would the timber in the toppled pine trees last?

Isabel, along with the property’s longtime volunteer land steward, Forest Society staff and interns tagged trees and collected information. We peeled the bark off many trees and examined them for signs of insects and fungi. The pine engraver beetle (Ips pini) can detect the smell of dead pines and arrive onsite within a matter of days. This beetle is thought to be the main vector of several types of sap stain fungus which can turn wood blue and greatly decrease its monetary value. Though this fungus does not harm the wood’s structural strength, many sawmills will not take wood that shows sign of this stain.

We discovered the pine engraver beetle as well as several other types of insects that are attracted to dead or dying trees. About 2/3 of the blown-over trees showed signs of sap stain fungus. About 1/3 of the trees, despite being on the ground, were still living (green needles) and had not yet been invaded by insects or any sap stain fungus. The timber in these trees was still salvageable about 5 months after the blowdown. A follow-up a month later (6 months after the wind-event) revealed that about 20 percent of the blown-over trees were still unaffected by sap stain fungus.

The rate at which trees die and decay following a blowdown event is likely affected by many factors. Most important is probably the season in which the event occurs and the subsequent weather and forest floor temperature. Timber from winter blowdowns is likely to last longer than timber from blowovers in the hot, dry conditions of summer.

More information on the timing of blowdowns would be useful in planning salvage operations following extensive blowdowns. What experiences have other folks had with regards to the longevity of blown-over pine? Perhaps the foresters that were around following the 1938 hurricane had a better sense of these types of issues than we do today!

Pictures taken on August 11, 2017. Click on the images below for a closer view. Photo credits: Forest Society