by Ethan Belair and Dr. Mark J. Ducey, Dept. of Natural Resources and the Environment, University of New Hampshire and researchers at NH Agricultural Experiment Station

A field note is a report from "the field," based on observation and experience.

There are many roadblocks to successful stand management in the northeast. Some issues apply regardless of where the stand is located: effects of past land use, the need to ensure desirable regeneration, and limited time and resources will nearly always constrain prescriptions. Conversely, choices like which silvicultural systems to use or how to control invasives may change drastically depending on property size, proximity to suburban areas, or a specific landowner’s goals. With so many variables to consider, the flexibility of silvicultural systems is often key to achieving our objectives. 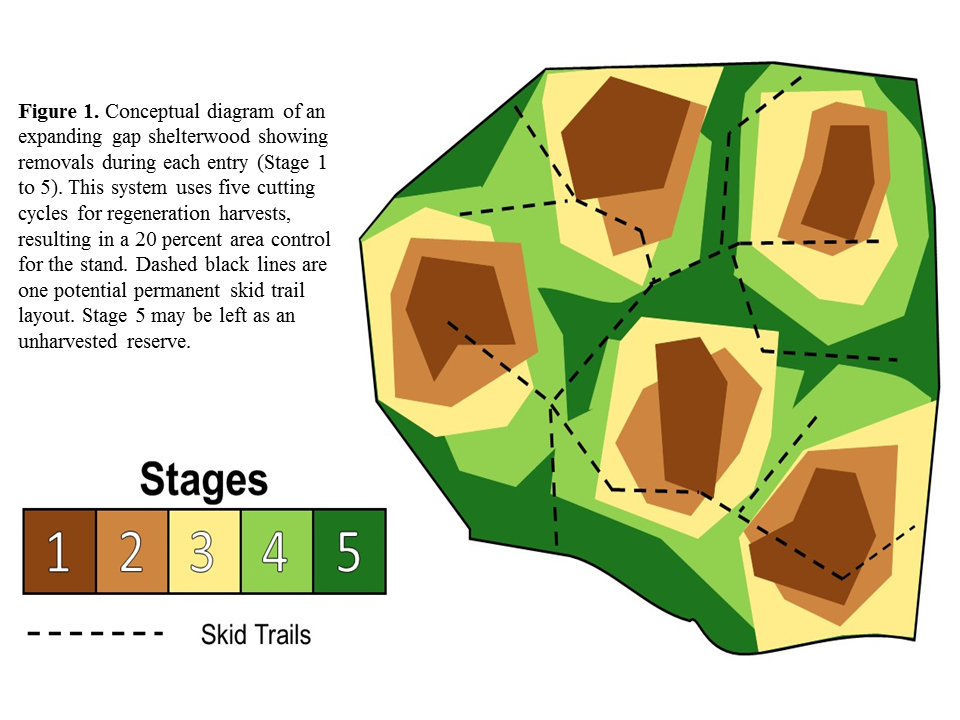 Usually, expanding gap shelterwoods are applied using a 100-year rotation, with multiple entries during the first half of the rotation. Entries occur every five to 15 years, and entail harvesting approximately 20 percent of the total area in a series of small groups. Initial groups should be one to two tree-heights in diameter, resulting in canopy openings of 0.25 to 1.0 acre (Figure 1, Stage 1). Each subsequent entry (Figure 1, Stages 2 to 5) will create a new series of gaps immediately adjacent to the previously established gaps. This is the expanding element of the expanding gap shelterwoods—initial gaps will be expanded through successive harvests until their borders join to create larger, continuous openings.

While its standard application involves five entries and the eventual removal of 100 percent of the original overstory, this system is very flexible and can be adapted to fit a number of different situations and objectives (Raymond et al. 2009). The number of entries can range from three to eight depending on landowner needs. Timing and location of all entries remain flexible, and can be shifted in response to the location and development of advanced regeneration. Residual groups of unharvested trees may be retained indefinitely as biological legacy trees. Group harvests can be paired with thinning from below in the matrix areas to further increase advance regeneration prior to gap expansion. Secondary groups can either completely surround the initial gaps, or be restricted to a single side of the gap where advance regeneration is well-established. Most elements of an expanding gap shelterwood system can be tailored to the conditions at a particular site.

There is one component of the system that should not vary: following the initial entry, all successive harvests should remain connected to the initial gaps. There are a variety of silvicultural and practical benefits to maintain this expanding gap structure. Most importantly, the light conditions created by gap expansion is ideal for many mid-tolerant species (Arseneault et al. 2011). Gaps created in the first entry maintain enough shade to suppress fast-growing intolerant species, allowing mid-tolerants such as white pine and red oak to get a head start (Figure 2). Following gap expansion, light availability is increased, which can lead to increased competition from undesirable intolerants. However, the initial head start allows the mid-tolerants to remain competitive. Conditions at the edge of this new, larger gap and into the matrix forest are now ideal for establishment of more mid-tolerant seedlings (Figure 3). These pools of advance regeneration can help guide the location of subsequent entries. 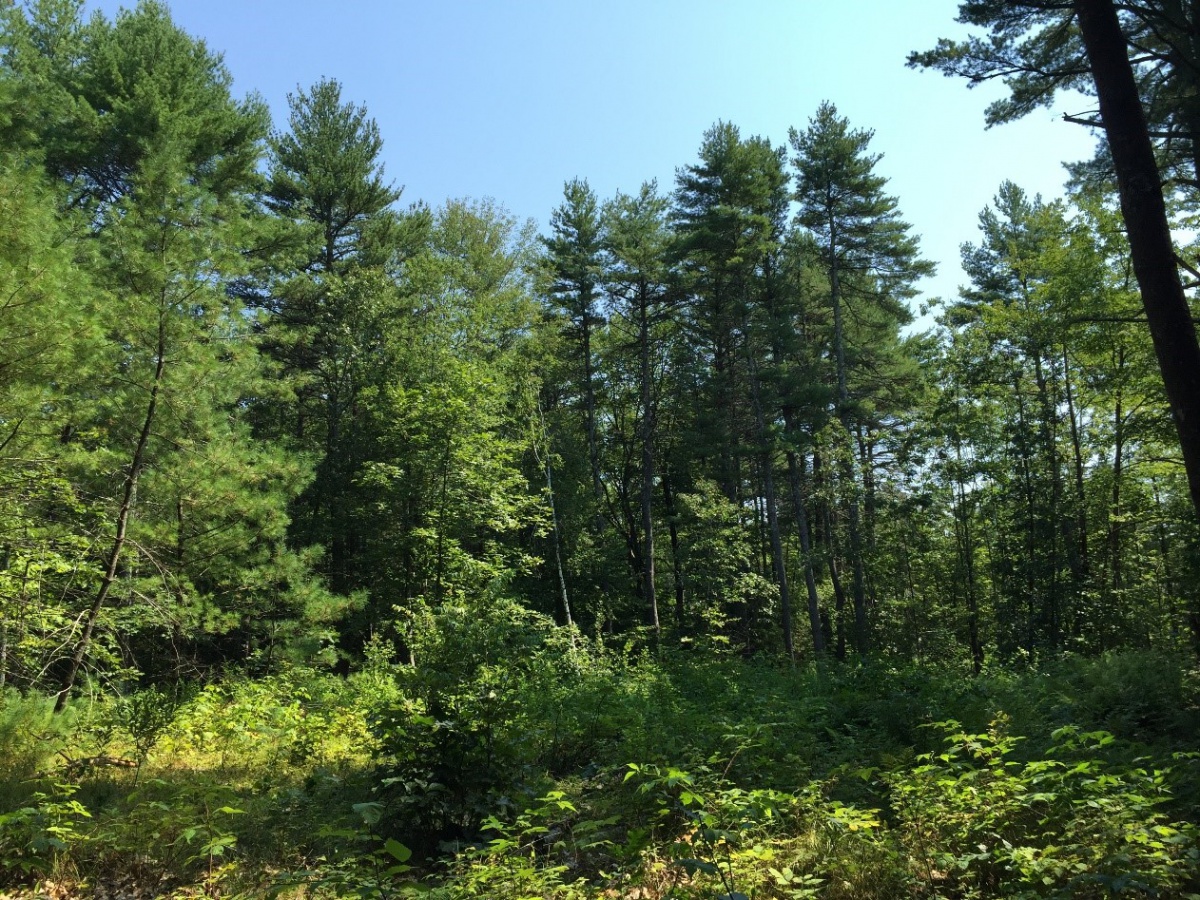 Figure 2. This gap, created in the first stage of an expanding gap shelterwood, maintains enough shade to suppress fast-growing intolerant species like aspen and pin cherry.

There are two major ecological benefits of using expanding gap shelterwoods, both resulting from the inherently diverse canopy structure (Raymond et al. 2009). Group shelterwoods result in a diverse canopy with some open gap areas and some intact matrix forest. Having these opposing structures in close proximity to one another can be beneficial to wildlife that might require open areas for foraging and mature forest for nesting or hibernation. Charismatic species like whippoorwills and woodcocks are often associated with these sorts of mixed habitats. This increase in structural diversity should also increase a stand’s resilience to disturbance. Overly simple stands dominated by one species or age-class can be more susceptible to insect pests, destructive pathogens, climate change, or other disturbances. Overall, stands with diverse structure tend to be more stable and provide a wider array of services. 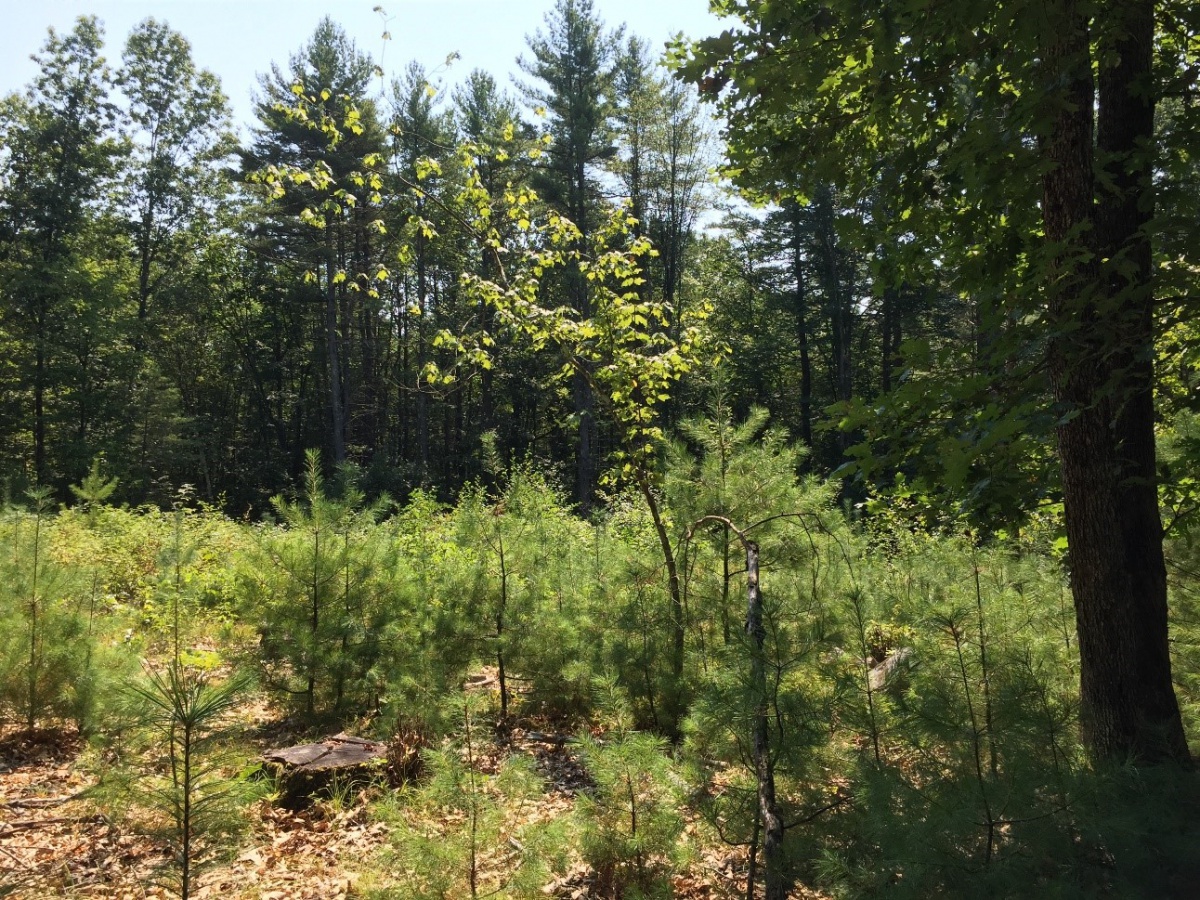 Figure 3. The edge of this gap creates partially shaded conditions ideal for white pine seedling establishment. Other mid-tolerant species favored by this light environment include white and red oak, and yellow birch.

There are also a number of practical benefits of expanding gap shelterwoods, which include, first and foremost, a reduction in planning time for forest managers. Rather than marking individual trees, like in an area-wide uniform shelterwood, this method allows foresters to just mark harvest boundaries. Having removals clumped in groups also reduces operator time, making the harvest more profitable overall. There are also direct benefits for the landowners. Similar to group or single-tree selection systems, this system provides multiple income flows throughout the lifetime of a landowner. However, relative to single-tree selection, the larger gaps increase the likelihood of maintaining commercially valuable mid-tolerants (Raymond et al. 2009; Webster and Lorimer 2002). Perhaps most important to many small landowners, the retention of intact forest decreases the negative public perception associated with some even-aged techniques such as clearcutting. This allows landowners the benefit of timber income without forcing them give up the benefits of hiking, hunting, or otherwise enjoying their woods.

Expanding gap shelterwoods are designed as an efficient and flexible way to regenerate mid-tolerant trees. Group shelterwoods can be used on a variety of different property sizes, and scale well to properties as small as 10 to 15 acres. Because of its diverse array of benefits, and its ability to reduce planning time and expense, this system may be of great use to foresters in New Hampshire and the northeast.