A field note is a report from "the field," based on observation and experience. With partial financial support from the Natural Resources Conservation Service (NRCS) Conservation Innovation Grant (CIG), we set out to answer the question, “Does opening-size matter when it comes to keeping non-native invasives out of a regenerating forest?” We visited openings over two field seasons, counting regeneration stems. This field note highlights some of what we learned.

The take home lesson for foresters and landowners

Before planning a timber sale, look at this NRCS invasive risk ranking map. It is a good predictor of where non-native invasives will regenerate no matter what your opening-size is. Click on the image for a larger view. 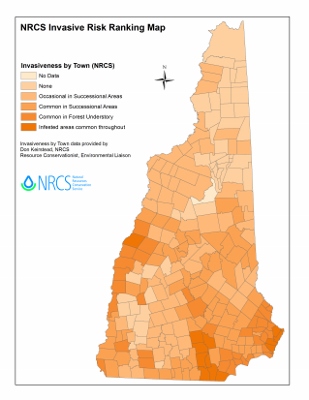 Group openings are a proven technique to regenerate a mix of valuable timber tree species and develop habitat for early successional wildlife. The most common silvicultural techniques used in New Hampshire to achieve these objectives are group selection and small patch clearcuts. One potential negative side-effect of using any silvicultural method is regenerating non-target plant species.

Our observations suggest that forest openings less than ¼ to ½ acre can increase the prevalence and dominance of non-native, invasive plants. Openings of this size and smaller appear to provide enough sunlight to support the germination and growth of invasive shrubs (especially buckthorn, honeysuckle, Japanese barberry), but not enough sunlight to support germination and growth of native understory shrubs and valuable timber tree species that could compete effectively with invasive plants.

Due mainly to the aesthetic and perceived environmental concerns associated with large openings, single tree and small group selection have become the most common approach for managing timber and wildlife resources. Regeneration of native trees and shrubs following this type of harvesting is often inhibited by aggressive competition by invasive plants, which if left untreated, often come to dominate the forest understory. This is further complicated where deer in high densities selectively browse native plants, which favors non-native, invasive shrubs and may help secure their dominance within a stand.

Once the understory of a woodlot becomes dominated by invasive shrubs it can be difficult and expensive to control these plants enough to allow native plants to grow. In woodlots where invasive plants are dominant in the understory, but small and scattered, leaving these stands unharvested (i.e., doing nothing) may simply allow the invasive plants to further secure their dominance to the point that when the overstory is finally removed, there is little growing room for native plants.

In contrast, our observations are that regeneration in large group openings is often composed of a large proportion of native trees. While these larger openings won’t eliminate the invasive plants from a site, they appear to encourage a more favorable proportion of native plants which can then provide competition to invasives and make subsequent invasive control efforts more effective or even unnecessary.

Though we didn’t show that we can minimize the invasion of non-native plants into regenerating forests by changing the size of the harvest opening, we did learn that the NH NRCS Town Risk Ranking Map is a good predictor of the risk of invasion. It is a useful planning and outreach tool.

The second edition of Good Forestry in the Granite State: Recommended Voluntary Forest Management Practices for New Hampshire published in 2011 added a chapter on “temporary openings created with forest management” and expanded information presented about techniques to use to regenerate a forest and manage for wildlife. However, this latest edition of Good Forestry is largely silent about using silviculture (in particular opening-size) to prevent or minimize the regeneration of non-native invasives because we don’t know to what extent opening-size can be used to encourage native plants over invasives. If larger openings can be used to encourage a dominance of native plant regeneration, how large must openings be to encourage at least an equal proportion of native to non-native, invasive plants? Are these openings sizes the same when dealing with all invasive plant species (e.g., buckthorn vs. barberry) and in all growing conditions (wet sites, enriched sites, dry sites) and what impact does herbivory have?

These were some of the questions we hoped to answer with this project. As you will see, we were unable to statistically verify the extent to which opening-size impacts non-native regeneration and also the extent that some of the other identified factors influence non-native regeneration. We did come away with at least one statistically reliable conclusion and also with some useful impressions—all of which are captured in this forestry field note.

We sampled in the summer, spring and fall 2012 and 2013 in Grafton, Sullivan, Cheshire and Merrimack counties, endeavoring to sample in the Quabbin to Cardigan region—a part of New Hampshire that is more rural and somewhat less developed than other parts of the state. Some samples may have landed outside of this region. See figure 1 for sample site locations.

For a detailed description of our field methods, refer to Instructions 2012 CIG Grant Vegetation Sampling Methods (7/17/12).

Landscape setting can’t be over-emphasized. If this project was done in a different part of the state, the results would have been much different. 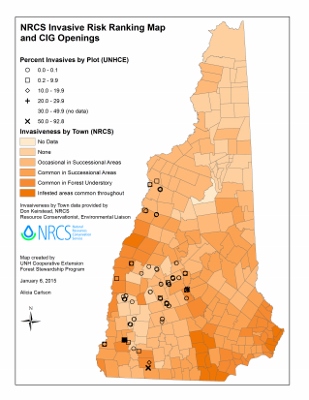 Figure 1. NRCS risk ranking map by towns overlain with percent invasiveness by plot
Click on the map for a larger image.

We looked at the influence of the following on the presence and abundance of invasives:

For the cut/uncut vs. abundance of invasives issue, it may simply be that the model is too complex with all of the variables included. As with presence/absence, it isn't an important variable. Whatever NRCS has in their model, seems to be working!

We found invasives on 18 percent of the cut plots and on only 7% of the uncut plots. While these numbers look as if there is a relationship between the presence of non-natives and cut stands versus uncut stands—after all, cut stands were roughly 4 times more likely to have invasives than uncut stands—the statistical analysis didn’t support this conclusion. See Dr. Ducey’s speculation as to why we can’t be conclusive. Something or some multiple things likely contributed to the finding of so many more non-native invasives in cut versus uncut stands.

Though the incidence of invasives were low on most plots, we did have at least one cut plot where 98% of the stems were invasive and one uncut plot where 40% were invasive (table 1). Table 1 also helps illustrate why we may not have found clear and convincing evidence that opening-size matters—the majority of our openings were small, a function of the size openings being installed in the Quabbin to Cardigan study region of New Hampshire.

My impression was that the abundance (or at least the presence) of invasive species may have been more a function of seed source than soil type, aspect, etc. If this is right, there should be some “randomness” in the results.

If there’s a correlation with any variable, based on what I saw, I would guess that larger openings have more invasives.

Results and conclusions about presence and abundance of invasives

Though it is disappointing we didn’t find a clear relation between cut versus uncut, opening-size, and soils with invasion by non-natives, we did clearly establish that the NRCS risk map is valid to use for outreach and planning. We encourage foresters to use it as a planning tool.

Our anecdotal observations include that the level of invasion in the surrounding forest may have as much influence on invasion into openings as does opening-size, soils and any other number of factors. The good news is that we found low levels of invasion in much of the Quabbin to Cardigan study area and landowners have an opportunity to minimize the introduction of invasives into their regenerating woodlots. (See Good Forestry in the Granite State for some suggestions).

Based on what I saw I would conclude that patch cuts are probably one of the best methods for regenerating a higher diversity of trees and shrubs on the landscape. While this doesn’t control the problem, it does give higher diversity. We are probably never going to get rid of or control invasive species all together so I think that learning to live with them as part of a mix on every landscape is probably our best hope and some form of patch cutting at least offers landowners a non-chemical way to achieve this.

Most partial light harvest methods seem to allow invasive species without a good diversity of native plants to compete with them.