A Walk in the Woods with a Forest Optimist

One aspect of my work as the Grafton County Forester is meeting with people to review their forests. Grafton County, the second largest county in the state, has many different soils, terrains, and forest types, which provide a wide variety of forest conditions. The northern end of the county has more in common with Coos County and the North Country, with a colder climate, spruce-fir forests, and northern hardwoods. The western edge of the county, bordering on the Connecticut River, has a milder climate, mild terrain, and deep rich soils, and a concentration of dairy farms. This area has some unique tree species as well, such as white oak and hackberry. To the east is the rugged terrain and high elevations of the White Mountains, and to the south is rolling hills with oak-pine-hemlock forests growing on long-abandoned farm land.

Along with a diversity of terrain, soils, and tree species, there are different tree ages and forest conditions. While many of the county’s forests (and New England’s forests in general) are middle-aged and densely stocked, some woods have been recently clearcut. These aren’t the only scenarios, though. There is a range of conditions in between, including well-managed woods that have lots of high-quality trees and various age classes, to high-graded woods where the most commercially valuable trees have been cut and low quality, poor vigor trees are left to grow.

Sometimes I get calls from landowners who, for one reason or another, feel that their woodlot is in terrible shape. They might think it’s a “mess”, or there will be no mature trees for a long time, or the species mix is wrong, or there are too many blowdowns and branches. Sometimes these assessments are correct, but I like to think of myself as a forest optimist. No matter the forest, no matter the condition a particular woodlot is in, there are benefits in the existing conditions and opportunities for the future. Trained to think in decades or longer, foresters picture what the forest can become, not simply what it is at the time. 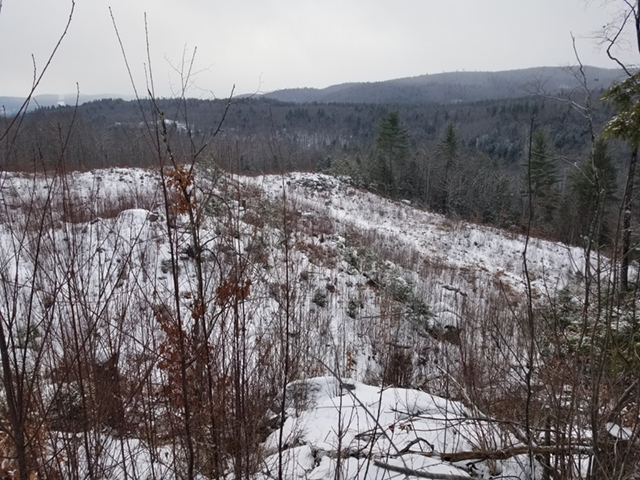 A while back, I met with a landowner who had recently purchased a 100 acre clearcut. It had been cleared of trees about three years prior to our visit, and the crew had done quite a thorough job. Almost no trees greater than sapling size were to be seen, except for a section of mature forest on a steep slope near the road. To many, this large clearcut would be viewed as a wasteland. And while it’s true that it would need decades to grow any merchantable size trees, there are many benefits provided by the current forest, and opportunities available in the future.

The clearcut was regenerating lots of pin cherry, which is a short-lived, shade intolerant species whose seed stays viable in the soil for up to 100 years. When a fire or clearcut removes a mature stand, pin cherry can rapidly colonize the site. Pin cherry belongs to a group of species known as pioneer species. Others include aspen and white birch, which were also growing on this site. They are characterized by shade intolerance and short life spans. Their strategy is to gain dominance over the disturbed site’s light, space, and nutrients through aggressive establishment and rapid height growth. All of this takes its toll, and the trees die at a relatively young age. (Pin cherry’s life span is only 20 – 40 years.)

The current condition of this particular woodlot, though seemingly bleak, was actually providing a number of benefits. The regenerating forest was providing valuable young forest habitat within a landscape of mostly older forest. Young forests, with their dense thickets of saplings, flowering plants, and fruit-bearing shrubs, provide important food and cover for a long list of species. These include ruffed grouse, woodcock, and chestnut-sided warblers, to name a few. Due to past land use patterns, young forest is in short supply in New England. Many species on the state’s Species of Greatest Conservation Need require young forest for all or part of their life cycle.

Over time, shade tolerant tree species will become established under the canopy of pioneer trees. Already growing in the shade of the pin cherry, hemlock saplings were likely present in the understory of the previous stand. On the opposite end of the shade tolerance spectrum of pin cherry, hemlock can persist for many decades in deep shade. The foliage of pioneer species is relatively sparse, allowing some light to filter through. Trees that are partially tolerant of shade, such as yellow birch, red oak, and white pine, become established under a canopy of pioneer species, in addition to the shade tolerant trees.

As I explained all this to the landowner, he felt much better about the cutover forest he had bought.

Another landowner I met with was very concerned about the numerous old blowdowns and downed logs in her forest, which had been logged twenty years prior. When I visited the property, I found the woods in good shape, with trees ranging from sapling size to sawtimber size, and even a few large, old trees that were probably growing by themselves when the land was pasture. There were indeed numerous old blown down trees and sections of downed trees that weren’t taken by loggers the last time around. The landowner found this downed wood to be very unsightly and thought it should be removed. Cleaning up downed wood may improve things visually for some, but removing it takes time and money. On the other hand, there are plenty of benefits to leaving this material. Dead wood is essential to the ecology of the forest. It is part of the nutrient cycling process, and provides habitat for insects, fungi, amphibians, reptiles, small mammals, and birds. Weasels hunt for snakes and mice under and around dead wood and bears tear apart old logs and stumps, looking for grubs and ants. When the landowner learned about these benefits, she felt much better about what she had in her woods, and felt less inclined to “clean it up”.

On another woodlot, a dense thicket of young pines appeared to be of little use, but there were in fact a lot of future sawtimber trees hiding in there. With some work to release and prune them, they will grow rapidly into valuable trees. These sawtimber trees can eventually be harvested to pay the taxes, for improvements to the land, or for a family member’s education.

All of this isn’t to say that every woodlot is just as good as the next. Some woodlots have in fact been impaired in their productivity and their ability to meet certain goals. When managing any woodlot, the most important consideration is to protect the water quality and to prevent unnecessary damage to the soil. If these two qualities are protected, then the land will be capable of providing a wide array of benefits, in the present and future. Also important is matching landowner goals with the resources on the property. If the goal is to grow harvestable timber in the next few decades, then a well-stocked stand of small to medium sized, commercially valuable trees is more capable of meeting that goal than a recent clearcut regenerating to pin cherry. Alternatively, the regenerating clearcut can more readily meet wildlife habitat goals than a stand of poletimber that has little structure for wildlife and needs to be thinned.

Forests come in different sizes, types, and conditions, and all are capable of providing a wide range of benefits. As long as they remain forested, and not converted to other uses, they will continue to provide wildlife habitat and clean water, hold soil in place, store carbon, and provide wood.

If you need some help understanding your land’s resources and seeing the possibilities, contact your county forester. We can help you see the benefits the woods are currently providing, what the land is capable of, and the potential for the future.