An Unusual and Sometimes Unsung Conifer of the North
SHARE

Tamarack, hackmatack, eastern larch – these are all words for the same tree, scientific name Larix laricina. Also called juniper in parts of Maine, the multiple common names are a good reminder of why we have scientific names – to provide a universal name for a species.

While the Latin Larix means larch, and laricina means colors, none of the many common names seems to capture one of the most interesting aspects of the species – it is a conifer that loses all its needles every fall, after turning a yellow-gold color. The well-known ecologist, forester, and author, Aldo Leopold, described the color of tamarack in the fall as “smoky gold”. The soft, short needles themselves have a unique look, found in clusters arranged along the tree’s branches. The bark of the tree is platy, with a look of corn flakes, and at a quick glance can sometimes be mistaken for that of spruce.

Among all the North American conifers, tamarack has one of the largest ranges, but is mostly found in the northern half of the continent. Its southernmost location is the mountains of West Virginia, but it is more commonly found in the Lake States east to New England, then through Canada all the way to the northern edge of where trees can grow, and up into parts of Alaska.

As one can guess based on its large range, larch is tolerant of a wide range of soil and temperature conditions. It competes best on moist or wet organic soils, which is why it is often associated with peatlands and bogs. It can also tolerate very acidic conditions, as well as some extremely cold temperatures –surviving at minus 85 degrees Fahrenheit!

If one wants to establish a stand of tamarack, abundant light is required. Tamarack is very intolerant of shade, and is referred to by foresters as a pioneer species. In other words, it is one of the first species to occupy a disturbed site, establishing readily on burns, clearcuts, and abandoned agricultural land, especially those with poorly drained soils. It is commonly seen growing on roadsides, old log landings, field edges, and other places where a significant disturbance created an opening and exposed mineral soil. Tamarack seeds germinate well on mineral soil and on moss, which is why they can become established in peatlands.

Due to tamarack’s affinity for wet sites and its intolerance of shade, it is typically found in association with other species that share similar ecological characteristics. Some common associates in wet organic soils are black spruce and northern white cedar. On sites with slightly better drainage, balsam fir and white spruce are found growing with tamarack. The species is also found in association with quaking aspen, grey birch, and white birch on old field sites, along with alder, willow, and red-osier dogwood in areas of old poorly drained pasture or field. 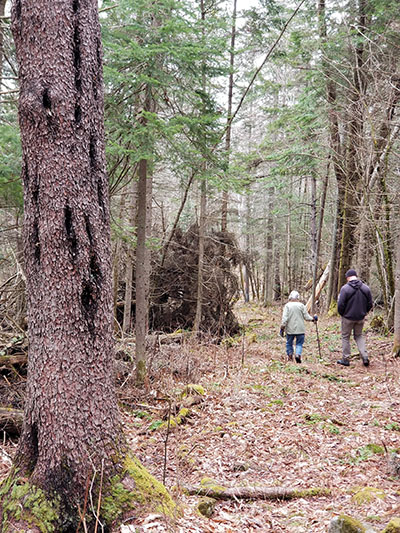 Tamarack is an Algonquin word for “wood used for snowshoes”. The wood is flexible yet tough, and lent itself well to this use in northern regions where ash, another wood commonly used for snowshoe making, wasn’t readily available. Native people also used the fine roots of tamarack to sew birch bark. Other uses of tamarack by natives included dogsled runners, boat ribs, and fish traps.

When Europeans arrived on the continent, they found another use for the roots of tamarack, or more accurately the lower trunk of a mature tree combined with the surface root. Tamarack tend to be shallow rooted, given their propensity for wet soils, and this forms sharp angles between the trunk and the surface root. This habit, combined with the rot resistance of tamarack, created wood suitable for ship “knees”. Knees were used for many applications in ship and boat building where strong but sharply angled pieces of wood were called for. The most notable use was in keels. Tamarack knees are still sometimes used today, and in addition to boats, can also be used in timber framed houses, barns, and wooden bridges. Tamarack lumber is not in high demand, but it is useful in applications where rot-resistance is required, such as decking, rails, and posts. In years past, surveyors often used tamarack for property corner posts due to its longevity.

Like most tree species, tamarack is not without its pests. Most are not particularly harmful, but the larch sawfly is one that defoliates tamarack, and if an infestation persists for multiple years, can lead to slow growth rates and ultimately death. Four to six years of defoliation can slow growth, while six to nine years of repeated defoliation can lead to tree death. The larch sawfly is a European native, and has been present in North America since the late 1800s. Several parasitic wasps have been introduced over the years, leading to relatively effective control.

Aldo Leopold writes fondly of the tamarack in his essay “Smoky Gold” in A Sand County Almanac. He describes hunting ruffed grouse in the tamaracks in the fall, and after taking a break for lunch, he “regard(s) a phalanx of young tamaracks, their golden lances thrusting skyward. Under each the needles of yesterday fall to earth building a blanket of smoky gold; at the tip of each the bud of tomorrow, preformed, poised, awaits another spring”.  A wonderful description of the tree itself and the cycle of nature, and an homage to a sometimes underappreciated tree.