Squirrels may play a key role in re-growing (regenerating) oak stands by burying acorns, often under stands of white pine. They also bury pine cones under oak trees. As a result, it is common to find oak in the understory of white pines, and white pine regenerating under oak. 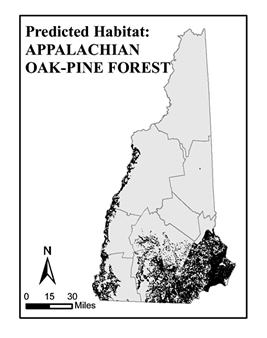 Where are Appalachian Oak-Pine Forests?

Appalachian oak-pine forests cover less than 10% of the state, mostly in the southeastern portions, especially Rockingham County, where the largest blocks of this habitat are found. A narrow band also follows the Connecticut Rivernorth from Cheshire into Sullivan and Grafton Counties. Examples of high-quality Appalachian oak-pine forests are in Pawtuckaway State Park in Nottingham, around Great Bay in Durham (Crommet Creek), and at Beaver Brook Association lands in Hollis.

Why are These Forests so Important?

Appalachian oak-pine forests, with their abundance of nut-bearing oaks and hickories, provide a rich food source for wildlife such as ruffed grouse, turkey, black bear, squirrels, mice and chipmunks. In turn, raptors such as northern goshawk feed on small mammals and find nesting and perching sites in white pines in the tree canopy. Near water, white pines provide key nest and perch sites for bald eagles, great blue herons, and osprey. 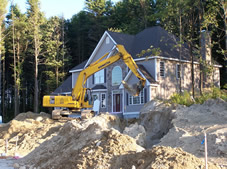 Habitat Lost to Development
Most Appalachian oak-pine forests are in southeastern New Hampshire, coinciding with the highest densities of people. The dry soils in these forests are easily developed for homes, buildings, and septic systems. Much of New Hampshire’s historical Appalachian oak-pine forest is already permanently lost to human development. Large, intact blocks of this forest type are relatively rare, and only 12% of existing forests are permanently conserved. 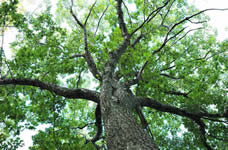 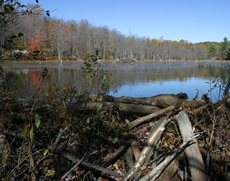 Fewer Beaver Dams, Less Diversity
Prior to human settlement, large complexes of beaver wetlands occurred on the landscape in varying stages of abandonment – from newly flooded sites, to ponds, open meadows and forests. Beaver activity contributed to the patchwork of different tree sizes, types, and ages in pre-settlement Appalachian oak-pine forests. The flat landscape in southern New Hampshire meant that beaver flooding covered more of the landscape than in other hillier parts of the state. Over time, human development encroached on beaver habitats, reducing the ability of beavers to influence the forested landscape, making our forests more uniform and less diverse. 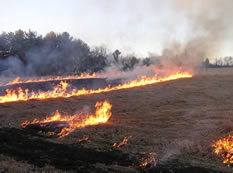 Less Fire, Less Diversity
Historically, the dry soils and warm temperatures in southern New Hampshire allowed occasional low intensity fires to burn in the forest. These fires were caused by both lightning and burning by Native Americans. Oak trees are relatively resistant to fire and are able to sprout from stumps after a burn, so fire helped maintain a large component of oak in the forest. Without fire, today’s forests likely have a higher proportion of white pine, hemlock, sugar maple and birch, trees less tolerant of fire which don’t provide as rich a supply of nuts for wildlife. Today’s mature Appalachian oak-pine forests may also be denser, as historical low ground fires would have created a more open understory in the forest, important for such species as whip-poor-wills and northern goshawks.

Click here for the Appalachian Oak-Pine Climate Assessment, a section of the Ecosystems and Wildlife Climate Change Adaptation Plan (2013), an Amendment to the NH Wildlife Action Plan

A great many wildlife species use Appalachian oak-pine forests, including those listed below. Be on the lookout for these species, and follow stewardship guidelines to help maintain and enhance these forests. Species of conservation concern, those wildlife species identified in the Wildlife Action Plan as having the greatest need of conservation, appear in bold typeface and link to their wildlife profile from the Plan.

Other Resources for Appalachian Oak-Pine Forests