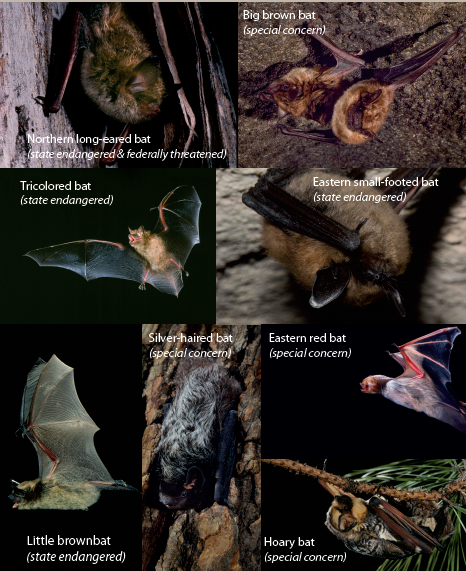 Bats are the only mammals that truly fly. They are generally nocturnal, sleeping during the day and beginning to fly at dusk to forage for insects. Bats are long-lived for their size, with some bats living over 20 years in the wild. New Hampshire is home to eight species of bats.

Bats eat insects - millions of them! This includes a large number of agricultural and forest pests, as well as pesky mosquitoes. Bats can eat 50% of their own body weight every night - more if they are females with pups. 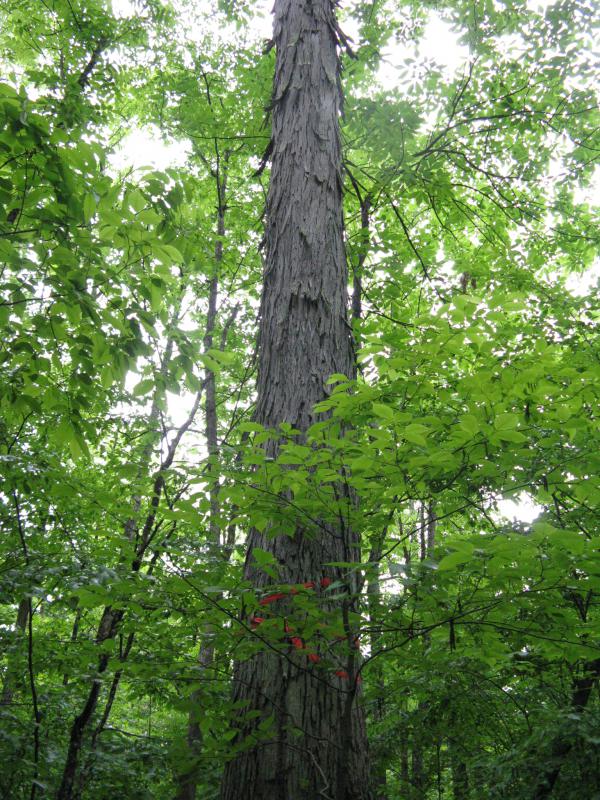 Bats use a variety of habitats throughout the year. During summer evenings, bats forage for insects in the woods, over water (marshes, lakes and ponds), along forest-field edges, or in open areas - depending on the species. Bats roost (rest) during the day. Eastern small-footed bats spend the summer in rock crevices. The remaining species roost in trees, and have different preferences for tree size, state of decay, part of tree used (under bark, in cavities, in clusters of leaves), tree density, and proximity to water. Little brown and big brown bats often utilize buildings – barns, attics and other outbuildings – for their roosts and maternity colonies. 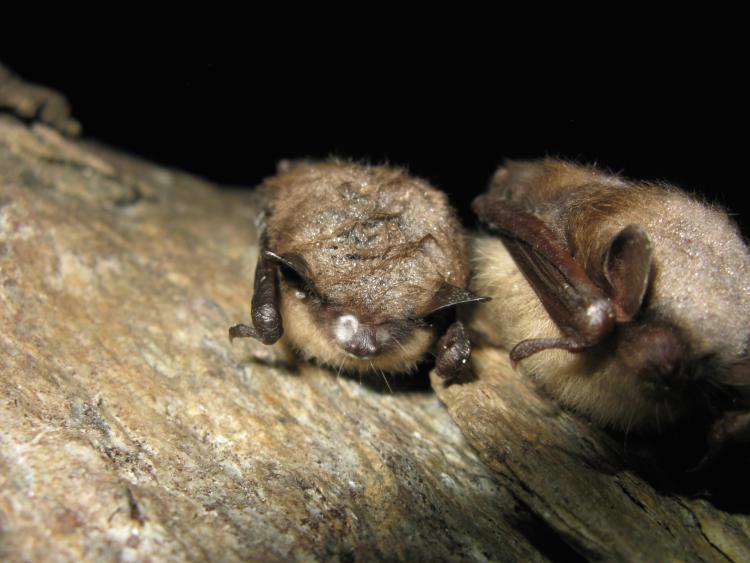 White-Nose Syndrome. First found in New Hampshire in 2009, White-nose Syndrome (WNS) is named for the white fungus, Pseudogymnoascus destructans, that appears on the muzzle and wings of affected bats while they are hibernating in the winter. The fungus causes bats to wake from hibernation more frequently. This burns up their limited energy reserves, leading to possible starvation and death. Cave-hibernating bats in New Hampshire have been decimated by WNS, and winter surveys of bat hibernacula have documented major population declines – nearly 99% for some species.

Loss of habitat. Bats require suitable foraging habitat, roost sites, and hibernacula, which can be impacted by development, loss of forested habitat, and human activity.

Wind turbines. Large numbers of bats can be killed by wind turbines as they move to hibernacula or migrate, or while foraging in habitat near turbines. Bats can die from being hit by blades and also by barotrauma, where the changing air pressure caused by the moving blade causes their blood vessels to rupture.

As a result of these threats, all of New Hampshire’s bat species are listed as Endangered, Threatened, or as a Species of Special Concern. The US Fish and Wildlife Service listed northern long-eared bats as threatened in May 2015.

Let them use your barn. You can help by allowing bats to exist where they have for centuries – in your barn. Big and little brown bats particularly like structures where they can form large maternity colonies in a hot environment that helps the pups grow quickly. If you are having problems with guano, create a ceiling or hang a tarp between the roof and your equipment. 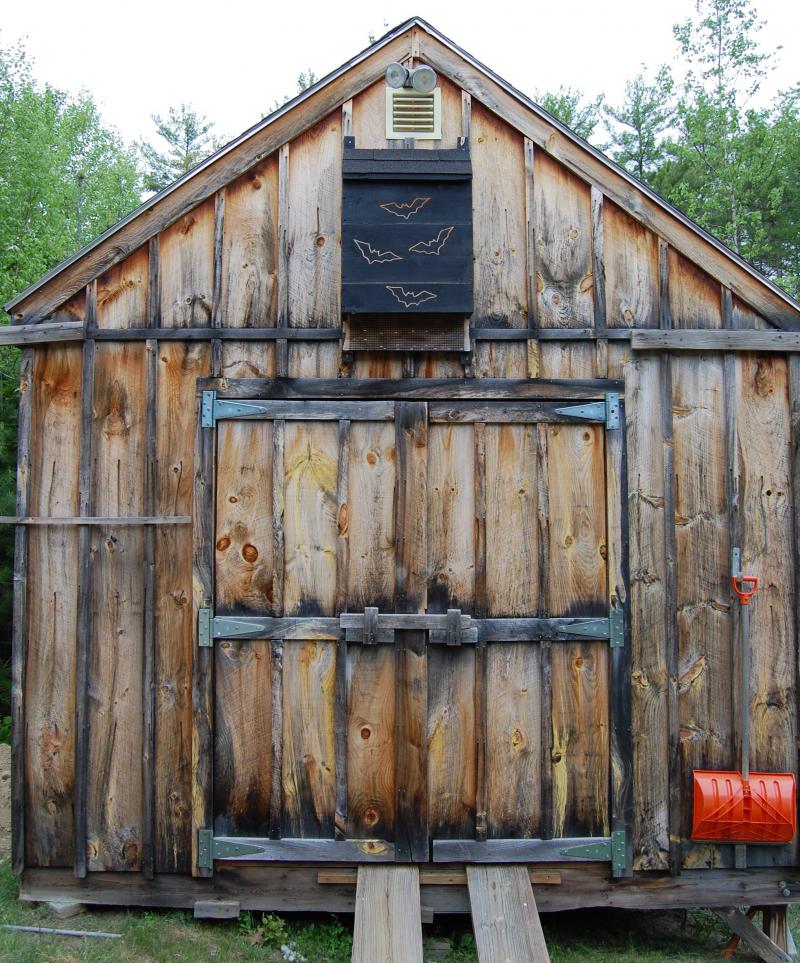 Install a bat house. Because bats typically only have one pup each year, successful maternity colonies are important. Bat houses can be good colony locations if designed correctly and put in the right place – size (large), color (dark), height (>15 feet), and location (facing SE) are all important.

Follow best practices to keep them out. If you want to get rid of bats in your attic, you or a licensed wildlife control operator can create an exclusion. Use a one-way device over holes, so the next time bats fly out they cannot get back in. You can then can seal up the holes, and replace your colony space with a large bat house. Do not exclude bats from mid-May through mid-August when babies cannot fly and will get trapped in the space.

Do not disturb. To reduce the likelihood of harming bats, avoid any disturbance near a known maternity roost tree from mid-May through mid- August, and conduct timber harvests when bats are hibernating (October 31 to April 1). In winter, stay out of caves and mines. Bats are very sensitive to disturbance, and will come out of hibernation when humans enter their space. This uses up critical energy reserves. Staying out will also prevent the spread of WNS.

Maintain or enhance habitat. Bats use forests in spring, summer, and fall. They need a source of water, an area to forage, and large trees/snags for roosting. You can help bats by providing a landscape with these elements. Protect both occupied and potential roost trees, which typically have cavities, crevices, loose/shedding bark, and larger diameters.

Bats In Your House
Bats want to be in a hot, dark, quiet space - not your living room. If they accidentally get into living spaces, open any outside windows and doors to the room where the bat is and leave the room, closing interior doors behind you and turning off the lights. They will soon find their way outdoors. Do not release a bat if it was found in a room with a sleeping person or young child – it should be tested for rabies as a precaution. See Bats & Rabies.

Bats, like other mammals including humans, can be infected with the rabies virus and some of them are. But the large majority of bats are not infected. However, a bat that can be easily approached is likely to be sick. As with any wild animals, avoid contact and there is little chance of being bitten. Do not touch a bat with your bare hands. If you touch a bat, or if a bat is found flying in a room with a young child or sleeping individual you should call your doctor and the NH Department of Health and Human Services, Bureau of Infectious Disease Control at (603) 271-4496 right away. Visit www.dhhs.nh.gov/dphs/cdcs/rabies for more information.

Learn more about bat conservation, including instructions and plans for bat houses at: www.batcon.org

This webpage and accompanying Focus on Wildlife brochure was developed by UNH Cooperative Extension and NH Fish & Game. Written by Haley Andreozzi, Sandra Houghton, and Emily Preston. May 2017.