Blanding’s turtles are distinguished by their bright yellow chin and throat. Their domed shell, looking much like an army-helmet, is often speckled with yellow on a gray to black shell. As hatchlings, they are the size of a half-dollar, but full grown adults can have a shell 12-inches long and weigh several pounds. 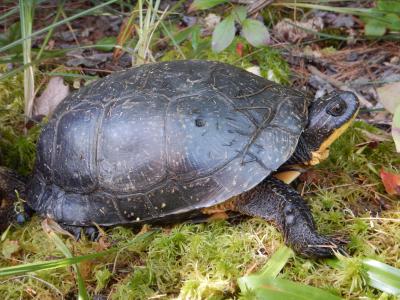 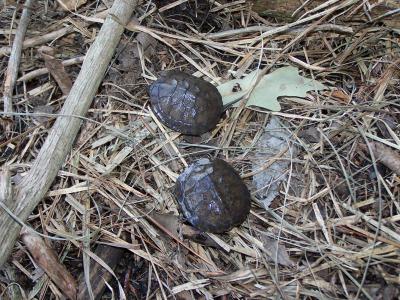 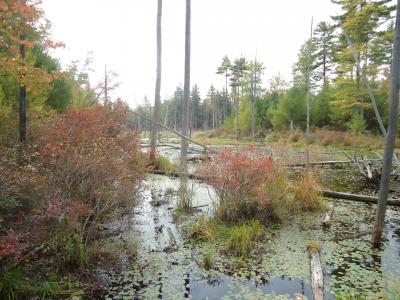 As a semi-aquatic species, Blanding’s turtles spend significant time both in the water and on land. They use numerous types of wetland habitats including marshes, swamps, bogs, beaver ponds and vernal pools. They prefer densely vegetated wetlands, and will use vernal pools extensively while traveling across the landscape. Blanding’s turtles use the uplands that connect these systems for nesting and travel between wetlands.

Landowners often encounter Blanding’s turtles in their yards when females are looking for nesting areas or when turtles are on their way to another wetland. In mid-May to early July, female Blanding’s turtles lay 8 to 10 eggs in sandy, loamy well-drained soils in upland areas exposed to direct sunlight (no tree canopy shading). Nesting sites include disturbed soils, pastures, powerline corridors, roadsides, and yards.

Even landowners far from a wetland might spot Blanding’s turtles − researchers have seen females move almost two miles to find a good nesting spot! The eggs develop under the soil, and by the end of summer, young turtles emerge quickly and quietly to make their way to a nearby wetland. 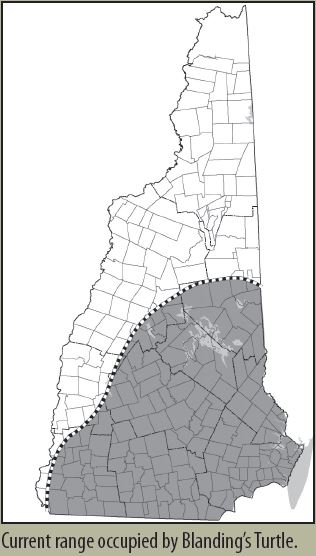 The distribution of Blanding’s turtles in New Hampshire is restricted to the southeast, and they are currently listed as a state-endangered species. Blanding’s turtles are particularly vulnerable to population declines because they travel very long distances, do not reproduce until late in life (14- 20 years), and their young have very low survival rates.

Human Development & Roads. As New Hampshire’s human population grows, the wetland habitats, nesting sites, and corridors that Blanding’s turtles use to move across the landscape are often lost or fragmented by development. Roads are the primary cause of adult mortality in Blanding’s turtles. They travel to multiple wetlands throughout the year and females travel to nesting habitats, crossing roads in the process. Culverts that allow water from wetlands and streams to pass under roads are often undersized, and not suitable for turtles to pass through. This forces turtles to move up the bank and attempt to cross the road which often results in mortality.

Increased Predation. Predators like skunks, foxes, and raccoons are well adapted to human settlement and are generally more abundant in southern New Hampshire towns where Blanding’s turtles occur. As a result, Blanding’s turtles face increased predation on their eggs and young. 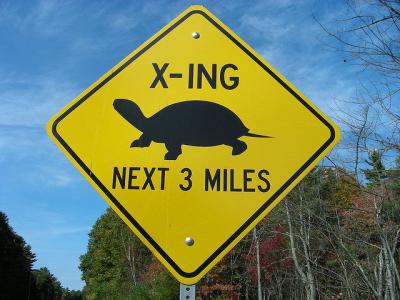 Slow down and watch for turtles in roadways! If you see a turtle crossing a road or parking lot, and it is safe for you to do so, help it safely cross the road in the direction it was traveling. Sometimes people will unknowingly move a turtle to unsuitable habitat, so once out of danger, just let the turtle go on its way. Never create a dangerous situation for other motorists or yourself.

Leave them where they are. Turtles which are not in danger should be left undisturbed. A turtle taken to your home is a turtle lost from the local population, and it is illegal to possess Blanding’s turtles. If a Blanding’s is nesting in your yard, let it be and watch from inside. If a turtle is disturbed during nesting, she will often leave and return to nest later which increases risks associated with traveling overland. When she is done nesting, you can help protect the eggs by keeping pets and people from digging up or disturbing the nest.

Maintain existing habitat. If you have a pond or vernal pool on your property, maintain its natural flow and leave tree canopy, downed logs, and vegetation in place. Wetland drawdowns, including beaver dam removal, should be avoided in winter when turtles are hibernating underwater. Refrain from using fertilizers and pesticides on your property if wetland habitats are nearby. Landowners with large acreage may choose to maintain suitable nesting habitat away from roadways (contact NHFG for advice).

Conserve your land. Minimizing future habitat loss in areas where Blanding’s turtles are known to occur is integral to the conservation of the species. Help conserve important natural areas in your community, or put your land into a conservation easement to help ensure that it will never be developed.

Mulch piles and gardens can be attractive places for turtles to nest when located near wetland areas. Spreading mulch gardens soon after delivery will discourage turtles from nesting in a mulch pile that is likely to be disturbed later in the season. If a mulch pile will be in place for several weeks or more during turtle nesting season (mid-May – early July), cover it with plastic to reduce the attractiveness to nesting turtles.

For more information on Blanding’s turtles, or what to do if you find an injured turtle visit www.wildnh.com/nongame

Reptile and Amphibian Reporting Program. Biologists use your reports of Blanding's turtles to help understand their distribution in the state. Report any reptile or amphibian species to NH Fish & Game in one of three ways: 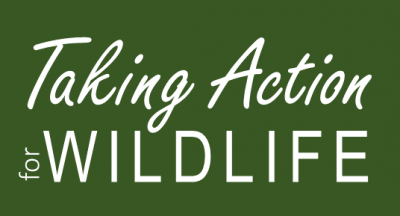 We bring information about NH’s wildlife to you! The Taking Action for Wildlife Team, made up of staff from both NH Fish and Game and UNH Cooperative Extension, works to help towns, land trusts, natural resource professionals, and private landowners conserve wildlife and habitats in New Hampshire. We help put information from NH’s Wildlife Action Plan in the hands of New Hampshire citizens.

For more information about habitat management, resources and publications about other wildlife, and to learn more about the New Hampshire Wildlife Action Plan visit www.takingactionforwildlife.org 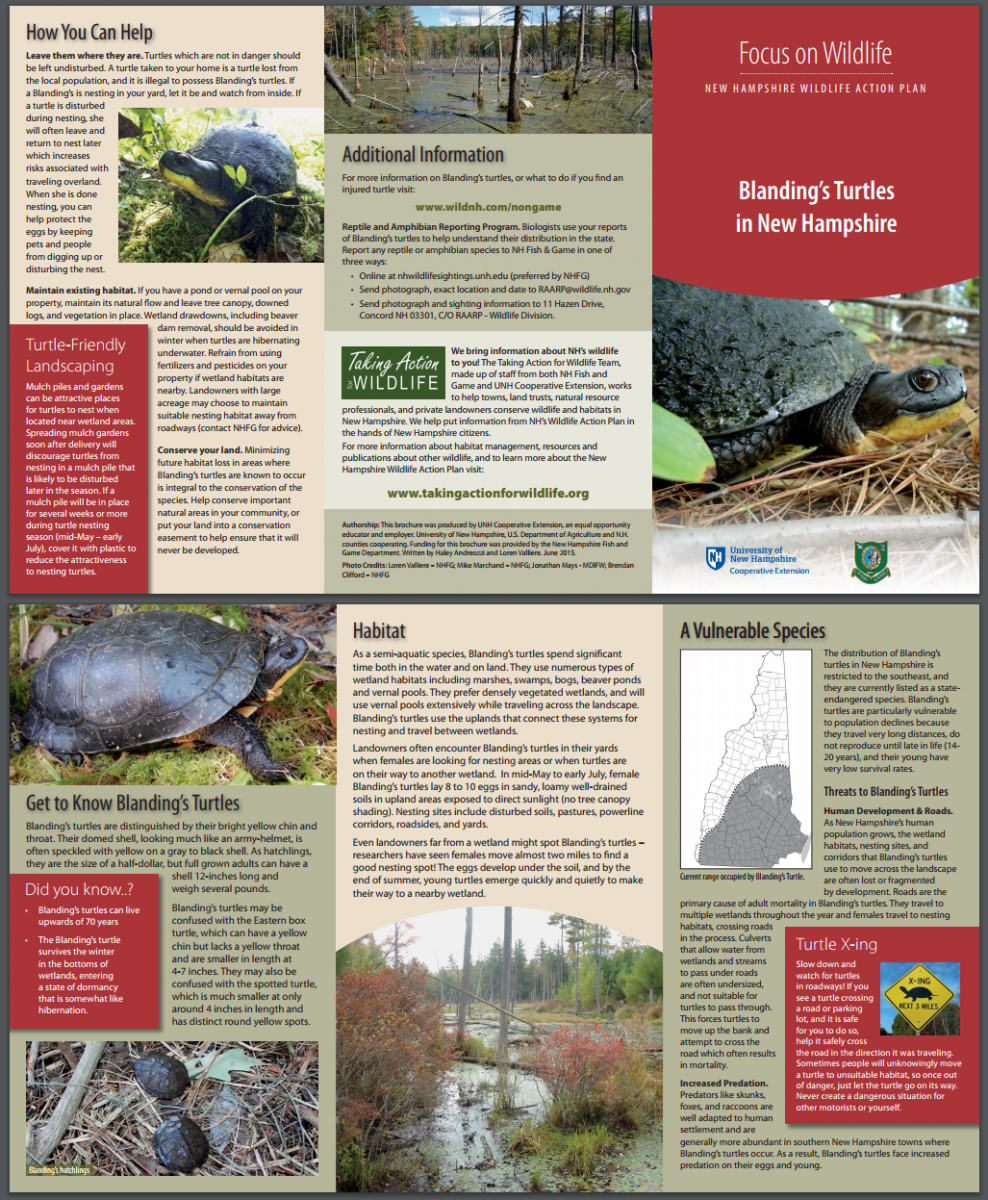