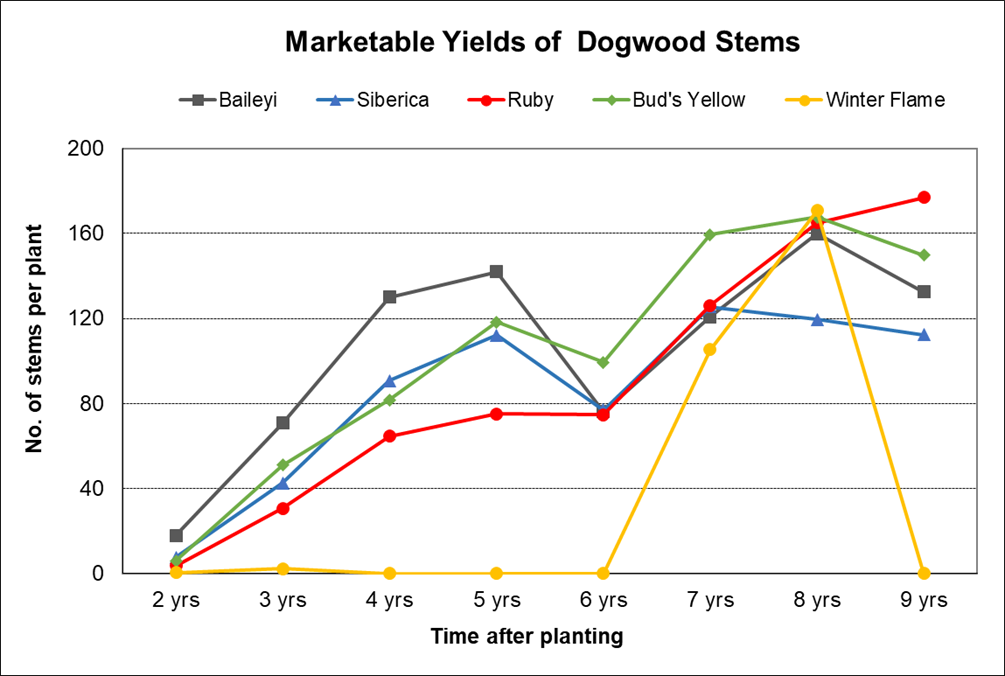 ‘Baileyi’ was consistently the best yielding variety for the first five years, but yields fell off during the last two years. It had the darkest red stem color and the stems were straight and long, with >80% of them over 3 feet in length. ‘Siberica’ looked very similar to ‘Baileyi’ but was lower in yield and slightly shorter in length. ‘Ruby’ was lighter in color, turning orangey as spring approached, and was the lowest yielding red variety for the first six years. Any of these three red-twig varieties are highly marketable and could be planted for cut branch purposes. ‘Bud’s Yellow’ yielded high numbers of long, clean, clear yellow stems. Growers should consider planting a small number of these to compliment the red twigged varieties but be aware that there is not a high market demand for them. Other varieties such as ‘Winter Flame’ can be added for novel stem colors and specialized markets, but, should not be expected to yield high numbers of marketable stems. Greater damage from winter dieback and deer browse was observed on ‘Winter Flame’, which was a slower grower and tended to have lots of horizontal branches.
Other varieties that were not included in the trial but can readily be found in nurseries include ‘Cardinal’, which is red, and ‘Argenteomarginata’ or others with variegated leaves. The variegated types are attractive landscape plants but generally do not have the deep red winter stem color desired for cut branch crops. There are also some compact (dwarf) varieties such as ‘Arctic Fire’ and ‘Artic Sun’ available, but they tend to branch and not produce the straight, long stems desired for florist use. The native red-osier dogwood is available as seedling stock but may not have the vigor and bright stem color desired for a commercial cut-branch crop, so use of improved varieties is recommended.
In related work, 3-year old ‘Baileyi’ plants from 3-gallon nursery containers were planted alongside smaller 2-year old, 2-gallon container stock of the same variety. Six plants of each were planted in the same field at the same time and yield data was kept for five years. The older plants yielded fewer stems than the younger plants each year, so clearly there was no advantage to spending more money on the larger nursery stock.

Like dogwood, winterberry holly (Ilex verticillata) is primarily a late fall holiday item, and it times itself perfectly for this. The berries ripen and the leaves drop in late fall, exposing bright red, orange, or gold berries, depending on the variety. Winterberry has proven to be the most challenging crop in the trial due to a naturally slow growth rate and biennial harvest pattern, so plan for long-term value rather than a quick return on investment. Deer browse was also a problem when plants were young.
All hollies have separate male and female plants, so be sure to plant a compatible male pollinator for each female variety. A ratio of one male per ten female plants should be sufficient. The most common male varieties are ‘Southern Gentleman’ and ‘Jim Dandy’. Pair males and females that flower at the same time; nursery catalogs will tell you which male is recommended for which female.
The cultivated varieties produce much higher quality stems than wild-harvested winterberry so should be sold at a premium price. The cut stems are mostly 12-24” in length and because they are often branched, it’s hard to bundle them. Selling them in trays or loose bunches by weight is preferable to grading and selling by stem count.
Berries form on two-year old wood (twigs that grew the previous year); in other words, it takes two years to produce a berry-yielding stem. They cannot be cut as aggressively as dogwoods, and good plant structure must be preserved when harvesting. The easiest harvest strategy for this crop is to plan a rotation so that each plant is harvested only every-other-year. Harvest the best long, strong stems that are vertically oriented and originate near the center of the plant. Cutting stems of at least half-inch diameter will encourage development of strong new stems that will support heavy berry loads in the next cycle.
An alternative harvest strategy is to cut a small number of stems from each plant every year. This strategy requires planning ahead and selectively harvesting a limited number of berry-bearing stems while preserving good plant structure. After harvest, identify the strongest young stems to leave for next year’s bearing stems, and prune off weaker stems and branches that will compete or interfere. Leave uprightgrowing stems of at least a half-inch diameter that originate near the center or base of the plant.
Five varieties selected for dense berry set, excellent color, and long berry retention were compared in a trial planted in 2002-03. Each variety had its advantages and disadvantages. Average yields per plant per year are shown in Figure 2.
‘Winter Red’ had such heavy, dense berry set that the branches bowed from the weight. The bright red, shiny berries held well after harvest, but late retention of brown leaves on the plants was a problem in some years. ‘Berry Heavy’ produced the highest yields, and was earlier to drop its leaves, but the berries had an orange cast to them. Of the two Dutch varieties, ‘Oosterwijk’ was not impressive in the first three years but the mature plants produced good yields and high-quality stems. ‘Cacapon’ was highly variable from year to year but had the straightest stems and best uniformity of product.
‘Sparkleberry’, a hybrid between two holly species, produced the tallest plants and therefore the longest stems. The berries were very small and delicate with a white waxy layer that gave them a unique sparkle, but the berries were loosely attached and dropped easily during handling. ‘Sparkleberry’ plants were the first to drop their leaves, allowing for an early harvest, which is essential for this variety because berries may turn black if exposed to a hard freeze.
Figure 2. Average yields for winterberry varieties in UNH trial. Each bar is the average yield from six harvest years
between 2006 and 2017, except Winter Red (4 harvest years). 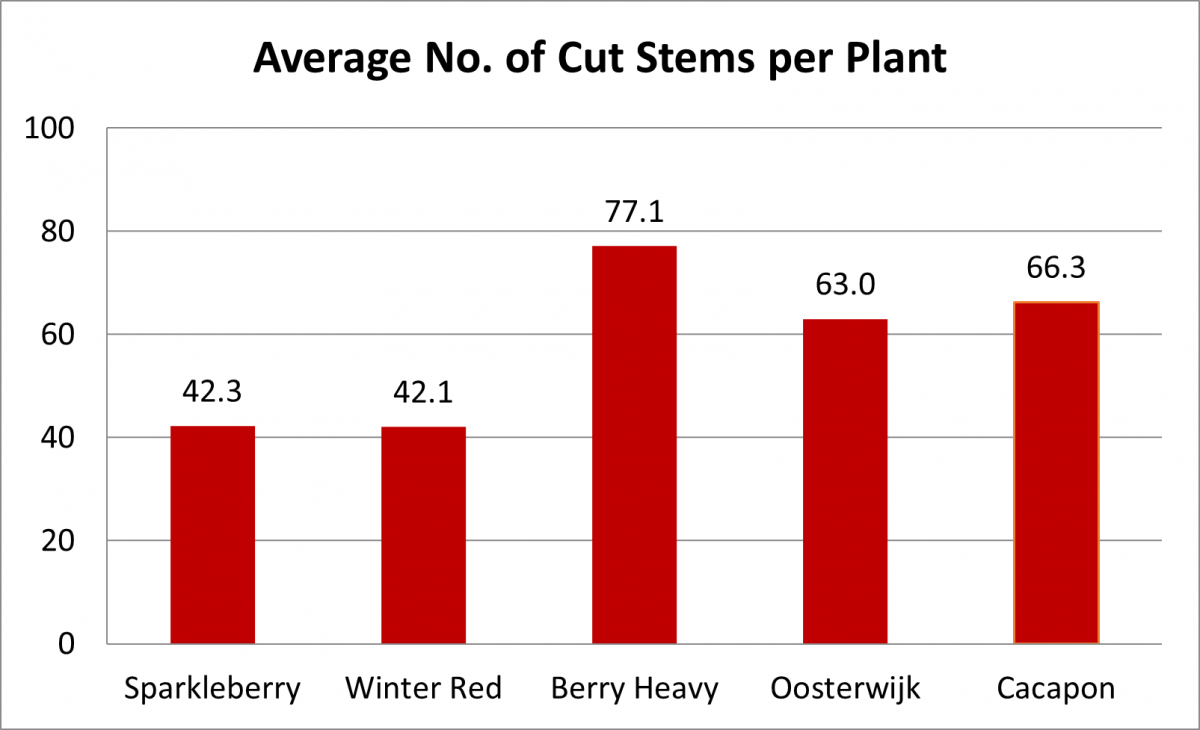 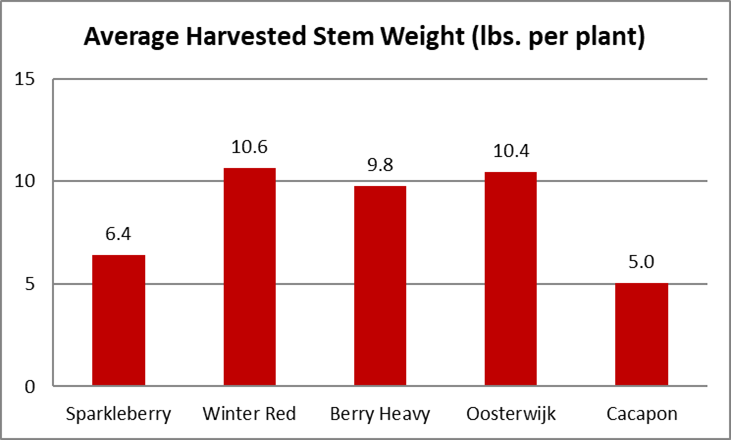 Pussy Willows
In my opinion, the best cut branch crop to start with is pussy willow. People are desperate for spring at the time the fuzzy catkins appear in early to late March. Demand is high for good quality cultivated pussy willow stems, which are far superior to wild-collected stems. Wholesale buyers want bunches of 3 to 4-foot long stems with good catkin density.

Much of what is currently marketed in the spring is collected from natural stands of the native pussy willow, Salix discolor. They often have weak stems with very few catkins on them. Plant giant pussy willow (S. chaenomeloides) and/or French pussy willow (S. caprea) for your cultivated crops.

The latter is a consistent producer with straight branches and normal size catkins with a rose tinge; the giant pussy willow has plump, gray, fuzzy catkins an inch long or more. Both make excellent quality cutstems and are highly marketable to local florists or direct to consumers.
In our trial, yields for the first four harvest years averaged 68 marketable stems per plant per year (Figure 4). The next two years yielded few marketable stems, due to heavy deer browse in one year and abortion of catkins due to extreme cold in year 7. In the long term, giant pussy willow stems were longer and more numerous than French pussy willow. They also began opening earlier in the year, which may extend the harvesting and marketing season.
Figure 3. Yields of French and giant pussy willows in UNH trial, 2004-2011. 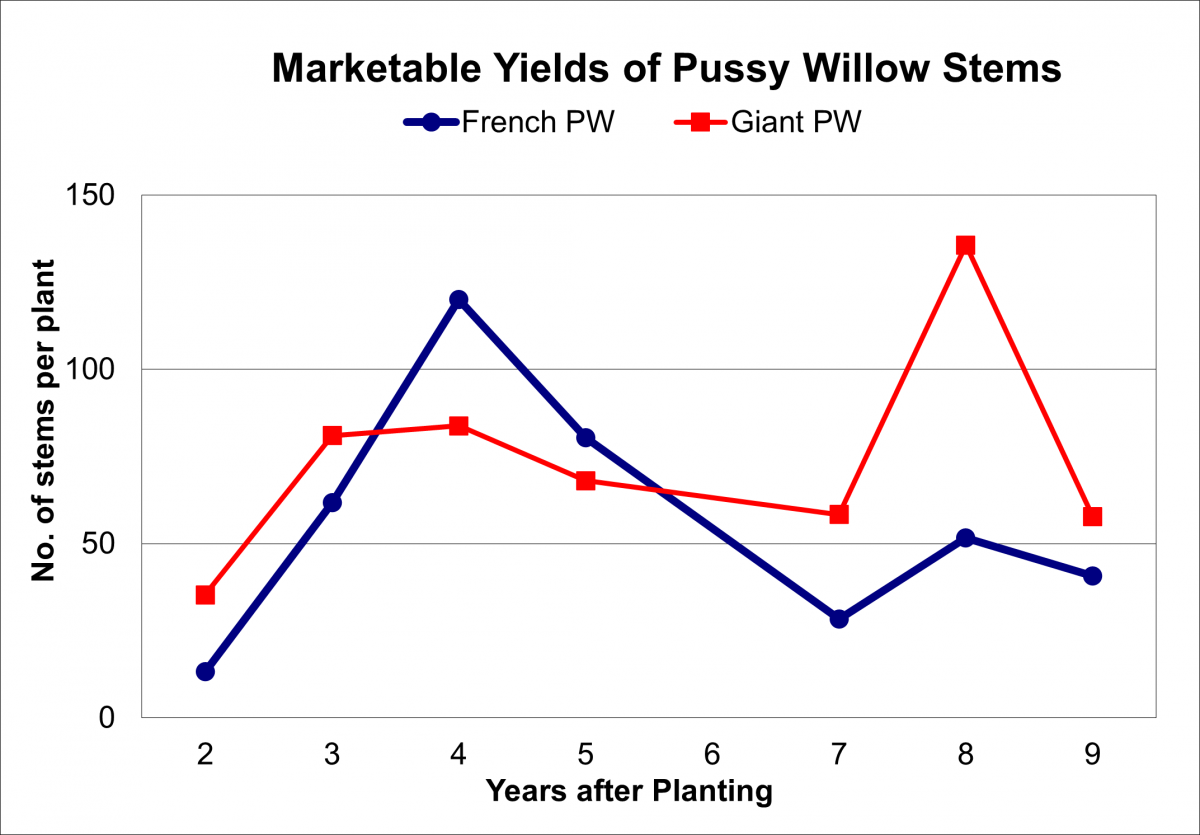 Pussy willows are large shrubs preferring moist to wet soils and full sun but not requiring them. Like red-twigged dogwood, cutting robust stems back low to the ground will promote many vigorous straight stems to emerge in the spring. Fertilizing, mulching and spacing requirements are the same as for shrub dogwoods. Willows also get a canker disease in the mature stems and trunk but it is not the same fungus that infects dogwoods. Be vigilant about pruning out visible cankers. Consider planting new rows every so often (preferably at a distance from the infected plants) and destroy old
canker-infested plantings after several years, when plant vigor and yield decline.
The stems are usually harvested when the catkins (male flowers) start to expand in early spring and are bunched in groups of ten stems for retail Some stems can be cut earlier and forced in buckets of water in a warm room to extend the marketing season. Once the catkins are open, let the
stems dry to prevent them from developing further and releasing yellow pollen.

There are several other species of willows which can be grown for floral and craft use (such as basketry), including the unusual black pussy willow (Salix gracilistyla ‘Melanostachys’) with small black catkins borne on deep purple-red stems. Curly willow (Salix matsudana) is easy to grow in zone 5 and parts of zone 4. The contorted branches are of high value, sometimes sold green and sometimes dried. Japanese fantail willow (Salix sachalinensis ‘Sekka’) is another unique, high value crop with good potential for growing and marketing locally . Yields of over 100 stems per plant, most over three feet long, were achieved after three years. Just over forty percent of the stems were fasciated (giving them the flat fan shape desired). The fasciated stems are usually cut before the catkins emerge for use in dried arrangements, but the remaining stems may still be harvested and sold as regular pussy willows, although not as attractive as the giant and French types. There was no winter damage even in extremely cold years, and no evidence of canker diseases or insects on these plants.

Red-twigged dogwood, winterberry and pussy willow are adaptable to our climates and soils, require little maintenance once established, provide winter work and income, and require no special handling or equipment. They can be easily grown, and the market potential is very good if you start with a small number of plants and develop markets for your product at a fair price. Local florists, retailers, and winter farmers markets are good outlets for direct sales. Wholesale markets and brokers provide potential opportunities for moving large quantities of product, but the lower prices offered and competition from other areas of the country may limit the potential for a sustainable and profitable wholesale enterprise.
The main production challenges in northern New England are deer (and occasionally, beavers, bears and other critters) when plants are young, and canker diseases as plants age. Temporary deer fencing could prove to be a good investment. Once canker infects the base of the plant, it will eventually cause it to decline, so consider that both dogwoods and pussy willows have an estimated lifespan of ten to twenty years. New plantings should be installed away from infected older plantings.
Keeping weeds under control during the first critical growing season is also important to success, and supplemental irrigation may be needed during that time. Access to refrigerated storage is needed if you will be storing product for several days or longer.
We have discussed three woody cut crops which are harvested in late fall through early spring, providing good potential for off-season income to farm enterprises. There are many more woody shrubs that can be cultivated for cut flowers when in bloom, from forsythia in early spring through hydrangeas in late summer-fall.