New Hampshire’s lowland spruce-fir forests usually occur at elevations between 1,000 and 2,500 feet on poor soils such as wet flatlands, cool river valleys, and rocky ridgelines. Red spruce and balsam fir are the dominant trees, often mixed with yellow and paper birch. Hobblebush and blueberry are common in the understory, along with bunchberry and trillium on the forest floor. On sites where the soil is very poorly drained, such as in peat bogs, black spruce is common.

Although they contain many of the same tree species, lowland spruce-fir forests differ from high elevation spruce-fir forests, which grow at elevations above 2,500 feet. The lowland forests are less stressed by the cold and dry conditions of higher elevations, and support larger trees and a more diverse community of plants and animals.

The tree canopy in mature lowland spruce-fir forests tends to be patchy, with areas of dense young trees, standing dead trees, and areas of large trees with an open understory. This patchy character is the result of wind storms, naturally-occurring insect outbreaks, and openings created by beaver impoundments.

Where are Lowland Spruce-Fir Forests in NH?

Why are Lowland Spruce-Fir Forests Important?

New Hampshire lies at the southern edge of the range of spruce-fir forests in North America. As a result, New Hampshire’s lowland spruce fir forests support over 50 wildlife species that do not occur in most other parts of the eastern U.S.

Winter wildlife cover
Lowland spruce-fir forests are a great source of cover and food for wildlife. Both spruce and fir trees have thick, low-hanging branches that provide winter cover for whitetailed deer, moose, ruffed grouse, and other wildlife. During winter, deer in northern New Hampshire require dense stands of mature spruce and fir for protection from cold temperatures and deep snow. Some historic deer wintering areas or “deer yards” have been used by large congregations of deer for more than 50 years. 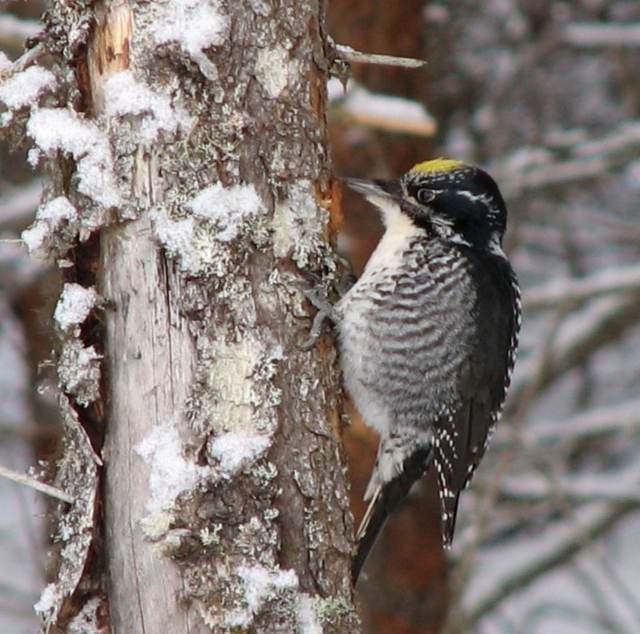 Complex forest structure
Windthrown trees are common in the shallow, wet soils of lowland spruce-fir forests, adding to the complexity and diversity of these forests. While red spruce trees can live for 400 years, balsam fir is shorter-lived, and begins to decay after 60+ years and won’t live beyond 200 years. The resulting standing dead trees, or “snags,” are a rich source of insects and provide tree cavities for wildlife such as black-backed and three-toed woodpeckers (see picture at right). The complex forest structure – trees of different ages and sizes, fallen logs, and dead trees – also creates excellent habitat for reclusive species such as spruce grouse, as well as for small mammals and snowshoe hares. Both the American marten (threatened in New Hampshire) and Canada lynx (endangered in New Hampshire) rely heavily on small mammals and snowshoe hares to survive.
[Photo credit: Dave Govatski]

Unsustainable timber harvesting practices
Spruce and fir have been valued as timber for over 100 years, and have been harvested extensively over that time. With their shallow and wet soils, partial harvests of spruce-fir forests are more susceptible to windthrow, so forest management has favored clearcutting. Young forests created through clearcutting can be beneficial to some species, particularly snowshoe hares and thus lynx, which prey on hare. However, extensive clearcutting has produced an imbalance of tree ages that affects the habitat for other species. Today’s lowland spruce-fir forests are very young, withover 70% of the trees measuring less than 2” in diameter. Less than 2% of the trees are larger than 10” in diameter. These young lowland spruce-fir forests usually lack important habitat features such as standing dead trees and logs on the forest floor and areas of large trees. 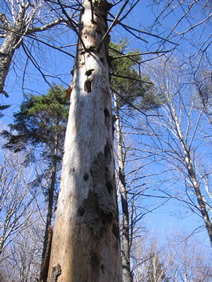 Conversion of spruce-fir habitat
In some areas that have traditionally supported spruce-fir forests, clearcut forests have re-grown into northern hardwood or mixed forests. In many cases, spruce and fir trees will eventually re-colonize the converted hardwood forests. However, with so little mature spruce-fir forests atlow elevation, wildlife dependent on this habitat type can’t linger during the 70+ years it may take for spruce-fir to become dominant.

Click here for the Lowland Spruce-Fir Forests Climate Assessment, a section of the Ecosystems and Wildlife Climate Change Adaptation Plan (2013), an Amendment to the NH Wildlife Action Plan

These wildlife species are closely associated with lowland spruce-fir habitats. Be on the lookout for them and follow stewardship guidelines to help maintain or enhance the habitat for these and other wildlife that use lowland spruce-fir forests. Species of conservation concern--those wildlife species identified in the Wildlife Action Plan as having the greatest need of conservation--appear in bold typeface and are linked to their Species Profile from the Plan.