Thousands of acres of northern hardwood-conifer forests grow on well-drained, fertile slopes of hillsides in New Hampshire, typically between 1,500 and 2,500 feet in elevation. Here, sugar maple, American beech, and yellow birch are the dominant tree species, mixed with red maple, white ash, and patches of hemlock at lower elevations, and red spruce and balsam fir at higher elevations.

Where are Northern Hardwood-Conifer Forests in New Hampshire? 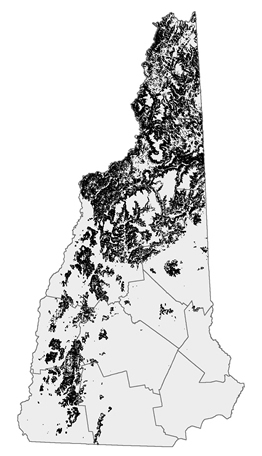 Why are Northern Hardwood-Conifer Forests Important?

Many of New Hampshire’s northern hardwood-conifer forests remain unfragmented by development and roads, making them an important ecological refuge for plants and animals. These forests provide habitat for hundreds of species of wildlife, including forty two mammals and seventy-three birds. 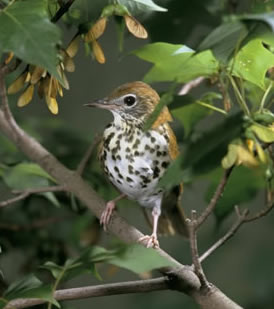 monplace. If they are to remain common, these and other species require a forested backdrop within our rapidly developing landscape.

Refuge for forest birds
New England forests are home to the highest concentration of breeding songbirds in the United States. Migrating birds such as eastern wood-pewee, black-throated blue warbler, wood thrush (at left) and many others carefully time their arrival to coincide with the swarms of insects (such as black flies and mosquitoes!) that are an important food source for young birds. Maintaining rich and healthy breeding areas for these birds is especially important given extensive habitat loss in the birds’ southern wintering sites in South America, Mexico, and the Caribbean.

Uniformity
Many stands of northern hardwood-conifer forest in New Hampshire are the same age, roughly 80-100 years old. They grew back after extensive timber harvesting and abandonment of farms throughout the last century. Many wildlife species of conservation concern found in northern hardwood-conifer forests are attracted to patches of old or young trees within the larger forest area. Today’s forests don’t support the same high diversity of wildlife species as older forests that contain a diversity of live and dead trees of different ages and sizes. Complicating matters, the public may prefer to view extensive, unbroken mature forest. 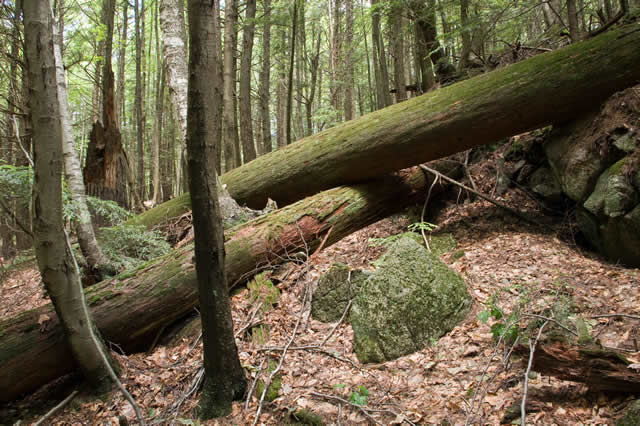 As a result, managers are less likely to make large openings (e.g. clearcuts) which will re-grow into the young forests required by many wildlife species.

Habitat loss to development
Residential and second-home development in northern hardwood-conifer forests has increased in the last quarter century. The problem is cumulative, as each new development fragments the forest into smaller and smaller blocks, eliminating habitat, separating wildlife populations, inhibiting migration, increasing predation and promoting wildlife collisions on roads.

High-grading
High-grading is a non-sustainable logging practice where the best trees are cut and poor quality trees are left to grow. Some northern hardwood-conifer forests have been repeatedly high-graded, and are now dominated by low-quality, low-value trees and are less dense, less mature, and less diverse. High-grading affects wildlife by removing the larger diameter trees, which reduces the development of large nut-producing trees, large diameter cavity trees, and lessens woody material on the forest floor. Read more about high-grading.

Click here for the Northern Hardwood-Conifer Forests Climate Assessment, a section of the Ecosystems and Wildlife Climate Change Adaptation Plan (2013), an Amendment to the NH Wildlife Action Plan

The wildlife species listed here use northern hardwood-conifer forests. Be on the lookout for these species and follow stewardship guidelines to help maintain or enhance northern hardwood habitats. Species of conservation concern — those wildlife species identified in the Wildlife Action Plan as having the greatest need of conservation — are linked to their species profile from the NH Wildlife Action Plan.