The shorelines of lakes, ponds, and rivers are valuable real estate in New Hampshire, but their importance as wildlife habitat is also significant. The qualities that make shorelines attractive to wildlife may be very different from what makes them attractive for boating and swimming.

Shorelines with extensive, mature forests along the shore are critical yet rare habitats in New Hampshire. High quality shorelines are usually found in places undisturbed by buildings, roads, docks, lawns, or heavy recreational activity. At the water’s edge, native aquatic vegetation (plants growing in or under the water), submerged rocks and boulders, and dead trees that have fallen in the water are all features of high quality shoreline habitat. These habitat features become less common as housing density increases around lakes, ponds or rivers.

Underwater vegetation is particularly valuable as cover for wildlife, especially in larger lakes and ponds where wave action or deep water limits the amount of shoreline where plants can grow. Look for plants whose foliage appears to float at the surface or under the water, such as pond lilies, pondweeds, coontail, bladderwort, and native milfoils.

The best shoreline habitat has large areas of diverse underwater vegetation such as coontail and bladderwort mixed with aquatic plants such as pickerelweed and yellow pond lily that grow in scattered stands. When these features are found near deep water, shoreline wetlands, and upland forests, the shoreline habitat becomes a productive hunting ground for great blue and green heron, otter, mink, and larger fish such as eastern chain pickerel and yellow perch.

Why are Shorelines Important?

The quality of shoreline habitat may be the single biggest influence on the abundance and variety of wildlife that live in or around a water body. lakes, ponds and rivers with plentiful natural vegetation and undeveloped shorelines surrounded by large blocks of forest will support the greatest number of wildlife species. By comparison, water bodies dominated by docks, stabilized banks, lawns, beaches, houses, and heavy boat traffic support far fewer wildlife species.

Water quality protection
Pollution from widespread sources like roads, houses, and cars (as opposed to factories and other “point sources”) is the number one threat to water quality in lakes and ponds in New Hampshire. Native shrubs and trees growing along shorelines help protect the water from soil erosion, runoff, pesticides, chemicals, and excess nutrients. These pollutants kill fish, promote the growth of aquatic weeds, and muddy the water, all of which diminish the value of the lake, pond
or river for homeowners, boaters, anglers, swimmers, and wildlife alike. Once a lake, pond, or river has been degraded, it can be difficult to restore its quality. Learn more: NH Lakes Management & Protection, NH Rivers Protection 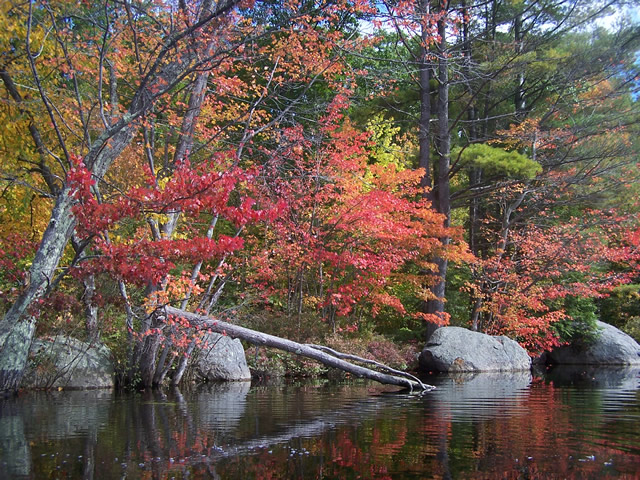 Natural vegetation
Land along shorelines is critical wildlife habitat. Loons need undisturbed shoreline for nesting at the water’s edge. Warbling vireos and song sparrows nest in the branches of shoreline trees and shrubs, and common mergansers use hollows in dead trees. Even trees and shrubs in front of a home can provide valuable cover for passing animals and minimize disturbance to ducks and loons swimming by. Forested shorelines allow forest animals such as moose or raccoons to use the water and food available at the shore.

Dead trees in the water provide habitat for young and adult sunfish, and underwater branches serve as attachment sites for pickerel frog and green frog eggs. Partially submerged tree trunks make excellent sunning spots for painted turtles. Important as it is for wildlife, downed wood from fallen trees is a rare habitat element on developed shorelines, as it’s usually removed as an impediment to boating and swimming. Some bare shorelines, such as those along large, fast moving rivers that are regularly scoured by water and ice, can still be important habitat for wildlife such as dragonfly larvae, bluegills and freshwater mussels. 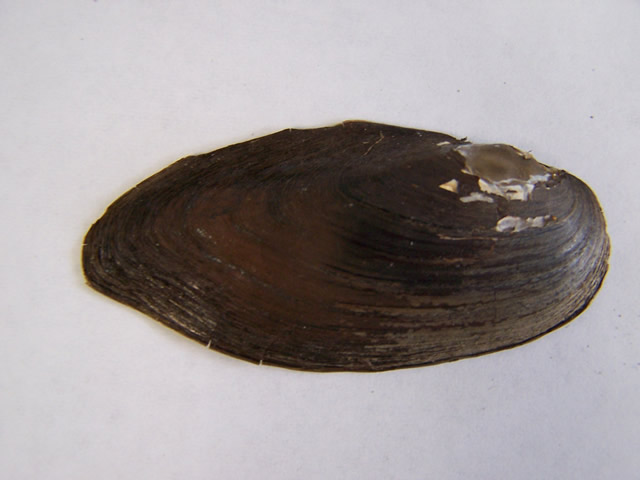 Coves and shallow areas with aquatic vegetation are used as nursery and spawning habitat for many fish, including the state-threatened bridle shiner. A lack of vegetation will ultimately affect fish diversity in a lake or pond. Young fish, insects, and amphibians living in shoreline habitats attract hawks, herons, ducks, mink, raccoons, and northern water snakes which all forage along shorelines. Predatory fish, including bass, pickerel, pike, and creek chubsuckers all forage in aquatic vegetation. Sunfish spawn in circular depressions in shallow water and crayfish are abundant in rocky shallows. Lake shores and shallow ponds are also the home of musk turtles, painted turtles, and snapping turtles. Aquatic plants provide cover for aquatic invertebrates such as snails and dragonfly larvae, which are in turn fed upon by fish and other predators. Filter-feeding freshwater mussels burrow in the fine silt trapped by aquatic plants.

Threats by invasive plants
Invasive plants such as variable milfoil and fanwort threaten the diversity of plants and wildlife in New Hampshire. Invasive plants take over native vegetation and offer less-valuable habitat and food sources for many species of wildlife. When large mats of invasive plants die, they deplete the water of oxygen, which also threatens wildlife. Learn more about aquatic invasive plants.

Click here for the Lakeshore and Rivershore Climate Assessment, a section of the Ecosystems and Wildlife Climate Change Adaptation Plan (2013), an Amendment to the NH Wildlife Action Plan

The wildlife species listed here are closely associated with shoreline habitats, but many other species will use shorelines at some time during the year. Be on the lookout for these and other species that use shorelines, and follow stewardship guidelines to help maintain or enhance these habitats. species of conservation concern—those wildlife species identified in the wildlife action plan as having the greatest need of conservation—link to their NH Wildlife Action Plan species profiles.