On a sunny summer day, Pete Ferraro works alongside other volunteers tending to a unique garden in Hampton — a plot of beachgrass that, with some help, will restore dunes along Hampton Beach. Though he doesn't live on the ocean, Ferraro cares deeply about the coastline. "I started volunteering," says Ferraro, "because I felt I wanted to do something to make a diﬀerence in the world."

New Hampshire's dunes are in decline, partly due to development and coastal erosion. A partnership between UNH Cooperative Extension and N.H. Sea Grant aims to shore up Granite State dunes using a beachgrass garden.

Dunes were once more abundant —  currently they cover just 16 percent of the coastal stretch they once occupied and make up about 10 percent of the state's 18 miles of coastline. Dunes provide habitats for native species such as monarch butterﬂies and endangered piping plovers, protect oceanfront homes from storms and annually attract crowds of tourists searching for picturesque views. Restoring them is an environmental and economic win.

"Larger, less fragmented dunes provide more protection from storm damage," explains Alyson Eberhardt, a N.H. Sea Grant and Extension coastal ecosystems specialist. Eberhardt and UNH faculty members Gregg Moore and Dave Burdick put that idea into action when they formed the Coastal Habitat Restoration Team in 2014. They have since planted more than 120,000 stems of beachgrass onto public coastline in the state.

Native plants like beachgrass act as anchors for dunes. Restoring these plants is the ﬁrst step in restoring dune ecosystems. Doing so requires a team eﬀort involving partnering organizations, volunteers, and private property owners, who own much of the land on which the dune ecosystem is located.

That's where the Common Garden comes in. The UNH Coastal Habitat Restoration Team, with assistance from N.H. Sea Grant and Extension's Coastal Research Volunteer program, received a grant from the N.H. Coastal Program to plant a garden of native dune plants near Hampton Beach State Park to share with landowners ready to restore their dunes. 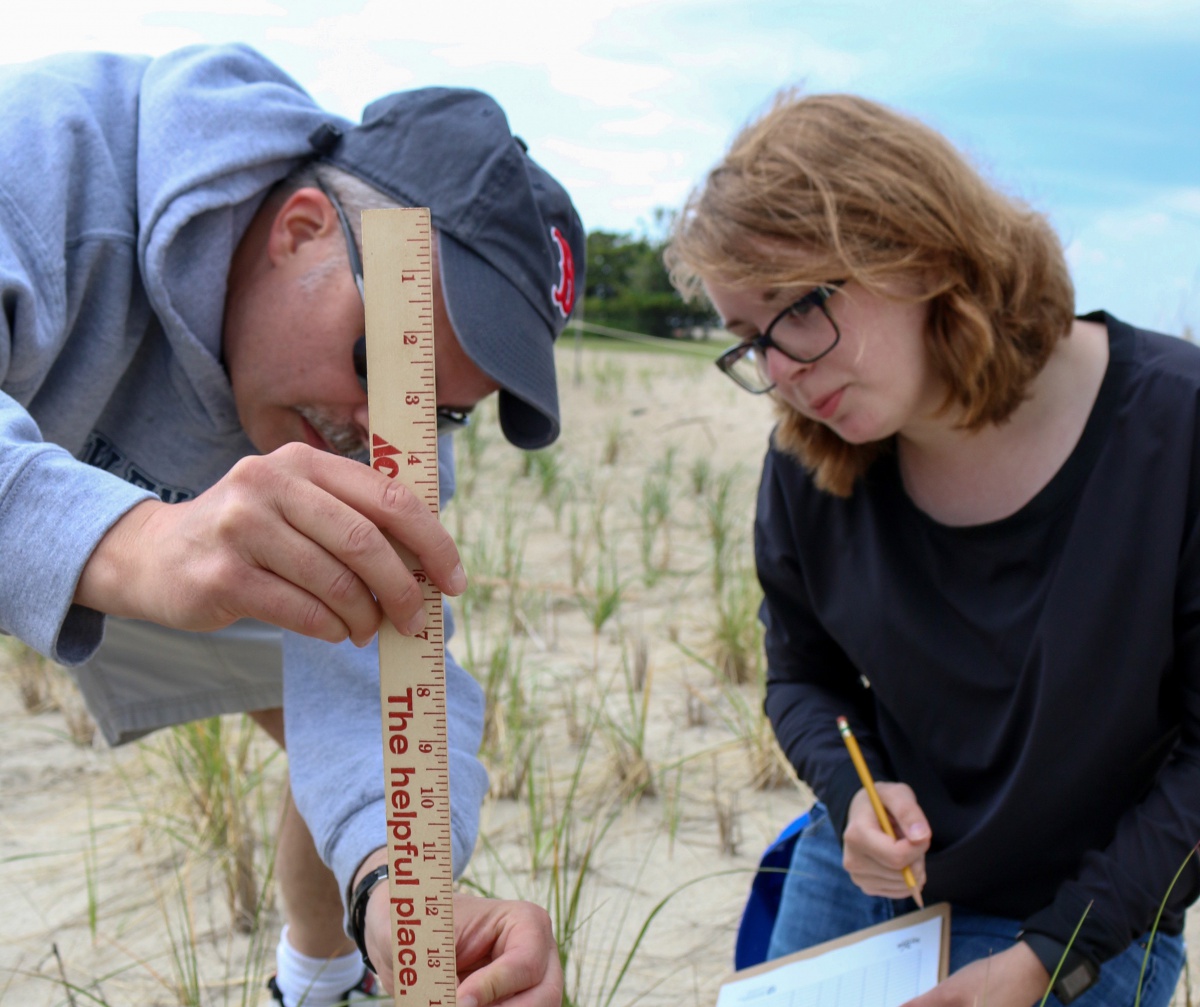 Community volunteers tend to and collect data on plant growth in the garden, now in its second year. Other partnering organizations include the state Department of Resources and Economic Development, the Seabrook Conservation Commission, and Seabrook Middle School. This project was funded in part by NOAA's Oﬃce for Coastal Management under the Coastal Zone Management Act, in conjunction with the N.H. Department of Environmental Services Coastal Program.

"Those who have seen the garden really like it, both for how it looks, and for the potential it creates to naturally reinforce our dunes and other structures," says Jay Diener, vice-president of the Hampton Conservation Commission and co-founder of the Seabrook-Hamptons Estuary Alliance. "It is a great place to start discussions with residents and visitors alike."

Learn more about restoring dunes on your property here or email alyson.eberhardt@unh.edu.

This story originally appeared in the 2017 edition of Radius.