If You (Re)build It, Will They Come?

Christine Soutter shares at least one thing in common with 25 other community leaders convened by UNH's Economic Development Academy this fall: they shoulder the hopes and expectations of the citizenry to keep their communities economically healthy—not a light responsibility in these post-recession days.

Factors beyond recent hard times have made it difficult for New Hampshire’s cities and towns to remain economically sound. A community, like a living thing, grows and changes. It goes through stages of vitality and fatigue. It endures periods of identity crisis and the indignities of passing time. And there are days when its very future seems in doubt.

The Economic Development Academy, co-created by UNH Cooperative Extension and the Office of the Senior Vice Provost for Engagement and Academic Outreach, offered six intensive sessions for community planners, economic development managers, and government personnel to tackle their communities’ economic difficulties by exploring research, hearing from experts, and learning from the best—each other.

To make the academy experience relevant and productive, each participant was asked to bring an economic problem or task currently facing his or her community. “The intent was to use their time at the EDA to craft concrete solutions for a real problem,” said Extension’s Community and Economic Development Team Leader Charlie French.

Even before their final session on November 21, the participants had already begun putting their new ideas to work. 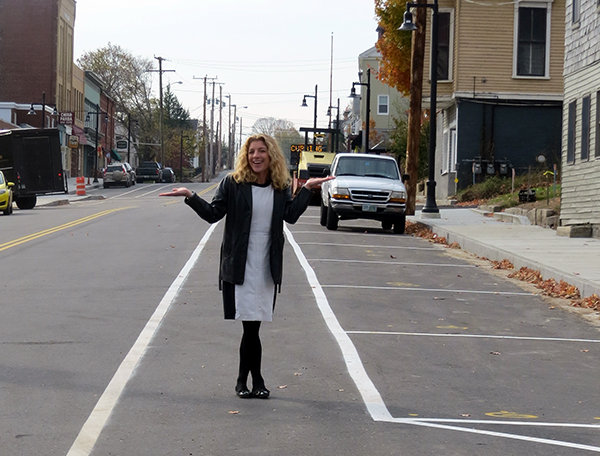 Soutter’s job as economic development manager is to retain and recruit new businesses to Somersworth, one of the state’s smallest cities at about 12,000 residents. Like many New Hampshire cities and towns, Somersworth’s identity was defined by its economy—textile mills and sawmills—and faced the same chilling question: what would take their place when those industries disappeared to keep the economic engine running?

Job one for Soutter: breathe new life into the downtown zone, an historic area once home to the mills and homes for millworkers, along the river bordering Maine. The city has invested millions of dollars in a facelift for the Somersworth/Berwick Bridge; rehabilitation of the water, sewer, and drainage systems; wider sidewalks; and beautiful street lamps. New shops and restaurants have begun to turn downtown into a gathering place—on a recent early fall morning, one newcomer restaurateur could be seen, apron on and broom in hand, tidying up his shop and the new sidewalk just outside his door.

“It’s all about downtown,” Soutter said. “This area isn’t necessarily the financial engine of the community, but it is our face, our first impression. A city may have great schools, a strong business climate with good companies, but if the downtown is rundown, that affects the sense of community. Today, businesses in Somersworth are talking about pride.”

“Today, businesses in Somersworth are talking about pride.”

Soutter came to the Economic Development Academy seeking inspiration for taking the downtown renovation to completion. “Knowledge is power and community is strength,” she said. “This was an opportunity to learn from a great institution. I’ve gotten so much out of getting together with my colleagues from other communities to share ideas.” She has most valued this face-to-face interaction with others, sharing stories about their struggles and what they’re hoping to accomplish.

Specifically, Soutter is searching for ideas on how to recruit investors. “We still have buildings that need to be rehabilitated downtown. The success of this effort relies, in part, on having enough market-rate housing downtown to support current and future businesses.”

One aspect of the problem, Soutter said, is the city’s “abundance of subsidized/low-income housing,” much of it located downtown. It’s a self-perpetuating cycle, she notes—residents of low-income housing don’t have the disposable income to buy the merchandise or services of downtown businesses, so the businesses suffer.

“The downtown shops need customers who live within a short drive or, preferably, walking distance,” Soutter said. She hopes that investors will buy, rehabilitate, or replace buildings that detract from the downtown’s inviting nature. “Part of our challenge will be to convince owners to sell their buildings to others who want to make the needed investments.”

By listening to the stories from her academy counterparts from other communities, Soutter is building on the experience of cities that have overcome the common challenge of reinventing downtown zones. Newmarket invested in its downtown and created market rate housing. “Their shops are thriving now,” she notes. The renovation of mills into upscale apartments in Dover has led to a better business climate in downtown Dover. “Manchester created nice apartments along Elm Street, contributing to a thriving area day and night with shops and restaurants.”

Somersworth has invited its residents to reclaim downtown and restore it to “gathering place” status, with infrastructure improvements that enhance safety and, literally, shine warm light on a part of the city that had gone dark. The next chapter in Somersworth’s history will tell whether the city’s invitation has been just as warmly accepted.