This year’s Economic Development Academy wrapped up with a final graduation ceremony on Friday that featured three keynote speakers, as well as participant success stories.

The first keynote, Dr. Shannon Rogers and UNH Masters student in Recreation Management and Policy, Samantha (Sammie) Powers, spoke about the nature economy and how communities can leverage trails, waterways, and natural amenities to strengthen local economies. Sammie presented her Extension supported research, which used aerial assessments and spatial technology to rate how well connected trails are to different New Hampshire downtowns, as well as what towns are doing to strengthen these linkages. 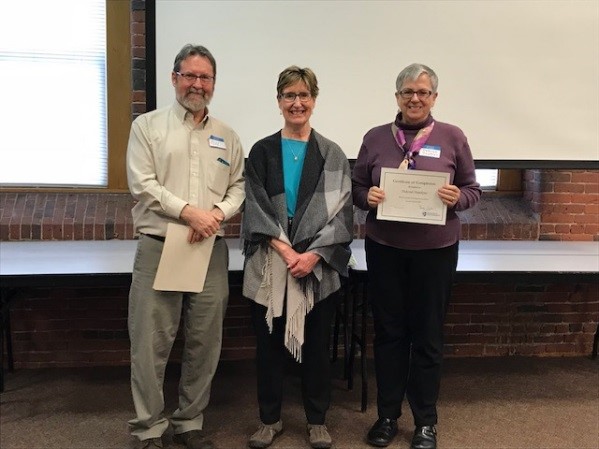 Elizabeth Dragon, former town manager of Franklin—and 2016 EDA graduate—spoke about her final EDA project to develop a whitewater kayaking park in downtown Franklin at the juncture of three rivers. In spite of the fact that this project had to undergo layer upon layer of approval, it is on the verge of moving forward. Once implemented, it would be the only major whitewater kayaking park in the East Coast and it would be an economic engine for the City of Franklin. Lastly, Andre Garron, Community Development Director of Salem, spoke to collaboration and communities coming together to scale up economic development efforts.

Of this year’s graduates, several reported that their EDA projects are already getting legs. Stephen Meno, Regional Planner in Southern New Hampshire said, “The EDA provided such a good network that helped me complete my project. I gained invaluable insight, recommendations, and case studies to help me research the feasibility of expanding a collaborative working space in the Nashua Region.”

Another EDA graduate who works for the Cooperative Fund of New England, Deborah Hawkins, developed a resource guide for retiring small business owners who are struggling with succession planning because they can’t find a buyer for their businesses. Instead of closing the business, they might maintain it by selling to their employees. This simple resource has helped enterprises to stay in business, therefore resulting in jobs and services retained in the community.

The Economic Development Academy completed its fourth year and has graduated close to 100 participants in total.