In the last decade, consumers, farmers and chefs across the country have embraced the farm-to-table ethos. It’s easier than ever for consumers to savor the crunch and color of salad ingredients grown just a few miles away or feast on a burger made from locally-raised beef.

In New Hampshire, the “farm” and “table” parts of the equation are familiar: Granite State farms are iconic fixtures of the landscape and some restaurants in nearly every community proudly serve local foods.

But that “to” part—how all that food makes its way from producer to consumer—isn’t so easy to navigate, even for the farmers, chefs and other buyers involved in the process.
That’s why a group of Seacoast farmers are building a regional food hub—one that they hope will make it easier for farmers to sell their products, for businesses to buy and for communities to build a sustainable food system. 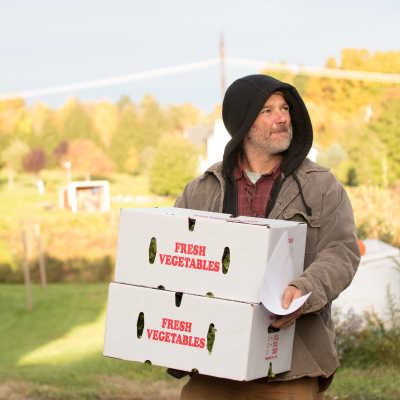 Haddad works with many New Hampshire farmers in the state to improve business practices and marketing approaches. She hosts events where members of the farming community can share their approaches so that others can learn and grow. At a 2018 conference on Farm to Table marketing, Haddad invited Andre Cantelmo and David Vargas to share how a Seacoast food hub came to be.

Andre Cantelmo and Greg Balog have owned Heron Pond Farm in South Hampton for 18 years, where they’ve built a reputation as leaders in small farming practices and community involvement. About five years ago, the two conducted a viability study for the farm and learned that they should sell a portion of the farm’s produce on the local wholesale market.

That’s easier said than done, according to Cantelmo.

“Chefs want local product, and farmers think, ‘Great, customers!’” he said. “But then you start delivering to the chefs, who have to deal with 12 different farms, 12 different trucks and 12 different phone calls. It becomes a little less romantic for them at this point. And the farmer, he now has 20 stops all over the place, and a few are just for $20 (in sales), and then he comes home after being gone all day and does the numbers and says, ‘I’m getting killed just bringing it to people!’” 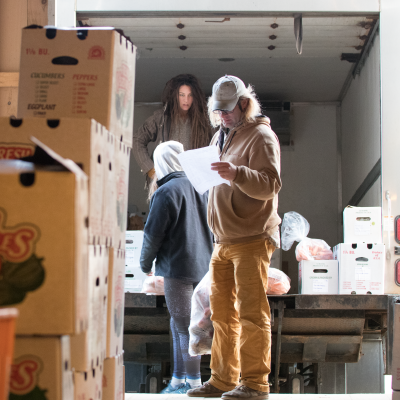 Cantelmo realized he needed a better way to get product to customers and he needed help figuring it out. He called up two farmers who he respected as innovators and friends: Kate Donald of Brentwood’s Stout Oak Farm and Josh Jennings from Meadow’s Mirth Farm in Stratham. Donald has a reputation as a savvy grower committed to growing an array of organic vegetables; Jennings was the largest provider of wholesale local produce and already had a truck delivering his food to local restaurants and markets.

Cantelmo told them, “Heron Pond Farm is going to start wholesaling, and we see a problem with delivery costs. We would like to figure out a way to share the load.”
For months, the three met after farmers markets on a plan to bring all their products to wholesale customers in a profitable way. They agreed that they needed a place to gather the food for delivery and a system to make it happen. What they needed was a food hub.

A system of service

Food hubs are centrally-located facilities that collect, store, process and distribute local and regionally-produced foods, according to the USDA. According to Sustainable America, there are 236 food hubs in the U.S., but only a handful in New England.

It might sound like a complex operation, but it’s simple—think of them as ridesharing for farms.
Jennings compares them to traditional farmers markets. “You are all cooperating to present a space for commerce,” he says. “You are better off as a group than individually".

Working together, the three farmers identified some key requirements of a food hub for the Seacoast. First, each farm would need to retain ownership of the products throughout the system to adhere to food safety standards and maintain the integrity of their customer relationships. The hub also needed to be organized and scalable, able to grow as more farms joined and the local food community expanded.

Ordering must be easy

Lastly, the start-up food hub needed to be nimble and adjust quickly to changes in the Seacoast food scene.
Using their own experience and other food hubs as examples, Cantelmo, Donald and Jennings established Three River Farms Alliance in 2014 as “a network of farms and local producers, working cooperatively in the Seacoast … to market, aggregate and distribute locally produced food.” Food hubs are often nonprofit organizations, but the three believed a small, jointly-owned business was critical for creating a nimble startup. They provide weekly deliveries of locally-produced food year-round to restaurants, grocery stores and institutions.

From app to appetizers

Chefs are notorious for working crazy hours, often only finding time to do paperwork in the wee hours of the morning. That is why Three Rivers customers can place their weekly orders 24/7 online, either through the TRFA website or mobile app. Every Tuesday TRFA’s 25 local farms download their orders, harvest what they need and deliver the products to the large walk-in coolers at Heron Pond Farm. Before the sun rises the next day, Cantelmo, Jennings and two other employees load up the trucks for local deliveries in the Seacoast. They do this again the next day for deliveries to southern New Hampshire and the North Shore of Massachusetts.

Wholesale customers receive monthly invoices from TRFA, which in turn passes the payment to the farmers, minus a 16%. “We don’t call it a charge, since there is no profit from it” says Cantelmo. “Our goal is to just share the operating costs of delivery.”

Through the app, both farmers and customers know where their products are and how they are being stored. Online sensors in the storage coolers and on the trucks report temperatures and other important information, ensuring food safety and that the chain of possession from farm to customer is maintained. “Legally, it’s really important for everyone, but also nobody else has this transparency. You are ordering from the farms; all we do is delivery,” Cantelmo said.

An exercise in trust

The farmers that make up TRFA are, in a sense, working closely with their competitors. It can be unsettling—why share your customer list with someone who’s selling the same products as you? It’s all a matter of trust, according to Jennings, and faith that as the local food community grows, so too will each farm.

"Starting small and building trust is really the key"

“When we started, there were certain wholesale accounts that, if I lost them to another farm, my business would take a severe hit,” said Jennings. “But the farmers knew each other, they respected what each was trying to do and they simply had to trust each other so the entire local food community could grow. Over time, the worry of lost accounts dropped away. We are large enough now and we’ve built up enough trust among ourselves that we worry more about growing the business than defending our individual farms. It is real easy to be secure when you sell everything.” 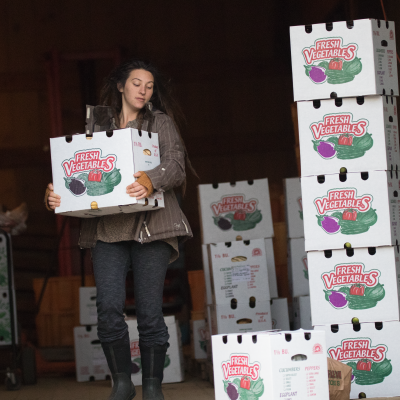 Chef David Vargas is an active customer of TRFA. He owns Vida Cantina in Portsmouth, co-owns Ore Nell’s Barbecue in Kittery, Maine, and makes thousands of tortillas each day at his Dover company, Vida Tortilla. He sources his heirloom corn from Tuckaway Farm in Lee via TRFA, and buys from several other farms to fill his menus. The California native values his friendships with farmers and other chefs whom he regularly meets with to talk about the local food scene.

“It did not sink in until I came to the Seacoast, but we are very, very blessed to be such a strong community,” Vargas said. “We can come together and talk about things; we can research things, try different products and tell each other how it worked. We are all doing the same thing and we all want each other to succeed. I don’t say that our food here at the restaurant is farm-to-table. I say it is community-to-table.” 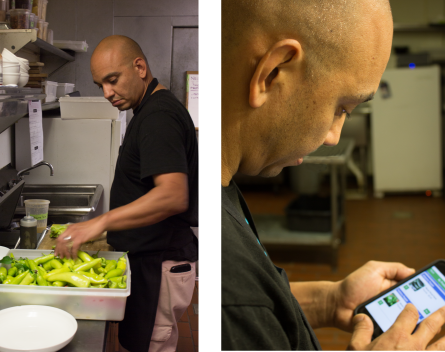 Not all communities are ready to support local food systems. Farmers, chefs and any citizen can move their community in that direction by reaching out to others, to businesses, schools, local government officials and really, anybody about what is needed to keep the local farmer thriving. Sharing ideas and needs improves understanding and in turn support. Cantelmo sums it up as “We are all business people and we are all trying to survive. We all get scared at times. But starting small and building trust is really the key.” 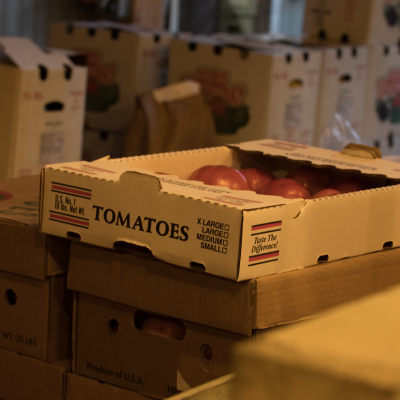