Meet the Water Wizards 3.0: Anna Numme, Wilson Zhang, Brian Heacock and Thomas Shepherd. These four 4-Hers (of the Rogue Robots 4-H club) represented New Hampshire at the National SeaPerch Competition in Maryland on June 1 and 2, 2019.

SeaPerch is an international underwater robotics program that teaches basic science, technology, engineering and math (STEM) concepts with a marine engineering theme. Teams work together to design and build underwater remotely-operated vehicles (ROVs), and then battle it out on an underwater obstacle course or through a mission-based challenge.

After a thrilling regional competition season full of troubleshooting equipment failures, navigating the nuances of competition rules, a complete redesign of their robot and a whole lot of Queen tunes, the Water Wizards hit the road with the Party Peach (their SeaPerch ROV) for Nationals.

We caught up with the Water Wizards at a practice at their home pool in Claremont just before they left. Once they got a few practice runs in and the "We Will Rock You" loops were paused, we were able to ask the team some questions. We learned about what it is like to be on a competitive robotics team, how their ROV got its name and what makes SeaPerch such a fun and engaging program. 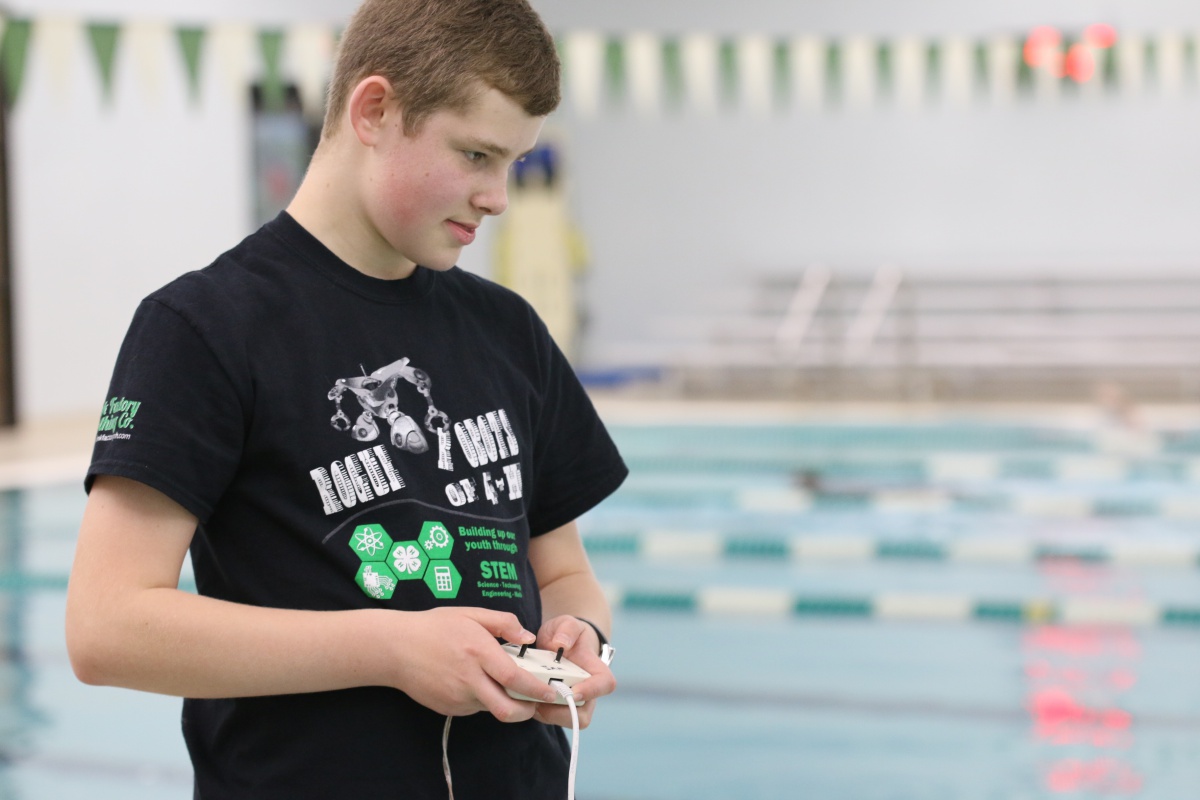 How did you get involved in the SeaPerch program?

Anna: We went to Seacoast Science Day and saw the SeaPerch robots. They looked awesome, so we got involved.

Thomas: I like flying drones and I went to the USAF drone challenge, where I met Anna and she told me about it.

Brian: The SeaPerch competition was an option to do in Rogue Robots. I was too busy skiing to do it my first year, but I heard it was fun, so I tried it this year and have had a great time. 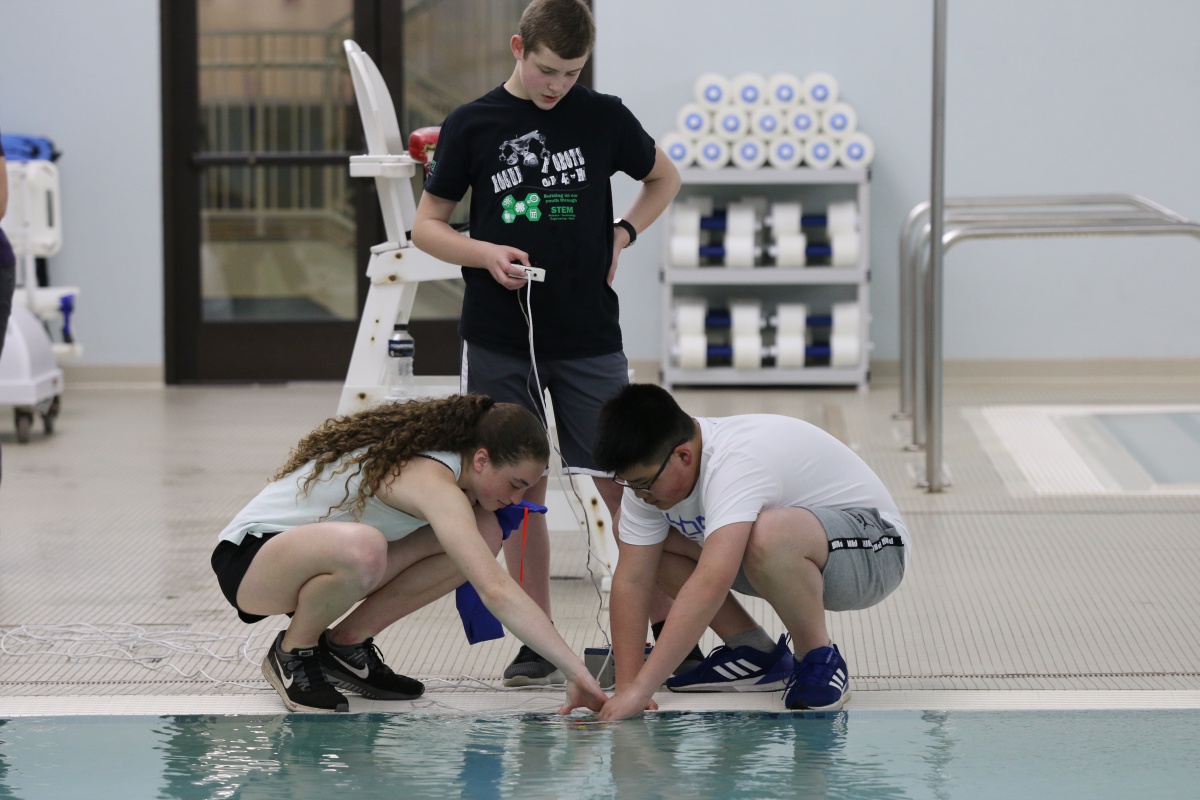 What role do each of you play on the team?

Anna: We all help with design. But I do tether controls when it is driving, making sure it doesn't get tangled.

Wilson: Most of the work I did was 3D printing. I created quite a few designs.

Thomas: I'm the driver, so I maneuver the robot through the course.

Brian: On the team I do some of the building. I waterproofed the motors and did some soldering. I also put in the screws to bend the PVC pipe to give the perch a curved front.

What goes into preparing for a competition?

Anna: We had a lot of technical issues at the UNH competition. That was good practice.

Thomas: Lots of practice, too. We are working on getting our times down. Testing new designs.

Ana: Yeah, a lot of our time is spent on the engineering design process. Step one is always define the problem, so, "What we must do in the water?" Then we build a prototype and come up with ideas and then the next step is testing the design. Then we had to deal with the buoyancy.

Wilson: Yeah, we had to attain neutral buoyancy. It was also giving us some trouble with tipping up at the front a little bit.

Brian: In preparing for the competition you must build your ROV and test if it is statically balanced and dynamically balanced; that is a lot of work to do. Then the driver needs to be able to steer the ROV through the course and the tether person must give enough tether for it to drive and take enough tether so it will not be tangled but not so much that they are pulling the ROV.

Anna: Yeah, once you get the static balance working, you then have to test for dynamic.

Thomas: Our first design had some issues with the proboscis (a design element used to execute tasks in the mission challenges) that caused it to pitch a lot. We tried to fix it. It didn't work out after a few versions, so we scrapped it and came up with a new design entirely, which works well.

Anna: Coach helped us with our adjustments. We're taking the new design to the competition. 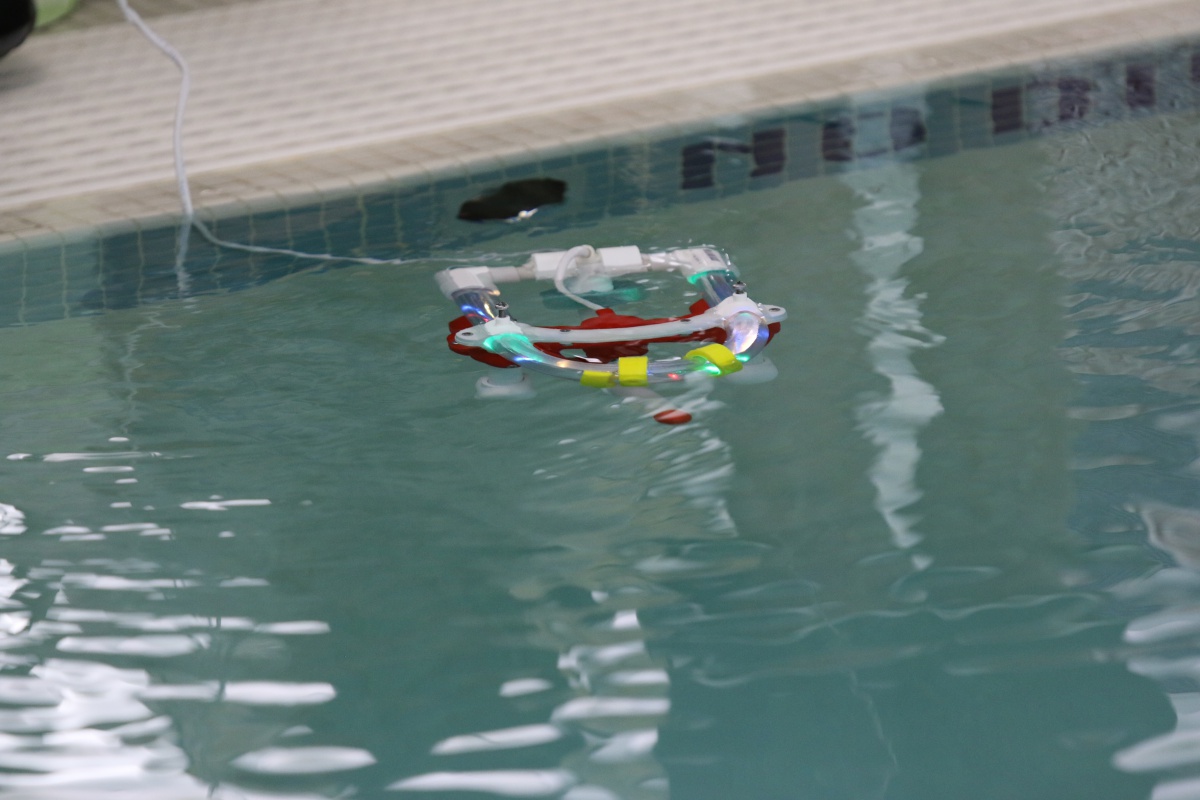 All: Stressful. And fun.

Thomas: Sitting there, waiting to go, is nervewracking. But I am more nervous after because I am hoping people can't beat our best time.

Anna: The fun part is that you work hard to create something and then you put a lot of work into it and see it in action.

What's your favorite part about the SeaPerch project?

Anna: It's great to be around other people who want to work hard on a team project.

Brian: Troubleshooting problems and figuring out as a team what needs to be fixed.

Do you have a theme song?

All: "We Will Rock You" by Bohemian Rhapsody and "Baby Shark" are all on rotation. 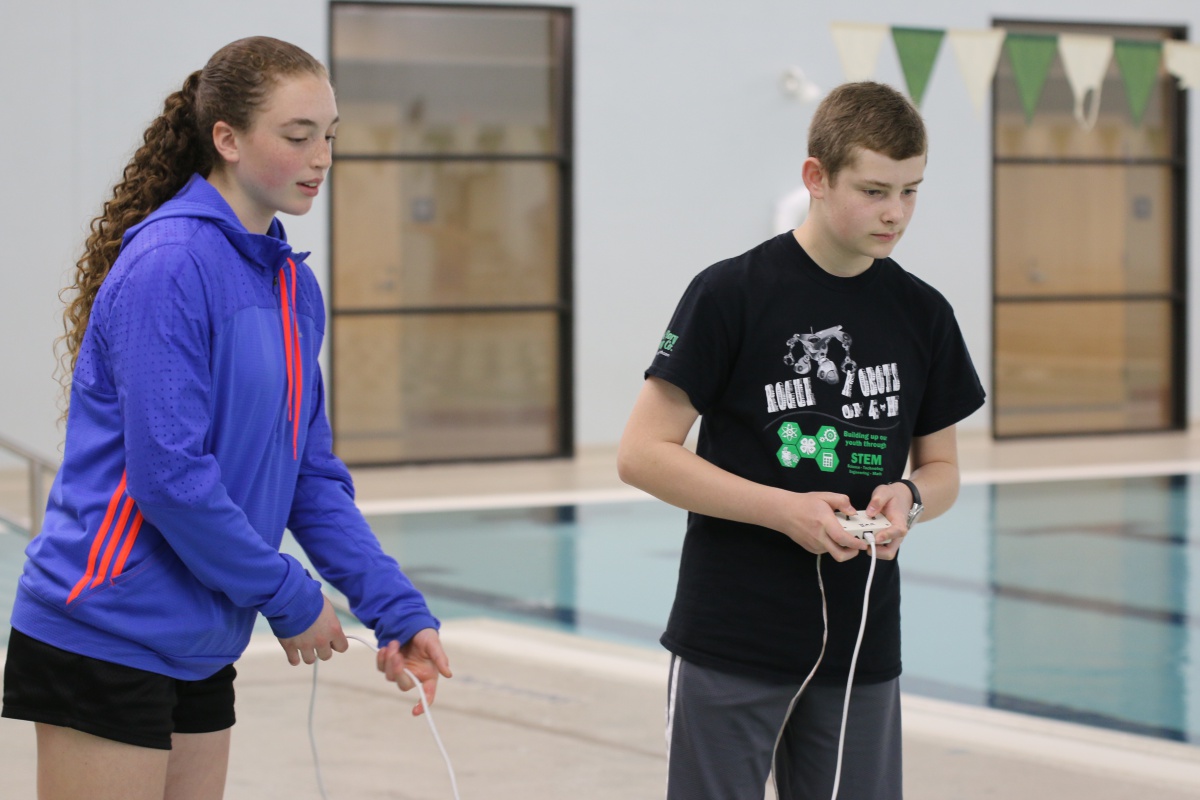 What was your reaction when you found out you made it to the national competition?

Thomas: We were surprised. The team who came in second was amazing.

Anna: I screamed in Wilson's ear

Are there any special preparations for the national competition?

Thomas: We're following the same steps, but we're practicing longer and getting to know the new SeaPerch. Obviously, we want to do well but we are excited for the experience.

If you met someone who had never heard of SeaPerch before, what would you tell them about it?

Wilson: It's fun. Think of it as a robot that you can control, of your own design, swimming through the water!

Does your Sea Perch have a name?

Anna: The Sea Peach! Wilson had an autocorrect error of SeaPerch in an email, and it stuck.

How have coaches and mentors helped you get to where you are today?

Wilson: Jeff has really helped me come up with designs and has helped fix things.

Brian: They've helped by teaching about the engineering design process and how subaquatic physics work. They supported us and helped us when we were frustrated and let us make mistakes.

Anna: They give us advice when we are struggling. They'll help, but mostly they leave it up to us to navigate the design process. They'll ask us questions to give us hints. 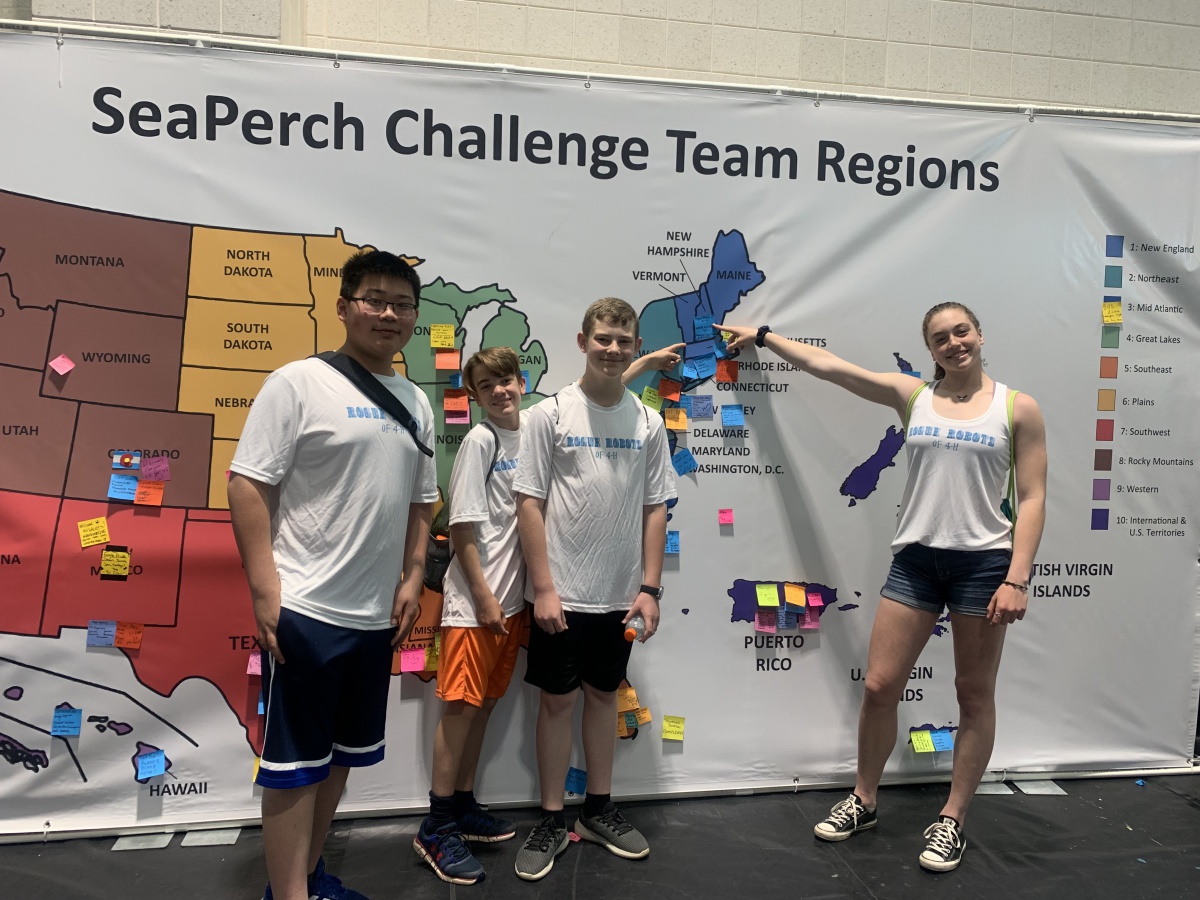 How'd they do? The Water Wizards ranked 41st out of 96 competing middle school teams. The team encountered some challenges at the competition that impacted the execution of some of the maneuvers, but their mentors Pam Numme and Jeff Proehl were extremely proud of the team's performance on a national stage. "Jeff and I are proud of them for not getting so upset that they shut down," said Numme. "They thought quickly on their feet in spite of the frustration and disappointment. They accomplished what they could.  That is real life problem solving."

Are you interested in getting involved in SeaPerch, robotics, mentoring or 4-H?

Get Involved in 4-H Today.