Part of the "A Walk in the Woods" Series
SHARE

“The woods are lovely, dark and deep” – Robert Frost, “Stopping by Woods on a Snowy Evening”

The poet could very well have been describing a stand of eastern hemlock when he wrote these famous words.  Eastern hemlock (Tsuga candensis), found from Michigan to the Canadian Maritimes, and from Maine to Georgia, is a common sight in New Hampshire’s forests. It is often found in nearly pure stands, with a closed canopy that casts deep shade. The understory of a mature hemlock stand is often void of understory plants, creating a deep woods, but park-like, feel.

The shade is an advantage for the hemlock; it is considered to be the most shade tolerant of tree species. Hemlock is so shade tolerant that it can persist in the understory, as a suppressed tree, for up to 400 years! It is not uncommon to see a one-inch diameter hemlock “sapling” that is sixty, eighty, or a hundred years old. This is a prime example of tree diameter not being equal to tree age. A 10 inch diameter hemlock was found to be 359 years old, while other trees of the same age were two to three feet in diameter.

Growing in the shade, hemlocks grow slowly, but can reach large diameters and heights. Hemlocks commonly reach two to four feet in diameter and 100 feet in height. One of the largest hemlocks is eighty-four inches (diameter, not circumference) and the maximum recorded height is 160 feet. These were likely trees growing in the southern part of the range, with longer growing seasons. For a slow-growing tree to reach these sizes, it must be a long-lived species. Eastern hemlocks can take 250 to 300 years to reach maturity, and can live more than 800 years. The oldest eastern hemlock on record is 988 years.

Slow-growing, shade tolerant, long-lived hemlocks have some exacting standards for conditions in which to regenerate.  Though they produce frequent cone crops, with good crops occurring two out of three years, the viability of the seeds is low. Most years the majority of the seeds are empty, or destroyed by insects. In addition, in order for the seeds that are viable to germinate, temperature and moisture conditions have to be just right. Optimally, soil temperatures will be a constant 59 degrees Fahrenheit, though germination is reliable from 44 to 64 degrees. Not only is the narrow temperature range needed, but this range needs to be maintained for 45-60 days for the seeds to reach “peak energy for germination”. Soil moisture is also very important to hemlock seeds, because they are easily dried out, resulting in loss of viability.

Though highly tolerant of shade, once hemlocks are well-established in the understory, they will respond well to release. When overstory trees are removed through cutting or windthrow, suppressed hemlocks will increase in height and diameter growth. 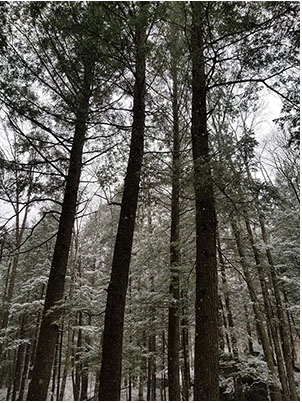 Besides growing in nearly pure stands, hemlock is also found closely associated with white pine, spruce and fir, yellow birch, red oak, and red maple. The species likes moist but well-drained soils, but can also grow on excessively drained sites. It is often associated with lower slopes and along streams and water courses, known as riparian areas.

Hemlock was an important species in the early days of the United States. Not for its lumber, but for its bark. High in tannins, hemlock bark was prized for treating animal hides to make leather in a process known as tanning. The role of the tannins is to bind collagen proteins together, so they are less susceptible to being decomposed, thus preserving the leather. Hemlock bark tannins give leather a dark red-brown shade, making it distinct from leather tanned with other species such as oak.

Tanneries were a major industry and employer throughout much of New England during the 1800s. Millions of hemlocks were felled and stripped of their bark. A very small amount of the lumber was used, but most of the downed trees were left to rot. Due to the depletion of the bark source, declining tolerance for the pollution created by tanneries, and economic factors, the leather tanning industry declined significantly by the early 1900s.

Despite the widespread destruction of old growth hemlock stands, hemlock as a species persisted and regenerated, to the point where it now represents 20-25 percent of the softwood timber inventory in the northeast.

Hemlock is now used mainly for lumber and pulpwood. The lumber is strong, holds nails well, and is easily worked when green. It is used for barns, outbuildings, timber frames, and is a popular choice for bridges on logging roads and trails. Demand, however, is limited for structural lumber compared to spruce and fir. Hemlock is difficult to nail when dry, and the green lumber is heavy.

Hemlock lumber yields are low compared to other softwood species because of ring shake, a situation where the wood separates along the growth rings. This renders the lumber worthless. Though the exact cause of ring shake isn’t clear, it is closely associated with tree age, sudden changes in diameter growth through a tree’s life, and bird peck scars.

Due to these factors, hemlock isn’t considered a valuable timber species. Demand is typically steady, but returns to landowners are much lower than white pine, spruce, or fir. A major value of hemlock is for wildlife habitat.

In areas where spruce and fir are less prevalent, hemlock stands provide important deer wintering habitat. Dense stands reduce snow depths and help to moderate temperatures. These factors are critical in helping deer conserve energy over the winter. As the climate changes, this may become less of a necessity, but in the northern parts of the whitetail deer’s range, it remains an important consideration.

Besides deer, 90 bird species and 50 mammal species use hemlock stands in New England. A number of songbird species focus on using hemlock stands during breeding season, and several species of owl are strongly associated with hemlock stands year-round. Hemlock regeneration supports snowshoe hare, which attract bobcat and fisher. Porcupine feed on hemlock bark and branches. This feeding can help deer in the winter. The branches that the porcupines chew off and fall to the ground provide a source of fresh food for deer. Red squirrels, a favorite food of goshawks, feed on hemlock cones.

Several insects attack hemlock. The most well-known is hemlock woolly adelgid (HWA), a tiny, non-native insect that feeds on hemlock twigs. It is recognized by a white, cotton-like substance that the insect exudes. Feeding by HWA reduces the ability of the tree to produce new twigs. An untreated infestation can kill a tree in 2 to 12 years. The insect is well-established in southern New Hampshire. The good news is that cold winters can keep the spread in check. In 2018, there was 98% mortality due to winter kill. Other insect pests of hemlock include elongate hemlock scale and hemlock borer.

More information can be found at www.nhbugs.org

Eastern hemlock has proven to be a resilient tree, able to persist despite intensive use, large scale land clearing, and insect threats. It is a useful lumber species, important for wildlife habitat, and a common sight in our forests. A changing climate may present the hemlock with additional challenges, but the tree should be a feature of our landscape well into the future.