For years I had been driving by a huge basswood tree next to the road by the Souhegan River and never noticed it because its canopy was so high overhead. It was also camouflaged by an ash growing right next to it. Both trees have similar tall, straight trunks and bark.

It was the strange seed pods on some young basswood trees nearby that captured my curiosity. I stopped to inspect. One tree led to another, and much to my astonishment I found a low branch with the huge, distinctive heart-shaped leaves dangling down from the huge basswood tree trunk.  Looking up I could see the basswood tree was even taller than the ash tree next to it.

Basswood, of the Linden family and also called linden, is a stately American forest tree with a high dense canopy and lower limbs that can droop to the ground. Its big heart-shaped overlapping leaves, with an interesting palmate vein design, are as big as grape leaves. Its unusual round seeds that dangle in clusters from the center of a pale finger–sized and shaped flap or bract, are noticeable in midsummer. These odd bracts actually have a function – they perform like twirling parachutes when they detach and fall to help disperse the seeds. 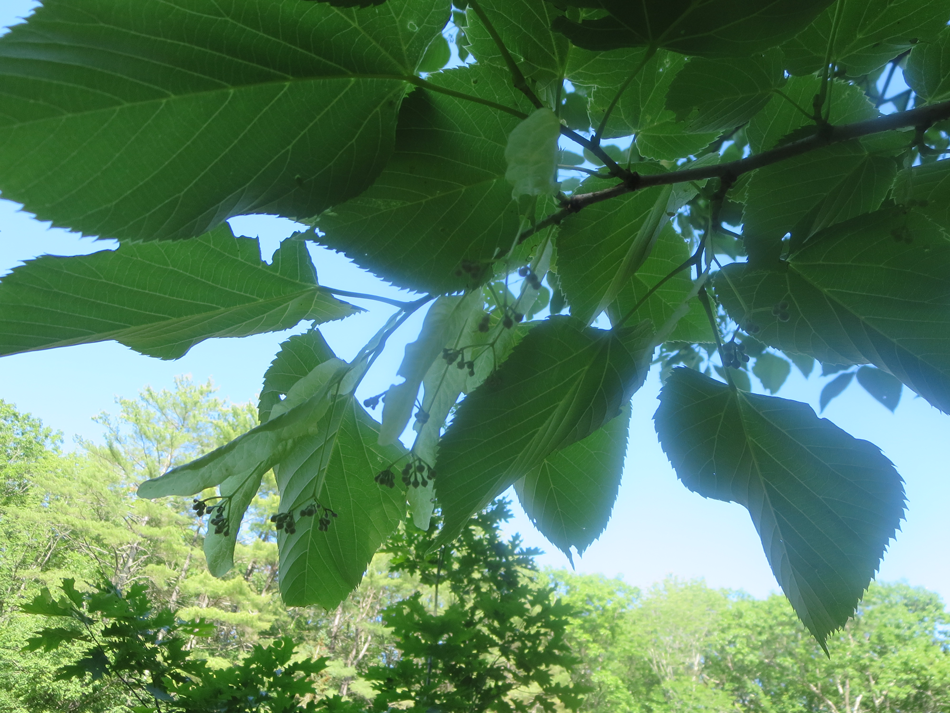 These huge trees were growing in a patch of vigorous poison ivy with thick vines growing up both trees. I would need help to measure them to find out if they might be Big Tree champions. I found a willing Big Tree Team measurer and we dressed for toxic duty. Wearing a protective hood to keep the huge, healthy poison ivy leaves from brushing my neck and hair, we got the tape measure around the big trunk of the basswood tree at the correct height of four-feet-six-inches, and measured its circumference (Circumference at Breast Height = CBH) at 123 inches around.

Using a clinometer, we measured the height at 115 feet, and using the official system of the American Forest Society, we measured the average crown spread. These three numbers were combined to give a total score of 252.

Curiously, unlike most forest trees that are wind pollinated, basswood produces very fragrant flowers. These pale yellow dangling flowers that open in July are hidden by the big leaves. But bees find them, attracted by the fragrance that can be detected from up to a mile away. They love the nectar. For this reason basswood is also called the “bee-tree” and the light-colored, exquisite tasting honey made during the three weeks that it blooms is considered one of the best quality honeys by some. The National Honey Board says, “Basswood honey is water-white with a good flavor. It has a fresh taste similar to green ripening fruit. It is characterized by its distinctive lingering flavor.”

Like many nut trees, significant flower and seed production occurs on a cycle of every three to four years, so the flowers, bees and honey production are also cyclical. A local beekeeper reported, “There was a modest amount of bee activity on basswoods this year, but it was not a heavy honey flow. I have only seen one year where the basswood flow was intense. The roar of the bees was audible 20-30 feet from the trees that year.”

The flowers produce a pea-sized fruit or nut that dangles from a stem in clusters from the odd samara. It is a smooth, round ball with a very hard woody shell that I could barely slice open with a knife. Inside are one or two seeds surrounded by some hollow space. The fresh green seeds float for awhile, another method of dispersal. They tend to hang on the tree all winter. Germination can take a few years because of the hard seed coat. The seed must be softened by rain and snow all winter or be scratched by rocks after falling. It’s viable for several years, which helps it overcome its difficulty to germinate and its cyclical production. It is hard to imagine any animal cracking open these hard seed shells, but chipmunks are said to eat them. 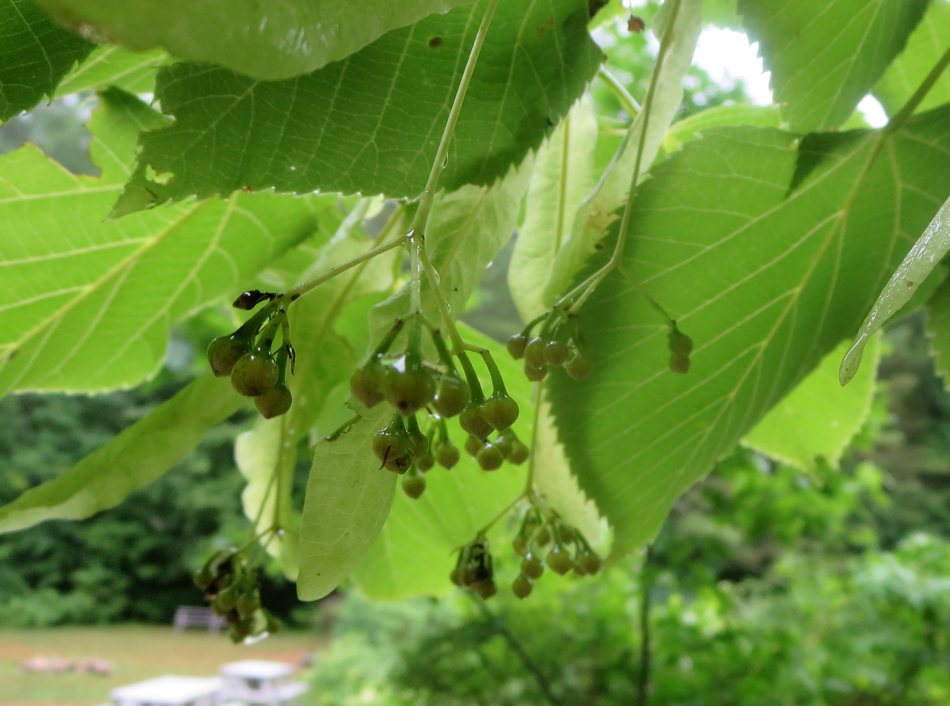 Young saplings grow in shade but the tree is less tolerant of shade as it matures. It likes deep soils so it grows along rivers or at the edges of fields where the soil is good and the roots can grow deep. I found lots of young basswood trees growing near the giant mother tree by the river. It also sprouts from stumps, so is often found growing in clumps.

Because of the light weight of this hardwood tree and its clean, pale color, it is perfect for making great lightweight food containers - berry and fruit baskets. A wonderful article that appeared in the New York Times on November 27, 1898, describes the manufacture of these new, handy wood products. The throw-away concept was born with the invention of the lumber ‘slicer’ in the 1880s. This marvelous piece of machinery enables logs to be sliced into very thin peels of wood. A big advantage of this new machine was that it eliminated the sawdust problem, no sawdust waste, nor sawdust polluting the air or creating a fire hazard.

The author of the article traveled to Maine over the summer and visited water-powered mills that manufactured these inexpensive containers: wooden butter boxes, wood disks to put under pies and bakery goods, berry and grape boxes, peach and orange crates and other food containers.

These items appeared during the 1880s. The author noted that just 10 years before (1888), throw-away food packaging supplies didn’t exist and packing crates and boxes were returned for reuse, creating a logistics problem.

The invention of veneer machinery enabled low-grade wood to be turned into these handy containers. The logs were soaked or boiled for 24 hours, making the wood soft and pliable. To cut the slices, the rotating log moved toward the knife that is the same length as the log.  It sliced it into ribbons of thin wood, then cut to the size for the product. A stapling machine enabled quick fabrication, and one mill girl could make between 2,000-3,000 berry boxes a day and earn 85 cents per thousand.

The author reported that back then, 200 million berry baskets were sold annually, the same quantity of butter dishes, 100 million peach baskets and pie dishes, using thousands of cords of wood annually, equal to a good-sized forest. These thin wood containers were so cheap there was virtually no cost to the consumer: “We burn them in the fire without thinking of their cost.” With the rising popularity of farmer’s markets these attractive old-fashioned berry baskets are making a comeback – I got some new ones this year that I am not going to throw in the fire.

It’s easy to see why basswood trees are uncommon today. They need good deep soil, rare in New England. A century ago, when found they were cut down to feed the slicing machine to make throw-away containers. Obviously, these containers weren’t a sustainable product as the wood became more difficult to find, as did the mill girls making the boxes and crates. But it was not only the clever manufacturers who used up basswood trees. Before the arrival of the Colonists, Native Americans discovered the tough fibrous inner bark of basswood trees could be used to make thread, rope and splints for baskets and mats.

An article by Edgar Anderson in the Bulletin of Harvard University Arnold Arboretum, May 26, 1933, tells about “Basswood Bark and its Uses by the Indians.”  The article explains how the bark was cut from the trees – often a limb or root sprout would provide enough material for a need. The author describes in specific detail how to make twisted twine or fine sewing thread, including the trick of splicing strands of fiber together by rolling the strands on one’s thigh. The bark can be taken from the tree at any time of the year, although it slips off most easily in the spring. After being stripped from the tree trunk, the bark was soaked under water (retting) for about a month so the soft tissue could rot away leaving the fibers. Wider strips are cut for mats and baskets.

Basswood has been employed for many unique uses because of the even color and grain, light weight and ease of carving, from yardsticks to ship figure heads, cigar store Indians, decoys, gunnels in canoes, and model making.