The Magic of Sugar Maple 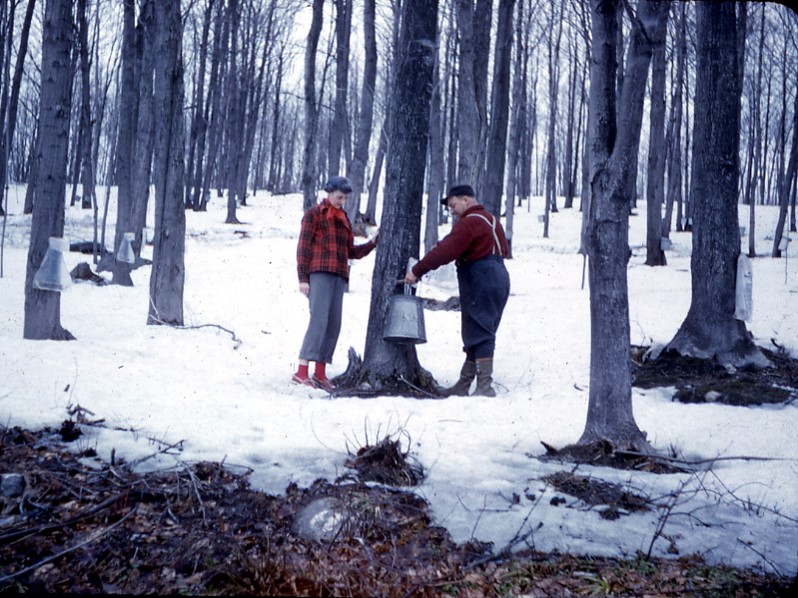 In late winter, the familiar metal buckets begin appearing on maple trees all over New Hampshire. It’s maple sugaring season! Sugaring is a classic New England tradition that has, for generations, served to define the character of the land and people here. When we see these trees adorned with buckets on crisp sunny days in the spring, it’s easy to reminisce about what life might have been like in simpler times. It brings to mind images of a Currier and Ives lithograph of New England life long ago - images of families working together to bring in the sap and boil it down in their sugarhouses as steam billows forth and cheerful conversations pass the time around the wood fire.

New Hampshire is blessed with an abundance of sugar maples. In addition to giving us maple sugar, our maples provide a striking display of orange, yellow and scarlet foliage every fall. Sugar maple wood is light in color and extremely hard and durable (one of the common names for this tree species is “rock maple”, and it’s wood is often referred to as hard maple). Hard maple lumber is used for a variety of products including flooring, furniture and cabinets. A small portion of our maple trees also produce the interesting grain patterns called “curly” and “birds eye” that are so valued by woodworkers.

Classic New England Tradition
Nowadays we may see plastic tubing running through the woods to bring in the sap instead of buckets. This is just one of the modern efficiencies that have been incorporated into this age old ritual. While technologies have changed to improve the efficiency of sugaring, the quality of the product remains the same if not better.

Sap from maple trees (sugar maple, along with red maple and silver maple can all be tapped for sugaring) is primarily water, along with some minerals, and has an average sugar content of 2.2%. Large volumes of water must be boiled off to concentrate the sugar and minerals and produce maple syrup, which has a sugar content of 67%. During the process of evaporation heat causes chemical reactions in the concentrated sap resulting in the characteristic flavor we know as maple syrup. The color and flavor of maple syrup is determined by the freshness of the sap and the speed of boiling.

Maple syrup is graded by color, flavor, and clarity. Syrups will either be graded as Golden, Amber, Dark, or Very Dark. Golden maple syrup is "light" in color with a delicate flavor and requires considerable skill to make. It is usually made from the earlier "runs" when the sugar content is highest and daytime temperatures keep the sap cool. Amber has a richer flavor, while Dark and Very Dark are very strong or rubust and are popular for cooking. Pure maple syrup contains no additives or preservatives.

On average, you need 40 gallons of sap to produce one gallon of maple syrup.

History of Sugaring
The tradition of sugaring dates back to before European settlers. Maple sugar was an important part of the diet of Native Americans in this region. Native Americans heated sap to syrup and ultimately into a solid sugar form by placing hot stones into hollowed out logs and bark containers filled with sap. According to Elizabeth Gemming in Maple Harvest, the syrup was boiled until it was nearly dry and was then either poured into molds to form “cake sugar” or “block sugar” or was stirred to create a grainy “stirred sugar.” Syrup was also poured onto snow to create “wax sugar” which was a smooth, taffy like product. These solid forms of sugar were easier to store and transport than liquid syrup.

Maple sugar was important to early settlers in New England as well. According to James Lawrence and Rux Martin in their book, Sweet Maple, around the time of the American Revolution maple sugar was touted as a patriotic and “moral” alternative to sugar cane produced by slaves in the British-controlled West Indies. Maple sugar continued to be an important flavoring until the 1880’s when sugar cane became less expensive than maple sugar. Even then, it remained an important crop for farm families.

Hollowed out logs and hot stones were replaced by metal kettles, and kettles have since been replaced in modern sugarhouses by flat bottomed evaporators. Methods of collecting sap and processing sap into syrup have become much more sophisticated.

Sugar maple trees can live to be 300 to 400 years old. Trees can be tapped when the trunk reaches 12” in diameter (around 50 years old). Using conservative tapping guidelines, trees can continue to be tapped and provide sap for hundreds of years.

Sap Flow
Throughout the summer, tree leaves are capturing sunlight, and using it to create sugars. Some of these sugars are used during the growing season and some are stored over the winter to help the tree start growing again in the spring. It is this flow of stored sugar that maple producers tap into when temperature conditions are right. To get a good sap run we need a combination of cold nights (in the 20’s) and warm days (in the 40’s) to create pressure imbalances within the tree and get the sap moving. Maples have some rather unique characteristics that allow for this sap flow process. Sap will run whenever these temperature differences occur, but the largest and most consistent sap flow occurs in late spring. Our sugaring season can begin in late February and run into early April often stopping several times in between.

Try Your Hand at Backyard Sugaring
If you have maple trees on your property, you may want to try your hand at tapping a few and boiling down the sap for a family treat. Maple trees are identified by their three to five lobed leaves (think of the leaf on the Canadian flag). In the winter, look for trees with an opposite branching pattern. Consult tree identification guides for additional characteristics to help you identify your trees.

A single taphole can yield 10 gallons of sap over the season. With an average sugar content, this will boil down to approximately one quart of syrup.

Stop by a Local Sugarhouse
The maple sugaring season is a wonderful part of our rural heritage. Stop by a local sugar house that welcomes visitors--the sweet steam coming out the roof vent is your invitation to go in and visit. Even on chilly nights when the sap is being boiled, the evaporator provides warmth with the pleasant aroma of maple syrup in the brisk night air.

To find a sugarhouse to visit or to purchase maple products, contact the N.H. Maple Producers Association.

Maple syrup is a great locally produced product made by your neighbors. Check out one of the many products that can be sustainably derived from our local forests.