Mike Skelton, executive director of the Greater Manchester Chamber of Commerce, opened this year's Economic Development Academy (EDA) with a reminder to the 28 participants from all over New England: Manchester has continually reinvented itself in order to sustain and grow its economy. Innovation and resilience have been a central theme at this year's EDA — the ability for people to rally around a common vision and leverage local assets to drive economic innovation. In Manchester’s case, the mighty Merrimack River was the primary asset that helped put the Queen City on the map.

Starting in the early 1800s, a group of visionaries led by Ben Prichard borrowed from the innovations happening in England to launch the city's first textile mill that harnessed the power of the Merrimack, similar to the mills in nearby Lowell and Lawrence, Mass. But even Prichard could not have predicted how big the textile industry would grow on the east bank of the Merrimack. By the late 1800s, the bustling Amoskeag Mills occupied nearly 10 million square-feet of space along Commercial Street in Manchester. Though the footprint of the mills is barely 40 percent of what it once was, the mile-long strip of massive mill buildings is still an impressive sight.

Manchester is a city that was built upon its natural capital — the power of the river. And it is a city that leveraged innovation to become one of the most powerful economic drivers in the Northeast by the turn of the last century. John Clayton, executive director of the Manchester Historic Association, reinforced Skelton's message that innovation helped build the city’s foundation and the state's economy, in spite of a few “bumps and challenges.”

Life at the mills was incredibly difficult for women and young children in particular, as they constituted the vast majority of the workforce. What began as economic opportunity for many turned into exploitation by the early 1900s, as competition from other textile manufacturers increased. The financial bottom dropped out from under the Amoskeag mills by the 1930s due to competition and the effects of the Great Depression. The flood of 1936 was the last straw: the mighty Merrimack leaped its banks and flooded the entire mill district, effectively rendering it bankrupt.

“But one must never underestimate the power of local people,” Clayton noted. In 1936, a group of local investors raised $5 million in just over a week to purchase the mills from federal bankruptcy court proceedings. Just when everyone thought the mills were dead, they took on a new life. The mills slowly were adapted to new uses, including modern textile production. The mill district was nowhere near the size that it was in its heyday, but it remained part of the city's economic lifeblood.

By the 1960s and 1970s, competition and the changing economy once again crimped the manufacturing sector, as did disinvestment in the city. During this period, industry went on a rapid downward trajectory and vast tracts of mills were demolished, with the hope that new structures would take their place. Unfortunately, this anticipated redevelopment lagged for decades. It has been only in the last decade or so that a new generation of industry has begun to occupy the mill complex. Companies like Dyn — one of the largest domain servers in the world — Autodesk, and Deka, Dean Kamen’s company that created the Segway, are fixtures in the mills.

One must never underestimate the power of local people.

While textiles drove the mills’ first boom years, STEM-based businesses and efforts are driving the current renaissance. One of the most innovative companies currently in the mills is PillPack, the Amazon of pharmacies, which is projected to be the next billion-dollar company. UNH Manchester and Deka are collaborating on the Advanced Regenerative Manufacturing Institute (ARMI), a U.S. Department of Defense-funded project that will lead national education and workforce development in organ and tissue regeneration research. According to Skelton, innovation like this has helped Manchester constantly reinvent itself, along with the support of municipal leaders, businesses and organizations.

“Aside from innovation, the main reason why Manchester has thrived is because of how local leadership has galvanized around a common vision and has worked together across sectors,” Skelton noted. Other initiatives, such as Manchester Connects, a partnership between the city, the Chamber of Commerce and other groups to identify cultural and economic development opportunities, also help keep Manchester growing. 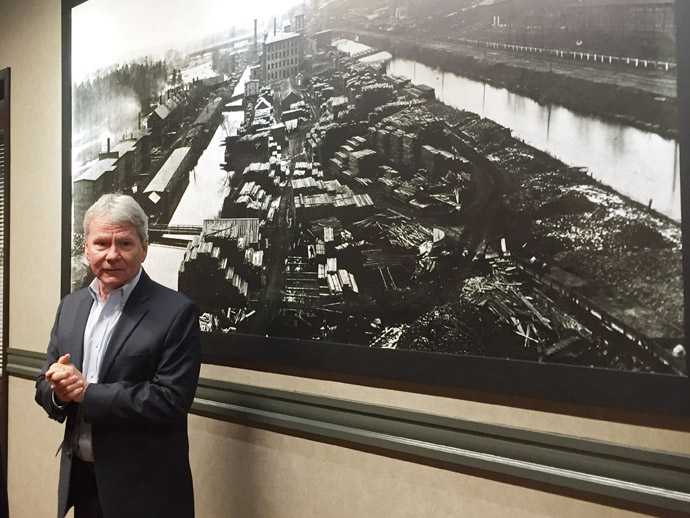 That is not to say that Manchester doesn't have its challenges, as does any post-industrial city in transition, but rather, people are willing to collaborate to find common solutions. One challenge local employers and statewide partners need to tackle is the opioid crisis, which has hit the state hard. The biggest impact to employers is their ability to retain workers who wash out, often after having received months of specialized training. “We need to look to creative solutions to tackle this problem,” said Skelton, adding that high-tech manufacturing companies like Hypertherm are finding creative solutions to this challenge.

The 28 participants of this year’s Economic Development Academy hail from New Hampshire communities such as Dover, Newport, Berlin, Concord and Nashua, as well as from locales throughout the region, including Boston, Pittsfield, Mass., and communities in Maine. Attendees are learning how cities like Manchester have used innovation and collaboration to reinvent themselves, and, most importantly, learning from each other.

According to participant Reid Weston of Dover, “The solution for one town is different from that of another. That said, we see the power of the Cocheco River in Dover as a driver of renewal.” Dover is planning for a new mixed-use development along the river to bring people into the downtown and help support local businesses. The city is also focusing on connecting its infrastructure and natural assets to make the town more vibrant, including better linking trails and walkways to the downtown. It’s another example of how a little innovation can go a long way towards reinventing a community.