When to harvest, and how to feed it
SHARE

Harvesting corn silage and optimizing its use this year will be critical to profitability. The objective of this article is to describe the fermentation process from chopping to feedout of corn silage and how to maximize its use in dairy cattle rations.

Corn should be harvested for silage at about 30-35% dry matter; harvesting when it’s too wet will result in nutrient losses, and harvesting when it’s too dry leaves you with hard-to-digest kernels and too little moisture for fermentation. Looking for milk line to progress 2/3 to ½ of the way down the kernel can give you a general idea of when to start chopping, but the correlation between kernel development and whole-plant moisture content in today’s hybrids is pretty poor. A much better way to determine dry matter content is to measure it yourself. A Koster tester works pretty well, but you can get equally results drying down the sample in a paper bag in a microwave and weighing it on a kitchen scale

For reference, the ear in the photo below is at approximately ½ milk line, indicated by the arrow. 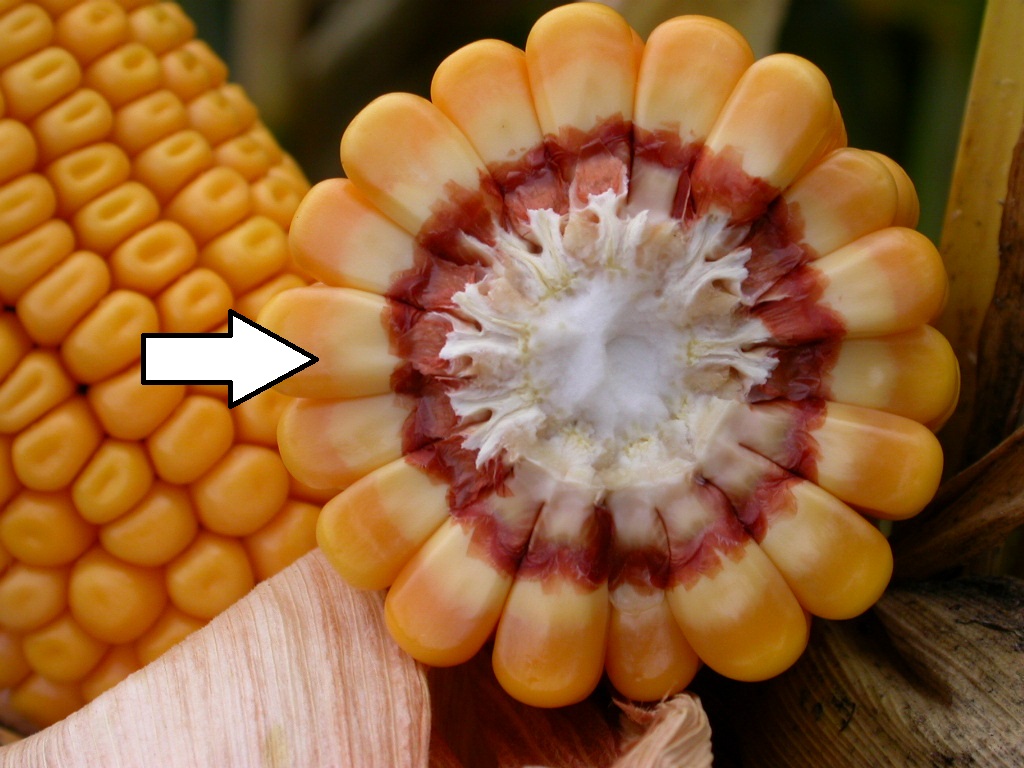 Chopping Many farms chop at a height of approximately 12 inches. In certain cases, it may be better to chop higher; in a good year, leaving the least-nutritious portion of the stalk can improve the feed value of your silage without affecting yields, and in droughty years it's an important way to reduce the risk of nitrate toxicity. Particles of chopped corn need to be small enough to pack effectively, but have at least a portion of larger particles to provide effective fiber; set your chopper at 3/8 inch theoretical length of cut in order to provide about 50% one-inch particles.  Many farms have found kernel processors to be a worthwhile investment; they crack open kernels to expose fermentable starches that in turn help to ensure good fermentation that drops the pH rapidly and prevents spoilage and mold. Ordinarily, there are enough starches and sugars that a silage inoculant containing lactic acid bacteria isn’t necessary, but they can be helpful for those years where the corn is more mature than you’d like.

Silage fermentation happens in the absence of oxygen, and it’s important to take care to exclude as much air as possible. Packing should be done using wheeled tractors or pay loaders, not track implements.  Pack the chopped corn in thin (6 inch) layers, and use the “800 Rule” to determine how quickly you should be filling the bunker:

If your packing tractor weighs 12,000pounds, then that means you can fill the bunker at a rate of 15 tons per hour. If you’re filling the silo faster than that, you need to get either another tractor to help keep up, or use a bigger tractor. And regardless of how many tractors you have up there, be safe and take extra care when you’re packing close to the sides.

To reduce spoilage due to exposure to oxygen bunker silos should be covered with plastic enough to cover over the sidewalls of the bunker.  To optimize feedout and reduce shrink it is essential to understand oxygen is your enemy, and that you need to cover and seal the silo as quickly as possible.There are some other things you can do for additional protection; based on research from UNH, we recommend adding plain white salt (not iodized) on the top of the bunker at a rate of 50 pounds per 400 square feet prior to covering is very effective at reducing spoilage. Consider using a commercially available clear plastic covering that adheres to the pile.  Several New Hampshire producers use this product and find it virtually eliminates any spoilage.  The last covering should be opaque plastic that is weighed down, weighted down with either tire sidewalls or tube sand.  Tire sidewalls should touch each other. All of these management techniques are to reduce oxygen from spoiling the feed.  I always tell my class “The difference between silage and compost is air”.

After you have spent all this money on this expensive corn, inoculated it with an expensive inoculant, spread salt on it, covered it with two layers of plastic and covered them with tire sidewalls, all is forsaken if you do not feed out correctly.  Bunker silo width is critical for correct feeding.  Silage needs to be removed at a minimum of six inches off the face each day.  If less is removed, oxygen will begin to penetrate and deteriorate the silage.  It has been my observation that many bunkers are too wide; more narrow bunkers would minimize the exposure to air and the risk of spoiling.  The other issue I see is parallel cuts in the bunker essentially resulting in two faces.  This also results in more exposure for oxygen to deteriorate corn silage.  I have figures depicting the heating of bunkers due to access by oxygen.  Heating results in spoilage.

The best tool by far for removing silage is a defacer.  Many producers have told me that it is one of the best investments they have made.  The defacer keeps and even face.  The more even the face the less nooks and crannies for oxygen to penetrate and cause undue heating.

If you do not have a defacer, you can use a front end loader to remove silage.  First, go across the bottom of the bunker and dig out a scoop worth of silage and then using the edge of the bucket drag the face of the silage down filling the opening in the bottom, keep going across the face evenly.  It is advisable not to have the bunker taller than the reach of the tractor bucket as overhangs can form and fall on top of the tractor resulting in injury.  I recommend that the tractor used for this purpose have a cab to lend some protection against overhangs.

Only remove the desired amount of silage based on the ration daily. Because there’s a risk of some spoilage and mold and hence poisoning from mycotoxins even when you strive to do everything correctly, I suggest that all cows be fed a mycotoxin binder as insurance against any spoilage that can occur from the silage.  Cows consuming mycotoxins often have poor yields and possible failure to breed or abortion. Because silage can become contaminated with soil, we also recommend vaccinating against Clostridium perfringens, which can otherwise cause serious illness or even death in cattle.

Taking care to harvest at the right time, pack the silo properly, keep the bunker covered, and maintaining a fresh silo face will pay dividends, making the best use of your corn silage.