Things to Do in the Woodlot While Waiting for Spring
SHARE

March can be a tough time of year in northern New England. After months of bundling up, putting on snowshoes or skis, and dealing with cold temperatures and snow, many of us are starting to look forward to warmer days, sunshine, and colors besides white, grey, brown, and dark conifer green. Many years, and this one is no exception, we get some warm weather and snowmelt and a glimpse of bare ground long before winter is actually ready to give up the ghost.

One of the toughest things about winter is the long stretches of grey, gloomy skies. Clear, sunny, cold, blue sky days are some of the best all year, but they are much too infrequent. So instead of waiting for the sun to shine or waiting for warm temperatures, I have several things I like to do in my small patch of woods to help make the long transition from winter to spring much more enjoyable.

One thing that helps pass the time waiting for spring is the age-old tradition of tapping maple trees. Our property, like most rural properties, was once part of a farm. Part of it is occupied with trees that grew in after agricultural uses were abandoned about thirty years ago. Most of the maples are not large enough to tap, but we’re lucky enough to have some that are (10” diameter and up), twenty-four in all.

Maple sugaring is like most hobbies – you can spend a lot of money if you’re not careful. Twenty-four taps makes boiling the sap into syrup a bit of a challenge. There are many ways to boil sap, but when dealing with a small volume the choices are either a) use up a lot of firewood or propane (we’ve tried each) or b) are expensive (it’s hard to justify buying an evaporator for twenty-four taps), or both. This year I’m bringing our sap to a friend’s sugarhouse, to be boiled in his evaporator. 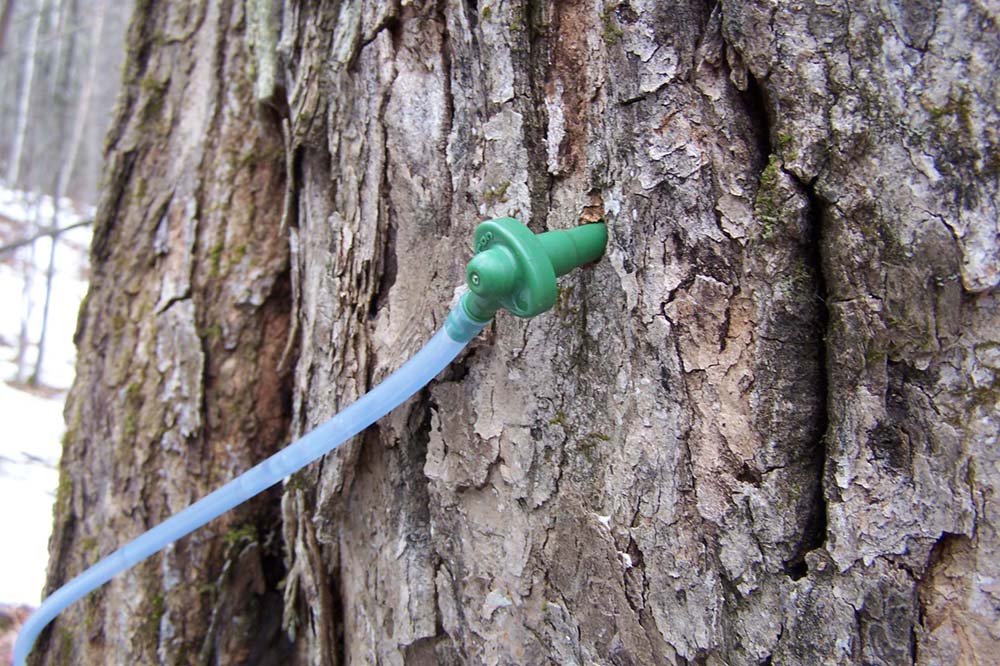 A well-known feeling among sugarmakers is that it’s hard to not tap trees every spring once you’ve started doing it. You look forward to the following spring and think about tapping more trees, and if you don’t have any more to tap on your own land, you think about other people’s land. You think, “Who has trees I can tap?” On our land, while we don’t have many tappable sized maples, we do have plenty of maple saplings. I’ve been thinning out these trees so the remaining ones will have room to expand their crowns. The larger the crown, the more sap produced. These trees are 1 to 3 inches in diameter, so it will be a long time before we can tap them, if ever. But someone will. And thinning trees is just something that foresters do. We can’t help it. We see a stand of overcrowded trees, and the urge to thin it is strong. I recently read a great quote that said something like “in a prosperous society, people plant trees under whose shade they’ll never sit.” Well, foresters thin stands of trees whose sap they’ll never gather or whose logs they’ll never harvest. After thinning, the trees will grow to tapping size sooner, and we’ll use some of the cut trees for bean poles and trellises in the garden and for firewood.

Releasing and pruning apple trees is another great way to spend late winter days, waiting for spring. Plenty has been written about the technical, how-to aspects of apple tree release and pruning. But nothing I’ve read captures what it’s actually like to prune apple trees, especially ones that are a bit overtopped by other trees in the woods, and haven’t been pruned in a long time; trees that have grown wild. The first thing that comes to mind is the word “daunting”. The release work is easy enough – identify which trees are shading out or crowding your apple tree, and fell those trees. Pruning a heavily overgrown tree, however, is a different story. First of all, where do you start? There are so many branches, growing every which way. The basic concepts are straight forward – prune off the dead wood first, prune off water sprouts, eliminate crossing branches, favor horizontal branches. Increase sunlight and airflow throughout the crown. But which branches to cut and which to leave? If you home in on the individual branches, you’ll be tied in a knot of indecision. The key is to keep the end goal in mind:  increase sunlight and airflow.

An apple tree’s branches grow every which way, and there are a lot of stiff, spike-like limbs on them. They can be difficult to get out of the tree, they grab your clothes, and they don’t pile up neatly. If you expect to prune a tree quickly, you’ll be disappointed. Instead of fighting with the tree, trying to get the pruning done quickly, I’ve learned to slow down and carefully asses the tree. Not only which cuts to make, but how to make them and in what order. This branch needs to be pruned, but instead of pruning it now, maybe it will fall to the ground more easily if I wait until I’ve pruned some other branches. Occasionally, I step back to judge progress and decide what needs pruning next. Always keep the outcome in mind: increase sunlight and airflow to the crown, and base decisions on accomplishing that. Take your time, because otherwise you’ll end up doing more work than necessary, and not enjoy it as much.

In addition to opening up the crown to improve sunlight and airflow, I also prune tall branches. If we can’t reach to harvest apples, I’ll lower the crown by removing the upper branches. I might leave a few taller branches to provide apples for wildlife. Or I leave the trees with sour, bitter apples for the critters, and prune the trees with better tasting apples to a height where we can harvest them.

There is no single right way to do it, and fortunately apple trees are quite forgiving. We can prune the heck out of them and they’ll still survive, and often times thrive as a result. But I’m not saying to go out and give your apple trees a severe haircut. Better to do the opposite – start light, then gradually prune more. Prune the dead wood the first season, then prune live branches the following year. Like most things in the woods, it doesn’t pay to rush.

I like to use what I cut if possible. I save larger branches for the smoker. Apple wood is a favored wood for smoking meats, as are most fruit woods. The rest can be chipped up or at least removed from around the trees.

A Way to Get to Know Your Trees

I sometimes lament that I don’t have enough land – I’d like more trees to tap, more acres of future sawtimber, more land to harvest firewood. But having a very small parcel allows me to get to know each tree that I’m keeping for the future. I get to know each sugar maple I tap, because I see them every spring multiple times when tapping, collecting sap, and removing taps. I get to know each apple tree that I prune, then harvest apples from. I get to know each area where I’m thinning trees for better growth. While I’m busy pruning apple trees, tapping maples, and thinning the woods, before I know it the days are warmer and the snow is gone, and another spring has arrived.