The Year of the Gray Squirrel

While fishing on Goose Pond with my Dad this summer, we saw something swimming out in the open water. It was long, and gray in color. My first thought was a loon, which we’d been hearing, but it was too low on the water, and too light in color. And it was too long to be a duck. It wasn’t until we got fairly close that we realized what it was – a gray squirrel! 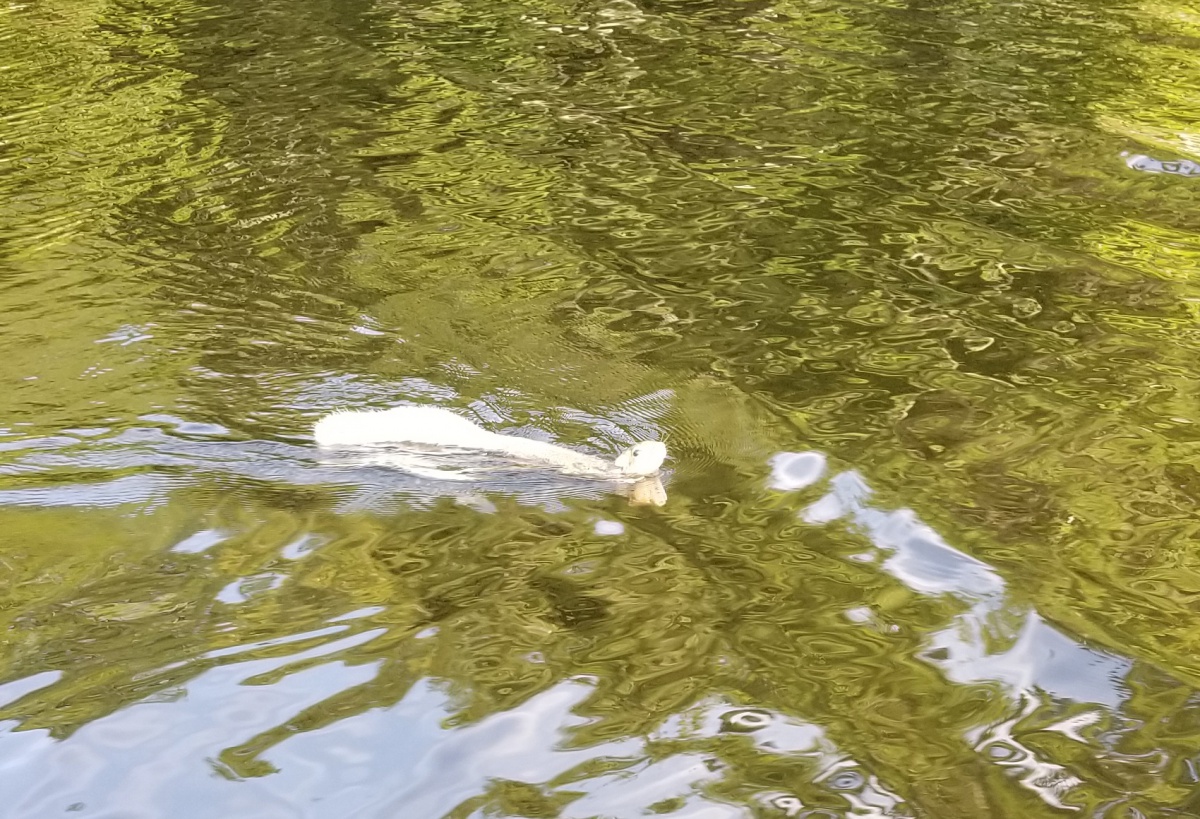 The eastern gray squirrel, Sciurus carolinensis, is native to the deciduous forests of the eastern half of North America. It’s the second largest species of tree squirrel, second to the fox squirrel, which is more common in Appalachian and Midwestern states. The gray is the species we’re familiar with in New England. The red squirrel is also found here, mostly in conifer-dominated woods like the spruce-fir forests of northern New Hampshire.

The gray squirrel, as the name implies, is mostly gray in color, with dark flecks that give it a somewhat peppery appearance. The squirrel’s face has reddish brown fur, and the belly is white. There is also a melanistic form, which is all black. This color phase is common in southeastern Canada, and I’ve seen them in Ohio.

Probably the most distinguishing characteristic of the gray squirrel is the large, bushy tail, which gives it the nicknames bannertail and bushytail. The gray squirrel probably gave rise to the term “bright-eyed and bushytailed” to describe someone who is wide awake and full of energy. The squirrel’s tail can be the same length as the body. The head and body range from 9 to 12 inches, and the tail is 7 ½ to 10 inches long. The gray squirrel’s genus name, Sciurus, is based on the Greek skia, meaning shadow, and oura, tail, and refers to the squirrel “sitting in the shadow of its tail”.

Squirrels are members of the rodent family, but are less prolific than most rodents, though you wouldn’t know it this year. Squirrels can breed twice per year, with the first breeding period around January and February and the second in May and June. The gestation period lasts approximately six weeks, with the first litter born in February and March, and the second litter in June or July. Each litter has one to four young and sometimes as many as eight.

Gray squirrels are known as scatter-hoarders – they collect and store food in many small caches, or hoards. One squirrel can make several thousand caches, and this behavior plays an important role in oak seedling germination. During most years, the majority of acorns are eaten by squirrels, other rodents, birds, and insects. The few buried acorns that the squirrels forgot, germinate into oak seedlings. 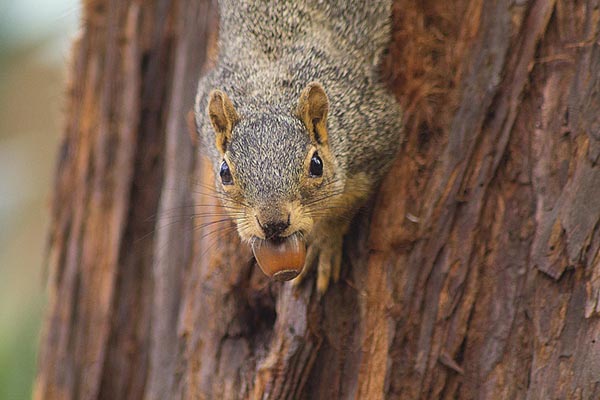 Gray squirrels build nests, called dreys, in the branches of trees. These are made of dry leaves and twigs, and are lined with moss, grass, and feathers. Dreys are used by females as nurseries and places to avoid predators. Squirrels also use tree cavities for the same purposes.

The eastern gray squirrel prefers mature hardwood forests with an abundance of oaks, and further south, hickory. In addition to acorns and hickory nuts, squirrels eat beechnuts, hazelnuts, apples, crabapples, mushrooms, and agricultural crops. This year, acorns are scarce in most places so squirrels are raiding corn fields and gardens. And perhaps surprisingly, squirrels also prey on bird eggs, young birds, and insects.

Why are there a huge numbers of gray squirrels this year, with many of them ending up as roadkill? There was an enormous acorn crop last year, as well as an abundance of other seeds, apples, and other foods. Well-fed female squirrels probably gave birth to two large litters. Perhaps the populations of squirrel predators were down, resulting in high survival rates for young squirrels. This year, with reduced availability of acorns and other foods, large numbers of squirrels are roaming the landscape - and crossing roads - looking for food to eat and store for winter.

While last year food for squirrels was exceptionally abundant, this year’s high squirrel and rodent population represents an abundant food source for predators – hawks, owls, fisher, weasel, fox, coyote, and bobcat. On a recent walk, I saw a chipmunk, a squirrel, a hawk, and an owl. All within twenty minutes. So I suspect that we’ll start seeing a lot more predators around. I imagine the crow population will increase too, with all the roadkill for them to eat. Eventually, the predators will start to reduce the number of squirrels and other rodents, and after that the predator numbers will start to decline. Until the next abundant food year, when the cycle starts again.

Fluctuations in wildlife populations are completely normal. The number of squirrels we’re seeing now is not sustainable. While no one likes to see dead animals littering the roads, these “surplus” squirrels would die of other causes such as predation, parasites, or disease. As predator numbers rise, squirrel and rodent numbers will decrease, and then the predator numbers will decline after. There’s a classic graph shown in biology texts where two curves – one representing prey species, and the other representing predators - that look like waves following each other. The prey species numbers rise and then fall, followed by the predator numbers. Of course this greatly simplifies the situation – lots of factors come into play, including fluctuations in food sources, predators, parasites, other mortality factors, weather, and habitat.

The best way to ensure healthy, resilient wildlife populations, even though they may fluctuate, is to provide a variety of quality habitat. In the case of gray squirrels, providing stands of mature oak trees, including trees with cavities, will ensure their presence on the landscape.