Part of the "A Walk in the Woods" Series
SHARE

Beech-Nut brand gum. “Beechwood aged” beer. Initials carved for eternity in beech bark. With its smooth, tight gray bark and crop of beech nuts, the American beech, Fagus grandifolia, is an iconic tree. A mature, healthy beech tree has a large spreading crown and dominates the trees around it, and plays an important role in the ecology of the New England forest.

The American beech is found in eastern North America from Nova Scotia to Maine, to northern Michigan and eastern Wisconsin, and as far south as eastern Texas and north Florida.

In New England, it grows in close association with sugar maple, yellow birch, and oak.  Beech, like many hardwoods, does best on moist but well-drained, fertile soils. It can also grow well on drier soils, and lower fertility soils than sugar maple. It is often found on dry ridges with oak, or by itself in northern New Hampshire where oak fades from the scene.

Beech is a very shade tolerant tree, which means it can germinate and survive in the understory shade. It will grow in the understory for decades, waiting for an opening in the canopy created by the removal of other trees. Beech is also a prolific sprouter, sending up many saplings from the roots of a stressed or damaged tree, and from both the stump and roots of a cut tree.

The beech’s shade tolerance and its sprouting abilities, combined with beech bark disease, make the beech a rather despised tree these days among foresters. Beech bark disease is an insect and fungi complex that has been in North America for nearly 130 years, having arrived here from Europe around 1890. It involves a tiny sap-sucking insect known as beech scale, and a fungus, Nectria. The beech scale feeds on the tree, creating wounds through which the Nectria fungus can enter the tree. The fungus kills sections of the bark, stopping sap flow, which can eventually lead to the death of the tree. When the tree is dying, the roots send up numerous sprouts from the roots. (Harvesting of beech trees also stimulates root sprouting.)

Partial cutting of forest stands, where some trees are harvested and many are left standing, can perpetuate a monoculture of beech in the understory. Because beech is shade tolerant and sprouts proliferate from the roots, shade from the remaining trees creates perfect conditions for dense stands of beech sprouts. In these shady conditions, other shade tolerant species can be found, such as hemlock and spruce. These species, however, germinate from seed, so only one tree can develop from each seed. The beech has a huge advantage because it can put up hundreds of sprouts from the root system of one tree, leading to the near-monoculture conditions.

These characteristics lead to the unpopularity of beech among foresters. Beech is a low value tree in terms of timber. The lumber can be challenging to dry, and there isn’t a huge market demand for it, in comparison to other hardwoods such as oak, maple, or birch. That said, the wood is used for furniture, flooring, pallet stock, and railroad ties. There used to be a strong market for clothespins made from beech. It is also used for speeding up the process of aging beer, made famous by a well-known brewery.

A low value tree that dominates the regeneration is of concern for several reasons. If the regeneration is dominated by a low value species, then the future forest will be of low value. A low value forest, with low financial returns, can lead to a landowner converting the forest to other uses such as house lots. A monoculture of regeneration is also less diverse ecologically, resulting in fewer wildlife species, and a less diverse future forest. Studies have shown that beech leaves are among the least desirable substrates for birds to forage for caterpillars (they really like yellow birch), and beech is not a preferred browse for deer or moose. In addition, most beech are susceptible to some degree to beech bark disease, therefore, it is desirable to have a greater diversity of tree species in the woods. 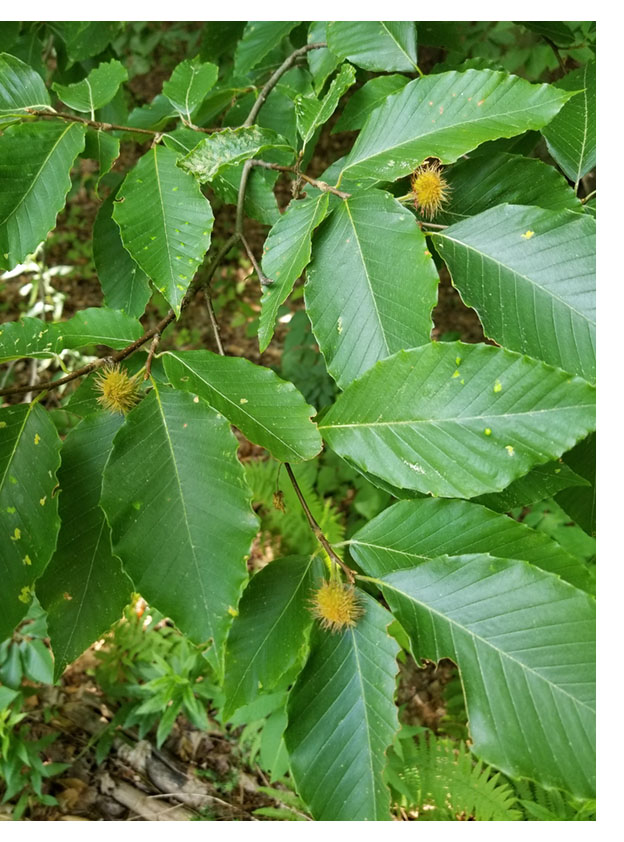 Though not popular with many foresters, beech is very popular with many wildlife species.  Large mature beech trees can form long-lasting cavities that are used by raccoons, bears, birds, and more. Among the hardwoods, beech lasts the longest after it is dead, with the exception of sugar maple. This results in snags that last a long time, providing long-term habitat.

Beech nuts are high in protein and fat, making them a very important food source for deer, squirrels, chipmunks, mice, raccoons, grouse, turkeys, grackles, crows, jays, wood duck, and even fox and coyote.   Bears in particular rely on a good beech nut crop, especially in areas north of oak range. Research in northern Maine showed that eighty percent of adult female black bears had cubs following years of high beechnut production, compared to twenty-two percent following a poor year. Unfortunately, beech don’t consistently produce reliable nut crops every year, but are somewhat sporadic, producing a good crop every 2 to 3 years. When a beech has a good nut crop, a bear will climb the tree, settle in to a good spot and break off branches, pulling them in to eat the nuts. In the fall and winter, the mass of broken branches, known as a “bear’s nest”, is visible. Bear’s nests can also be seen in cherry, apple, oak, and mountain ash, which are also preferred foods.

Given the importance of beech for wildlife, we certainly want to keep it as a component of our forests, but not necessarily the dominant species in the regeneration. How do we achieve the balance of keeping beech as part of our forest, functioning as critical wildlife habitat, while making sure that other species are well represented? As with many aspects of forest stewardship, a variety of approaches is needed.

When working with mature trees, beech with smooth bark are showing signs of resistance to beech bark disease. These should be retained to preserve the genetic qualities that make them resistant. Bear-clawed beech, scarred from bears climbing them, should also be left in the stand. Bears will use the same trees over and over, one generation teaching the next which trees are the best nut producers. The ultimate tree to leave is one that has smooth bark and bear claw marks. One word of caution – beech trees should be left with other trees shading them on the south and west sides. Their thin bark makes them susceptible to sun scald.

As described earlier, it is quite simple to regenerate beech, especially from stump and root sprouts. The challenge is to reduce the amount of beech regeneration in a forest. This can be done by creating patch clear cuts at least a half-acre in size, preferably larger. Within the patch, all stems need to be severed, especially any beech, if the goal is to reduce beech regeneration. Cutting patches in the summer is helpful too, because the energy is in the upper portion of the tree, rather than in the roots. Cutting in winter is sure to create a dense stand of beech suckers, because all of the energy is stored in the roots during the dormant season. Patch cutting won’t eliminate beech, but it will create conditions for the regeneration of less shade tolerant species such as red oak, yellow birch, and white pine. In a patch cut, the least shade tolerant species such as birch and aspen will regenerate in the sunniest part of the opening, and the more shade tolerant species such as beech, spruce, and fir will be found toward the edges, and the intermediates such as yellow birch and red oak will be found in between. The goal is not to eliminate beech, but to increase the percentage of other species, resulting in a diverse forest.

Beech is a native New Hampshire tree and plays an important role in our forests’ ecology. Healthy beech provide important food for many species and beauty to our landscape. While beech bark disease has wreaked havoc on stands of beech, and its profuse sprouting can create monocultures, with careful stewardship we can help beech continue to play its critical role while creating space for a diverse future forest.