Successfully growing ferns indoors is all about choosing the right species. Some ferns are notoriously tricky to keep alive and looking good inside the home, while others are quite easy with a small amount of care. All ferns typically grown as houseplants come from tropical parts of the world and are adapted to grow in low light with relatively high humidity. In general, ferns with tough, leathery foliage are better suited to normal (dry) indoor conditions, whereas feathery, delicate types do best in greenhouses or terrariums where the humidity can easily be kept higher.

Ferns are some of the oldest living plants on Earth. They reproduce from spores instead of seeds, which differentiates them from most other plants. The majority of ferns grow from underground stems called rhizomes, and the emerging leaves are known as fronds.

Indoor ferns do best when they are kept out of direct light in north or east-facing windows. Sun exposure in south or west-facing windows is often too intense and may scald foliage. A sheer curtain can make these windows more suitable, or simply move ferns further away so they receive less light. Because indoor ferns are tropical, they will grow best if the temperature is at least 65 degrees F during the daytime and around ten degrees cooler at night.

Ferns should be grown in a potting mix that provides good drainage and is high in organic matter. Quality peat-based mixes are appropriate for most species. Choosing the right container is equally important. Practically any pot will work as long as it has a drainage hole at the bottom. Pots without drainage collect excess water and are likely to cause roots to rot. Plant ferns in containers that are slightly larger than the size of the fern’s root mass. Aim to have no more than one inch of space between the roots and the side of the pot.

Ferns have different watering requirements, but, in general, like to have the soil kept consistently moist (not soggy). Regardless of species, the soil should never be allowed to dry out completely or else the fronds will turn brown and die. Whenever possible, use warm, room-temperature water, and soak the container until water drains from the bottom. Empty saucers beneath plants shortly after watering to avoid issues with root rot.

Light fertilization is only recommended when ferns are actively growing in the spring through fall. Abnormally small leaves or yellowed fronds could indicate that fertilizer might be needed. Liquid houseplant fertilizers provide all of the necessary nutrients and should be used at half of the recommended rate to avoid burning the foliage.

Ferns also require a fair amount of humidity to thrive—something that most homes lack in the winter months. Fronds will become brown at their edges or turn yellow and droop if the humidity is too low. A humid environment can be created with a humidifier, by spraying ferns periodically with a misting bottle or by filling a pan with moist pebbles and placing the fern container on top, making sure that the bottom of the pot is not submerged in water. Grouping plants close together will also increase humidity, but it can limit air circulation and encourage disease development. A fan placed nearby can mitigate this issue. Another option is placing the fern’s container within a slightly larger container and filling the space between with sphagnum moss. The moss will help draw excess water from clay pots (not plastic), and as water evaporates from it, the humidity around the fern will be increased.

If you’re new to growing ferns, you might want to start with a species that tolerates slightly lower humidity and is more forgiving with watering. The species listed below are well adapted to growing in an indoor environment and are quite reliable.

Bird’s nest fern has a different look from most other fern species. Its leathery, tongue-like fronds have distinctive wavy edges and distinct ribs down the middle, and they come together in a whorl that resembles a bird’s nest. It should be grown in well-drained potting mix in a bright, north-facing window, preferably in a room that does not dip below 55 degrees F. Potting mix should be kept uniformly moist but never soggy. Bird’s nest fern does require fairly high humidity in the winter, so humid spots like a bathroom or kitchen are ideal. Placing the potted fern atop a wet pebble tray will also work. 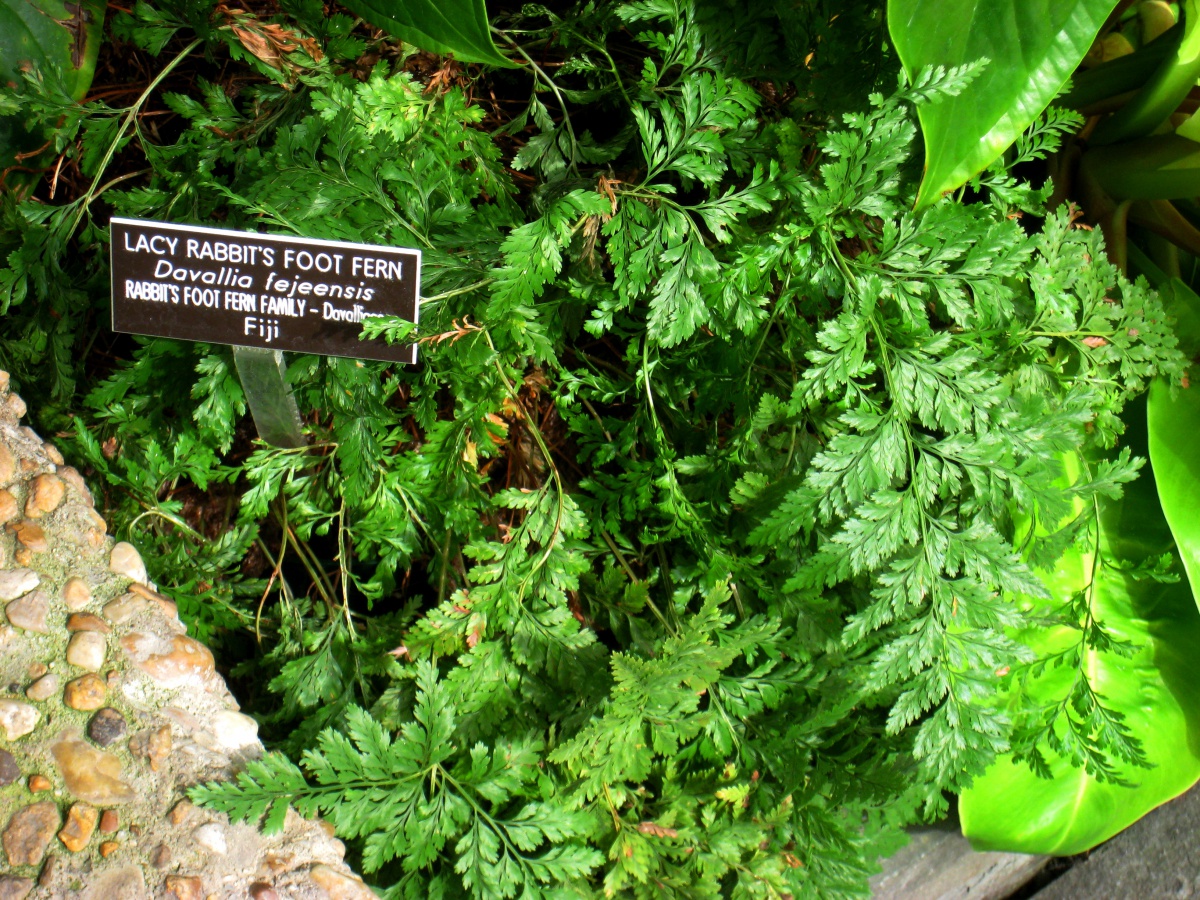 Rabbit’s foot ferns are so called because they have fuzzy rhizomes that aren’t unlike their namesake. This evergreen fern is often grown in hanging baskets or wire frames, though they also make good potted plants. The rhizomes will gradually grow over and down the sides of a pot, lending a unique look to the plant. Rabbit’s foot fern prefers to be somewhat pot-bound and should only be divided if the new fronds are developing smaller than usual. It grows best in humid places, though a pebble tray or double potting will help keep it looking good throughout the winter. 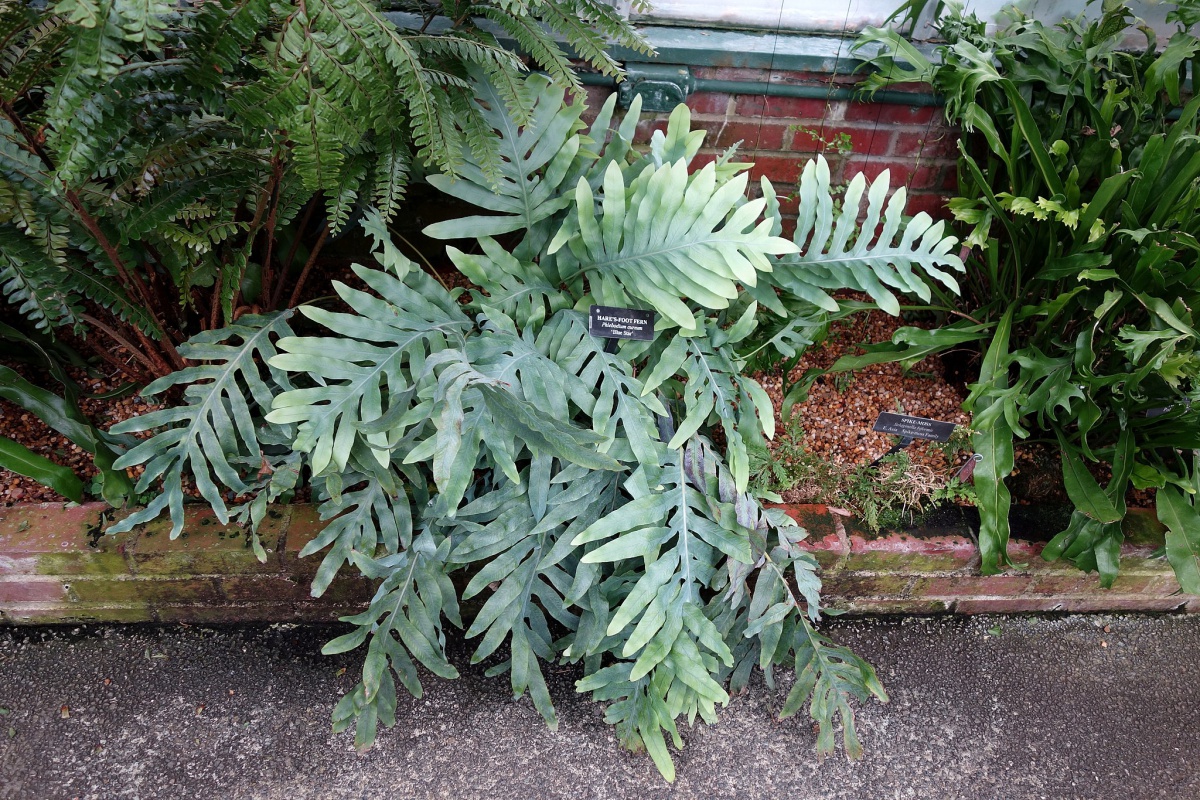 Golden polypody is also called rabbit’s foot fern by some people, because it also has fuzzy scales that coat the rhizomes and grow over the edge of the pot. The name comes from the gold color of the fern’s spores. The fronds can grow 12 to 18 inches long and are deeply divided. A popular cultivated variety called ‘Blue Star’ has unusual bluish fronds that are quite striking. Keep golden polypody in the bathroom or near a humidifier to keep it looking its best.

Cretan brake fern is one to try in the warmest room of your home near a humidifier or on top of a pebble tray. It also does very well in a tabletop terrarium where moisture is easy to maintain. Cretan brake fern is a slow-growing evergreen species with elegant fronds. ‘Albolineata’ is a variety that has cream-colored streaks down the middle of its leaflets and is easy to find at garden centers selling ferns. 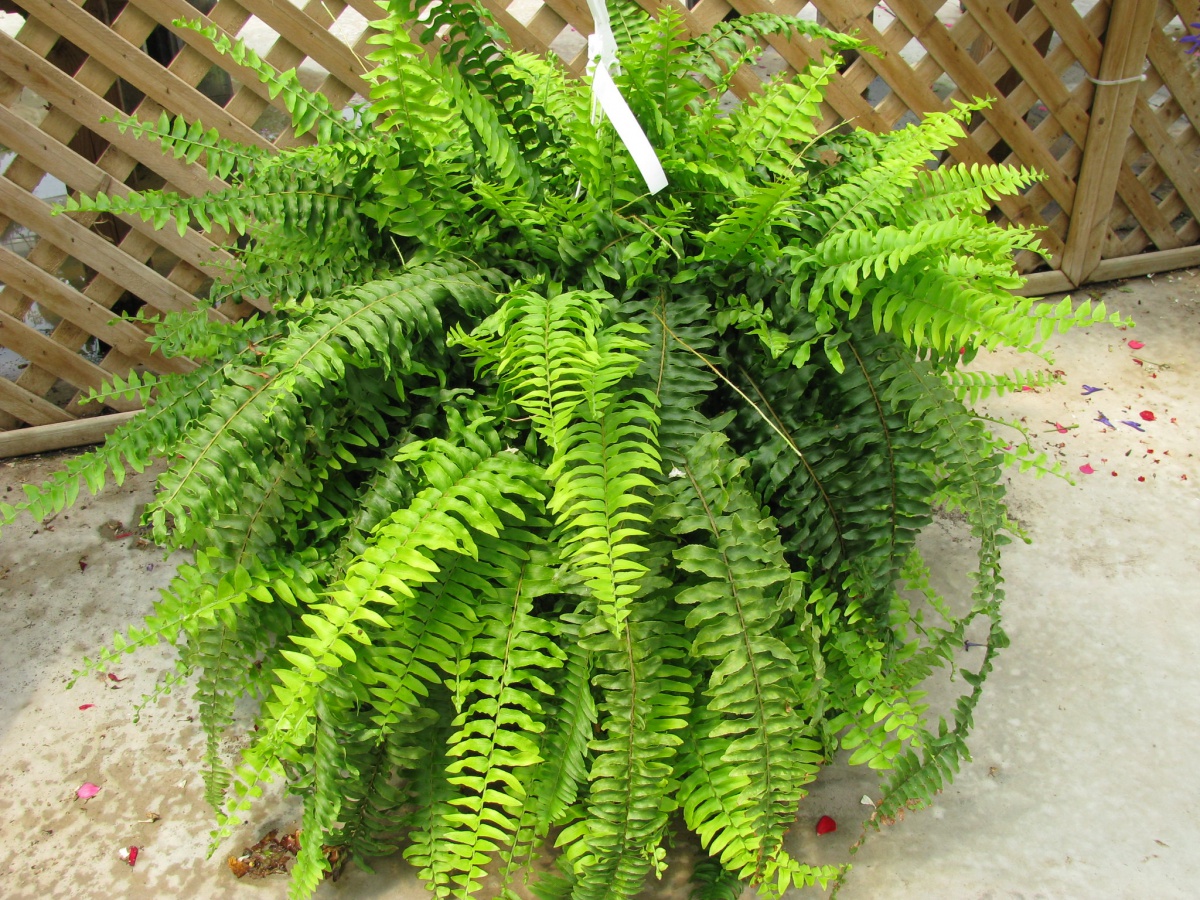 In Victorian times, Boston fern was a staple parlor plant, and it’s still grown widely today. It is considered by many to be one of the easier ferns to grow indoors. The only catch is that the soil must be kept consistently moist and the humidity relatively high, or else many of the fronds will turn brown and die. However, Boston fern’s graceful sword-shaped fronds that arch downward as they age make it worth the trouble. Many cultivars exist with curly, wavy, twisted or overlapping fronds, but the most popular is ‘Bostoniensis.’