An astonishing mountain of white blossoms covering a huge tree beside an old Victorian farmhouse stopped me in my tracks on a beautiful day early in June.  I pulled the car over to take photos. For the past 25 years I never noticed the stunning blossoms of this nearby Catalpa tree! This curious tree with its almost tropical show of speckled white flowers, looks out of place in New England; too showy for our Puritan tastes.

The elegant trumpet shaped flowers are clustered on panicles (stems) in tiers with three smaller stems. The first two tiers produce three flowers at the end of these smaller stems to add up to nine individual flowers per tier or 18 flowers on the two tiers. The lower tiers have but one flower at the end of the smaller stem or six additional flowers. There were 24 individual flowers on the cluster that I counted. The big round buds burst open like popcorn kernels revealing the wadded up flower inside. Miraculously, the delicate flower tissue unfolds without a wrinkle and the frilly scalloped petal edges unfurl perfectly. The flowers look as if they were individually painted with two deep yellow stripes leading to the flower center with purple speckles and markings completing the decoration; all to attract pollinators.  Somehow the seeds produced by the flowers end up inside long skinny 6” -12“ beans that dangle from the tree later in the summer; hanging on through the winter. 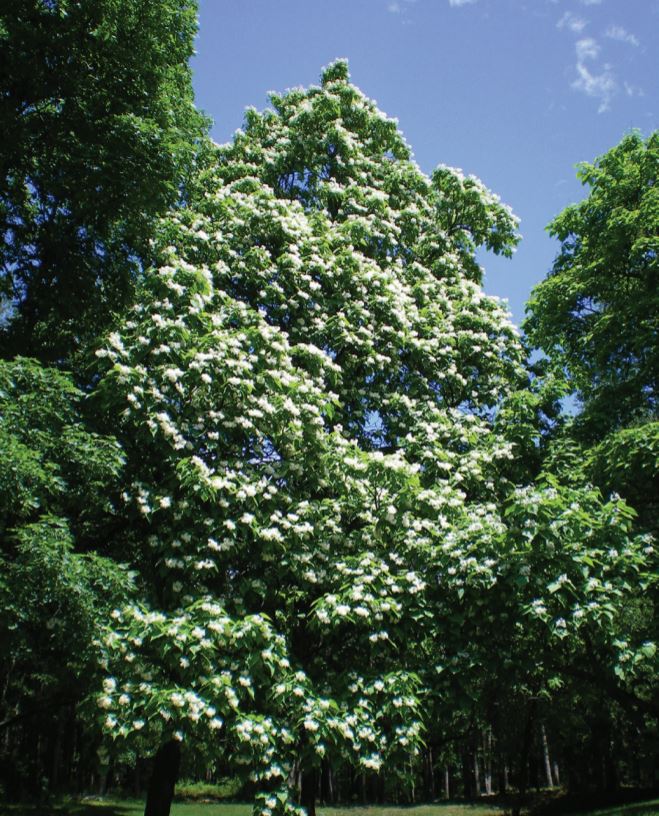 Catalpa trees are designed for survival. Not only are they loaded with flowers, they are dual pollinated, both during the day and also at night! Bees pollinate the flowers in daytime, guided by the yellow and purple markings (nectar guides). At night, increases in nectar and fragrance attract moths to continue the pollination process. (haverford.edu/Arboretum/files/summer2009.pdf).

The huge, broad leaves with netted veins are a medium green and almost lustrous in the sunlight. The underside is lighter green, soft and fuzzy. The edges are smooth. Of course these huge leaves cast dense shade so not much grows under the tree. If not pruned, the branches droop to the ground.

Catalpa trees are an imported species to New England and thought to be native to the mid-west from Arkansas to Indiana. Another species of catalpa, caltalpa bignoioides is native to the south and is not quite as large or as hardy as Northern Catalpa or C. speciosa. The huge old caltalpa trees sprinkled throughout NH are evidence that it is a tough tree that can survive our harsh, cold climate. It was brought north as an ornamental and popular in the Victorian era where it complimented the grand Victorian estates.

The Catalpa grows quickly and needs a large sunny lawn where it can flourish. It is tolerant of many soil types including compacted soils, and grows well along roadsides and near pavement. Its wood is brittle and it can break in wind storms. In spite of its toughness, it is uncommon in NH today, and the few large trees when seen in full flower are showstoppers. A friend explained to me one reason it is uncommon. It is a very messy tree; always shedding twigs and branches, then dropping all those blossoms, followed in the fall by the huge leaves, and finally the litter of the long, cigar-like seed pods (it is also called cigar tree) that drop in the spring. Another negative feature is that it drips sticky residue onto cars parked underneath, an excuse for some to cut them down. Another reason it is uncommon is that its wood makes excellent posts and railroad ties, so they were harvested for these uses, eliminating seed sources. That may not be all bad, as catalpa is included on invasive lists for some states. Huge flower production means huge seed production.

The NH state champ Catalpa tree is in Epsom, Merrimack County, is 62 feet tall with a trunk diameter of 190 inches. To join in the hunt to find NH's biggest trees, please visit www.nhbigtrees.org.