A mid-succession tree of the forest, the Yellow Birch (Betula alleghaniensis) follows the ‘pioneer’ tree species like Gray and Paper Birch, Aspen and Pin Cherry, species that germinate and grow in full sun in clearing and disturbed land. As these short-lived trees die out, a second wave of semi-shade tolerant, longer lived trees take over including Yellow and Black Birch, White Pine, Red and White Oaks, Hickories and Red Maple.

YELLOW BIRCH CHARACTERISTICS
Yellow Birch, the largest of the birches, has beautiful lustrous yellowish bark that peels in horizontal shreds forming curly fringe along the trunk. This is more obvious on younger trees, as the bark on old trees becomes darker and rougher. Crushing the leaves and twigs releases a faint wintergreen fragrance, but not as strong as black birch. Its oval, pointed, double-toothed leaves are similar to paper and black birch. They turn bright yellow in fall.

Yellow birch grows throughout New Hampshire, but is more common in the White Mountains and north as it prefers cool summers. In the southern edge of its range, it grows in cool locations like north facing slopes.

Those of us who ski in New Hampshire and Vermont can easily spot Yellow Birch when we ride chair lifts and look down on the forests below. Yellow Birch is the deciduous tree with ‘cones’ on its bare winter twigs. These ‘cones’ are actually the remains of the upright female catkins that were pollinated by windblown pollen from the drooping male catkins during the previous spring. Yellow Birch can live to 300 years and grow 75 to 100 feet with thicker trunks than other birches.

Yellow Birches produce prodigious quantities of seed on a three-year cycle beginning at about 40 years of age. They need this survival technique because the seeds must find perfect soil and climate conditions to germinate and grow. For example, seeds that germinate in leaf litter die when the litter dries out in summer. Young sprouts may freeze if there is an early frost. Seeds that sprout on long-lasting moss-covered conifer logs and stumps find optimum growing conditions. Even moss covered rocks will do, or better yet, disturbed areas in the forest where the soil is exposed offers seedlings a better chance of surviving. Look for weird roots structures of mature yellow birch trees. They may grow on and around rocks with a network of roots clinging to the rock until finally finding some soil beneath. A yellow birch that sprouts on a stump may end up growing on a scaffold of roots when the stump finally rots away. Rich, well-drained soil is needed for survival. But even if the seedlings make it through these early survival tests, they are vulnerable to browsing deer who favor the tasty sprouts. From USDA: "Deer consume large numbers of yellow birch seedlings in summer and prefer green leaves and woody stems in fall. Moose, white-tailed deer, and snowshoe hare also browse yellow birch. The seeds are eaten by various songbird species, and ruffed grouse feed on seeds, catkins, and buds.  Red squirrel cut and store mature catkins and eat the seeds. Beaver and porcupine chew the bark." 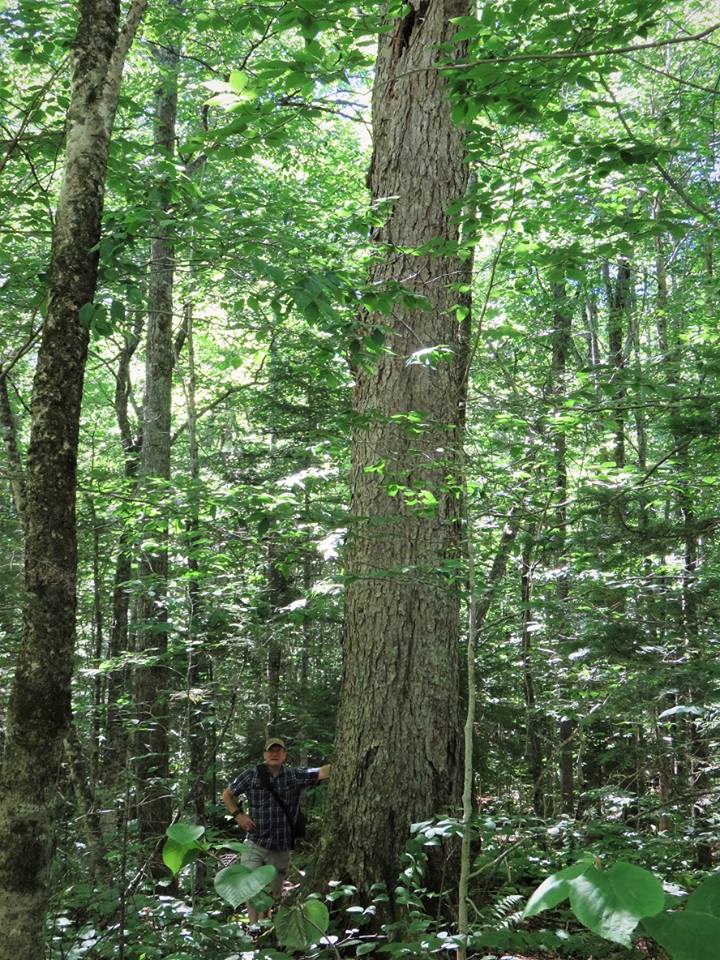 CHAMPION YELLOW BIRCHES
New Hampshire's champion Yellow Birch measures at a circumference of 152 inches and a height of 87 feet.  It is located in Clarksville, NH, Coos County. (View NH's State Champions).  These types of Yellow Birches are an integral part of NH's successional forests, creating a unique canopy while providing shade, food, timber, habitat and oxygen.

You can help the NH Big Tree Program update its records by looking for giant trees. To compare a tree you discover, look up the current champion, and then measure the circumference of your tree to see if it compares.  If you find one that seems bigger than those listed, please get in touch!  Use the below links to help you through the process:

How to Nominate a Big Tree

How to Become a Big Tree Volunteer