There’s a large pine tree in my front yard that died this past year. The decline started last year, when the needles started to look peaked and tired. The needle length was shorter than normal, and there was less foliage supporting the tree. (The foliage is the machinery of photosynthesis, the process that provides food for the tree, and having less foliage makes it harder to thrive and grow.) This lack of needles may have been due to needlecast, a common fungal affliction in white pines that leads to a loss of half the tree’s foliage. Other factors may have contributed to the tree’s decline. It’s growing on the edge of a bank between the road and a narrow strip of yard next to my house, giving it less soil to grow its roots. An ice storm four years ago destroyed a number of branches, but not enough to reduce the photosynthetic capacity of the tree. This pine is a double tree, with a large seam between the two stems. The interior of the tree where the seams meet is an area where moisture can collect, providing great conditions for fungi to thrive. All these factors – loss of foliage, limited space for roots to expand, and the growth of fungi in the stem of the tree – led to its demise. Curiously, one stem of the tree is dead, and the other is still alive. Unfortunately, it’s not an option to remove the dead side and leave the live side – the live half would be too unstable structurally to leave it standing.

As we wait for the company to have time in their schedule to remove the tree, we’ve been able to observe the progression of life that a dead tree provides. One of the first things we noticed was a sound – a grinding, chewing sound. This is the Northeastern Pine Sawyer Beetle, a native insect that attacks dead wood. Numerous small holes appeared in the bark, and we started to see what looked like sawdust – frass, or excrement, from the beetles. After a few weeks of the beetles feeding on the trees, the woodpeckers showed up, their presence announced, like the beetles, with a sound: their familiar staccato hammering. Right now we’ve only seen smaller woodpeckers such as the downy or the hairy woodpecker, but a larger pileated might show up soon. 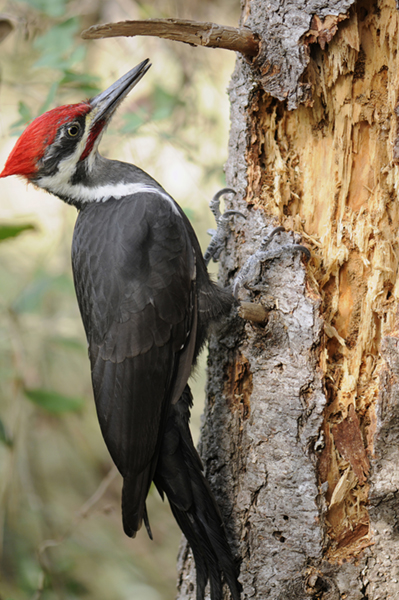 Because this tree is close to our house and is a danger to the power lines and the road, it will be removed. In a forested setting or in a place where it wouldn’t pose a hazard to people and infrastructure, however, it could be left to continue providing habitat. As it begins its long, slow return to the soil, more life will take place on the dead tree. As the woodpeckers continue to explore for insects, they’ll chip away more of the decaying wood, which will create cavities for other animals to colonize. Some will take advantage of the cavities to build nests, and others will use them to hide from predators. Various fungi will continue to colonize the tree, gradually spreading throughout the wood and breaking it down. As the bark loosens up, some species of bats and birds will find refuge in the spaces under the bark. A tall tree like this will provide a singing perch for songbirds, and a hunting perch for hawks and owls.

Eventually, the tree will either fall over or continue to decay as it stands. The taller portions may break off and lay on the ground while the lower portion remains standing. Large pieces of downed wood retain a lot of moisture and provide a good spot for salamanders and other amphibians during a dry summer.

Gradually, over many years and after providing habitat for a wide variety of species, the tree will become soil once again.

When making decisions about managing your woods, consider leaving some standing dead trees to play their important role in the life of the forest.