UNH Extension’s Community and Economic Development team has worked closely with Franklin community leaders since 2015. As the city continues to revitalize its downtown, we’re profiling the community leaders who are helping change the Three Rivers City.

On a Tuesday morning in November, Jo Brown is busy getting the Franklin Studio ready for a group of regulars. Each week at 10 a.m., almost a dozen people from a local church meet at the coffee shop. Brown and the volunteers who work at the shop move tables into place and get the coffee brewing for the influx of people.

“It’s a meeting place for folks and friends,” says Brown, a fourth-generation Franklinite who opened the store almost four years ago. “We have many regulars who come in and they’ll be talking about local business, or things happening in town. It’s become a sort of center for knowing what’s going on in Franklin.”

There’s a lot going on in Franklin these days, and that’s the result of efforts by Brown and other community leaders who are helping shape the community’s revitalization. Brown is energetic, friendly and frank. She’s unabashed in her enthusiasm for her hometown and upfront about the challenges—and opportunities—the town faces.

“It’s an exciting time to be here. It can be done, and I wanted to be a part of that."

“I like doing community work,” says Brown, who also serves as a city councilor—and a member of the local Elks Lodge, past co-chair of Choose Franklin, an organist at her church and a nursing home volunteer. “My husband makes appointments to see me,” she says, laughing.

Brown returned to Franklin in 2011 after a successful career as an Air Force officer. She wanted to be closer to her family—but after returning to Franklin, she also saw the city’s untapped potential. In 2015, she took part in Franklin for a Lifetime, a community event that has helped guide the city’s vision for revitalization efforts. (It’s also become the city’s official motto.)

“I remember what Franklin was like in the 1960s when I grew up here. Every storefront was filled. It was a bustling city with a lot going on. I felt that we could be like that again … that was an exciting time to be in the city, and I wanted to be part of that revitalization.”

Since Franklin’s mills closed in the 1970s, the city has faced a series of economic difficulties. Those challenges were apparent in Franklin’s downtown, where the few storefronts that weren’t empty were predominantly occupied by consignment stores and pawn shops, according to Brown.

Brown envisioned a store that would sell New Hampshire-made products at an affordable price point for city residents. It wouldn’t be just a shop, but a community gathering place, somewhere for locals to meet up, read a book, or just enjoy a cup of coffee in a pleasant downtown spot. 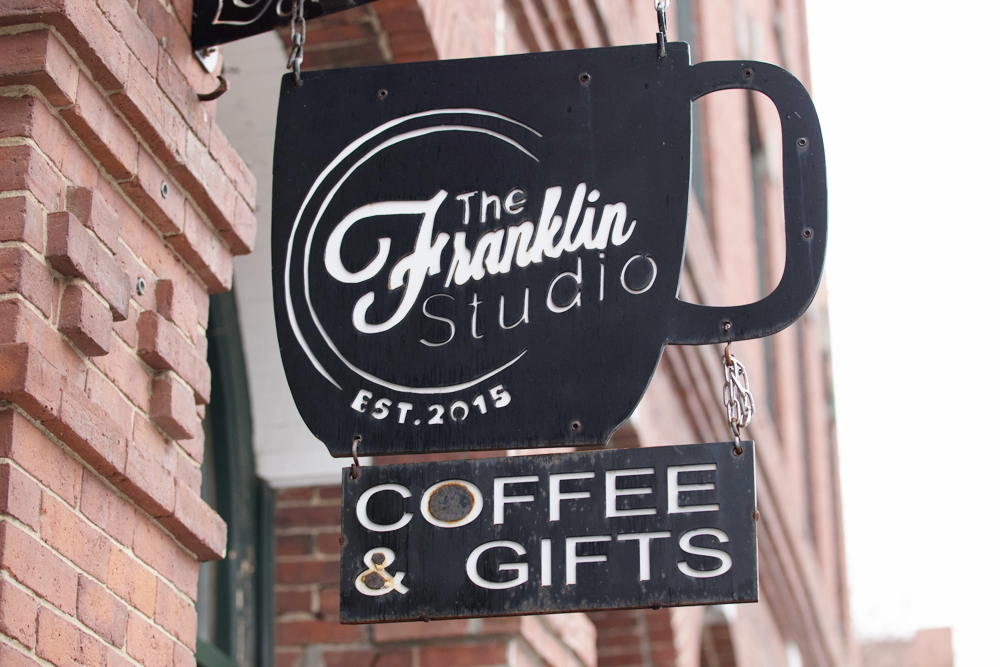 She worked with town officials and local developers to find a storefront. With the help of friends, family and other volunteers, Brown transformed an abandoned tattoo parlor at 366 Central St. into The Franklin Studio.

“It’s a beautiful 1878 building, with original brick walls and a tin ceiling,” she says. “A lot of sweat equity went into it; we were pulling ceramic tiles up off the floor and found the original, beautiful wooden floor!”

The work paid off. In July 2016, the Franklin Studio doubled its space. Locals gather to talk business or have a cup of A&E Coffee (“It has been rated as the best in the state,” Brown brags).  Others stop in to buy items crafted by more than three dozen Granite State artisans. Many of those artisans are Franklin residents. “People know that, and there’s a lot of support for their neighbors,” Brown adds.

For Brown, the city’s future is bright. She points to plans for a whitewater recreation park and the redevelopment of the city’s mill buildings as just two of the many projects that are helping drive Franklin forward into the future. The more things change, the more they remind Brown of the Franklin of her youth—a thriving, closely-knit community.

“It’s an exciting time to be here,” she says. “It can be done, and I wanted to be a part of that. And now, other things are coming along, and a rising tide will help lift all boats.”

Revitalize your community in 2019! Sign up for Main Street Academy and discover how to inspire economic development and encourage citizen engagement in your town.