On December 18, 1856, Henry David Thoreau fulfilled an invitation to speak at the fledgling Amherst, NH Lyceum for the evening. The event was held in the vestry, or the basement of the Church Meetinghouse, a public space for town events and meetings. Attendees paid 10 cents to help the Lyceum pay his $50.00 speaking fee.

Mr. Thoreau later wrote in his journal that he departed from Concord MA, by train:  “A very cold day. Thermometer at 2 degrees at 11:45. I find the first snow enough to whiten the ground beyond Littleton, and it deepens all the way to Amherst. The steam of the engine hugs the earth very close, Is it because it [is] a very clear, cold day?

At Nashua, hire a horse and sleigh, and ride to Amherst, eleven miles, against a strong northwest wind, this bitter cold afternoon. When I get to South Merrimack about 3:15 P.M., they tell me the thermometer is -3°. While the driving hand is getting benumbed, I am trying to warm the other against my body under the buffalo.

After entering Amherst territory, near Souhegan, notice many shagbark trees, which they tell me the owners value as they do a good apple tree, getting a dozen bushels of shelled nuts sometimes from a tree.  I see the nuts on some still.”

I am sure I know the very trees he mentions. They grow along Boston Post Road by the Souhegan River not far from my house. When we moved here in the 1980s, I was astonished at the enormous size of these ‘shagbarks’ and the size of the strips of peeling bark, a fire-proofing feature. Over the years, many of the old giants have been removed, but a few still stand tall. Pictured are the shagbarks that have endured; perhaps they were saplings when Thoreau passed by.  The slow growing hickories can live two to three hundred years. 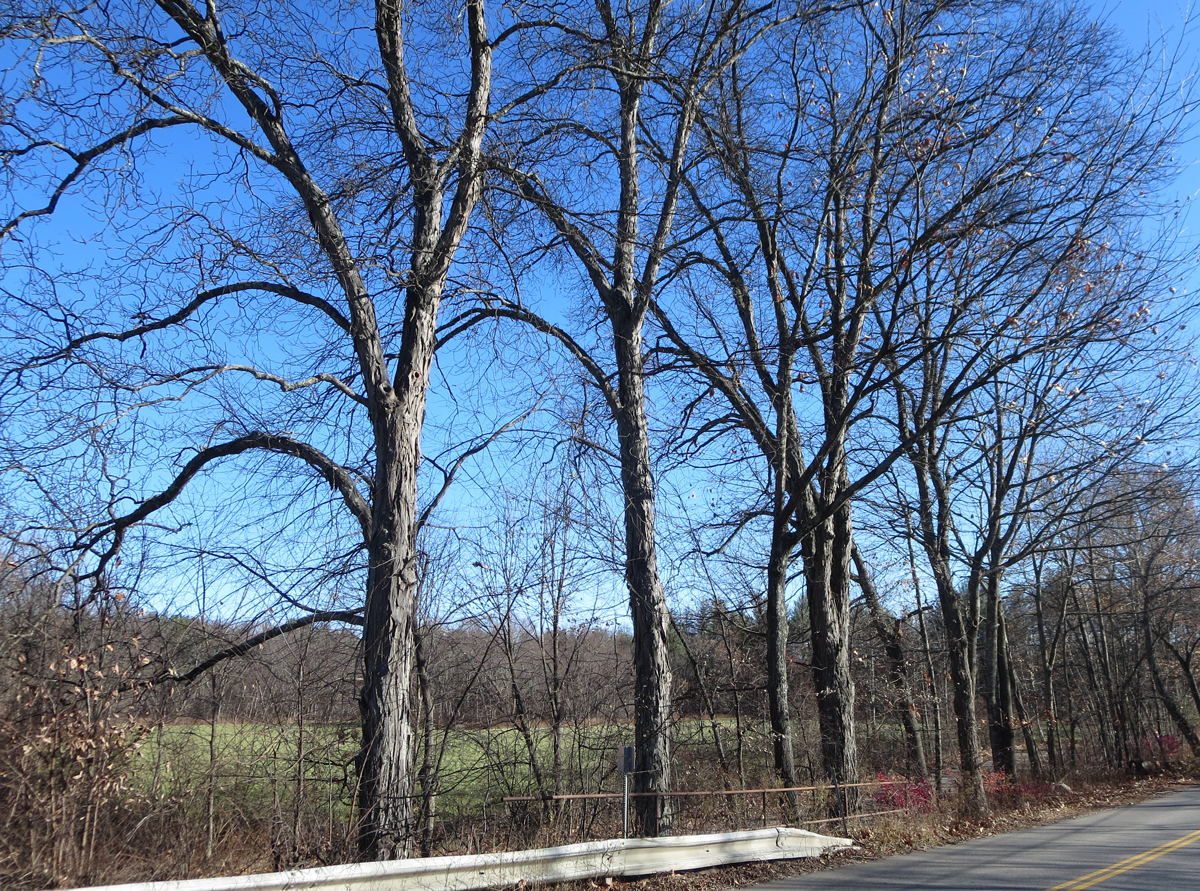 Thoreau lived through the great deforestation period of the New England Industrial Revolution. An interesting book, New England Forests Through Time, Insights from the Harvard Forest Dioramas by D. Foster and J. O’Keefe, describes the Pre–Settlement Forest of 1700, the forest type found by the first settlers:

"(It) was largely covered with a mixture of broad-leaved and coniferous trees. North-central Massachusetts occupies what is called the Transition Forest Zone; here, the northern hardwood-hemlock-white pine forest found in much of Vermont, New Hampshire, and southern Maine overlaps with the central hardwood or oak-hickory forest which extends south to the Mid-Atlantic States."

In addition to the shagbark (Carya ovata), many other varieties of hickories grow here including the pignut hickory (Carya glabra). They have tight bark with intersecting ridges and smaller nuts, and I have a red hickory (Carya ovalis) on my property.

The land was quickly settled by farmers and the forest cut down with the "peak of deforestation and agricultural activity across most of New England [that] occurred during the period from 1830 – 1880". Coincidentally, Thoreau was at his peak as a nature observer and writer. By 1856 he had completed his Walden Pond phase (1845 -1847) where he learned the value of gathering free food, like apples and nuts from roadside trees. His journal comment that a single mature shagbark tree could produce 12 bushels of nutmeats seems preposterous to us today; how could anyone crack that many hard nuts!  Shagbark nuts have very thick husks making the nut itself small and the nutmeat tiny.  But squirrels somehow gnaw the nutmeat out so it must be worth it.

A friend mentioned to me once that he used to gather and crack hickory nuts as a kid:

“I've picked up hickory nuts ever since I was a small kid and loved to crack and eat the nut meat. You're right that there isn't much edible meat within the shell. But, what there is really is great. I found that if you hold the nut upright on an anvil, tilt it slightly to the side and whack it with a hammer you can usually get a whole half of the nut meat to pop out of the broken shell in one piece; the other half more often has to be picked out in pieces.  My guess is that Thoreau embellished the yields or happened to pass through in a good year.“

With this nut-cracking advice in mind, I headed to the vice in the basement. I was afraid I would smash the few nuts I had to taste with a hammer. It took several hard turns, but I cracked a few of the various kinds I had collected this fall in Amherst. Tiny but tasty! 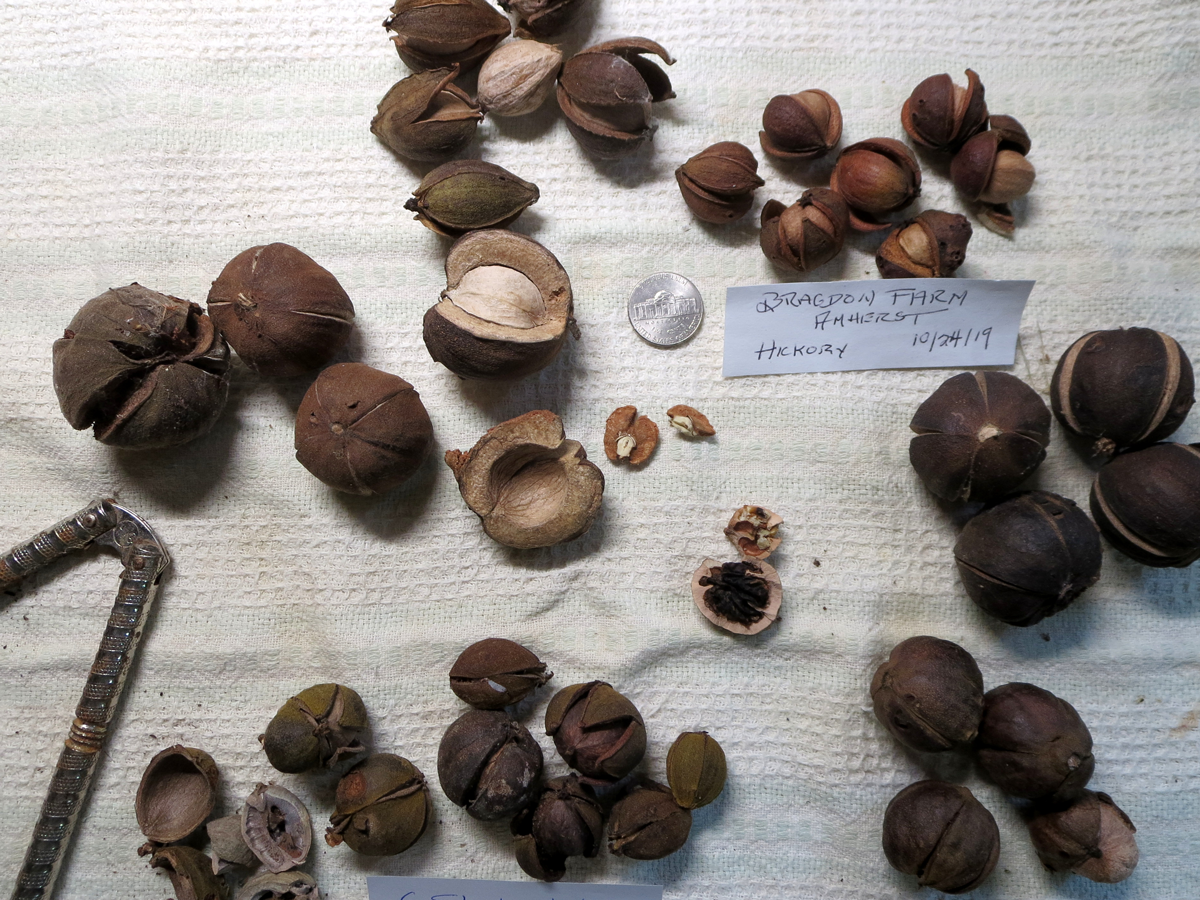 American Forests, the sponsors of the national Big Tree program, reviewed Thoreau’s extensive notes and observations about the trees and forests he grew to love and included this excellent article in the Summer 2016 issue:

Here is an excerpt:

"During Thoreau’s lifetime, New England was all but deforested. While he hated the loss of familiar trees or woods — 'Thank God, they cannot cut down the clouds!' — he was all the more aggrieved for knowing the ecological and psychological value of trees. 'A town is saved,' he wrote, 'not more by the righteous men in it, than by the woods and swamps that surround it.' Today’s recognition of trees as 'carbon sinks' that reduce global warming makes his vision of their value seem clairvoyant.

Thoreau was ahead of his time about trees in other ways. A century before nurse logs became a popular term in forest ecology, he called pines 'nurses' to the oak saplings that take root around them. He did not use the word ecology, but he saw forests as whole landscapes that ignored public and private boundaries and urged that they be preserved as such. He depicted forest trees as 'communities' and villages, anticipating, if only through metaphor, our discovery of trees’ 'social networks.' And, despite the cutting of woods all around him, Thoreau, nevertheless, foresaw that 'one day they will be planted and nature reinstated to some extent.'

Loggers had the upper hand, however, in his own day. Thoreau’s response was to use his gifts as a writer to challenge the petty calculus that reduced forests to so many board feet of lumber. He knew that without trees, nature would wither, and, thus, human life would as well. Trees, he said with customary frugal eloquence, 'are good for other things than boards and shingles.' They should be allowed to 'stand and decay for higher uses.'

Because they endure, trees link us together through the generations, decades and centuries.