White pine and eastern hemlock are most often the dominant trees, but these forests are highly variable and contain a mix of trees common in other forest types. In typical hemlock-hardwood-pine forests, you’ll also find beech and patches of sugar maple and white ash (on rich sites) and red oak (on drier sites). Under the canopy, look for small trees or shrubs such as witch hazel, maple-leaved viburnum, black birch, black cherry, and ironwood, with starflower and Canada mayflower on the forest floor.

Most white pine stands that have grown up from abandoned pastures are examples of this type of forest habitat. On fertile soils, white pine will be replaced over time by hemlock or hardwoods through a process known as forest succession. Although genuine old-growth forests are rare in New Hampshire, look for forests with old-growth features such as patches of large (>18” diameter) hemlock or beech in the canopy, layers of young trees and shrubs growing in the understory, many standing dead trees (“snags”), and abundant decaying wood on the ground. Large-sized cavity trees, pockets of wetlands, patches of acorn-rich oaks, seeps, and “supra canopy” pine trees (extra-tall pines that rise above the rest of the forest) make some areas of hemlock-hardwood-pine forest especially rich for wildlife.

Where are Hemlock-Hardwood-Pine Forests Found in NH?

Why are Hemlock-Hardwood-Pine Forests Important?

Hemlock-hardwood-pine forests are the habitat that surround and support many smaller and unique habitat types in southern New Hampshire. Most wildlife that require vernal pools, marsh habitat, headwater streams, floodplains,shrublands, grasslands, or peat bogs will also use the surrounding forest to meet their needs for food, cover, or breeding. Hemlock-hardwood-pine forests are common, but shouldn’t be taken for granted given the important supporting role they play in the ecosystem.

Acorns and beech nuts in these forests (produced by mature oak and beech trees) are important food for many species including black bear, deer, ruffed grouse, chipmunk, squirrels and blue jay. In turn, raptors such as northern goshawk and Cooper’s hawk feed on small mammals and find nesting and perching sites in white pines in the tree canopy. Large areas of hemlock-hardwood-pine provide habitat for forest birds such as scarlet tanager, hermit thrush, Blackburnian warbler and black-throated green warbler.

Habitat loss from development
The biggest threat to hemlock-hardwood-pine habitats in New Hampshire is the loss of these forests to residential and commercial development. New Hampshire has led New England with the fastest population growth for decades, and it continues to lead the region in loss of forestland. Development permanently eliminates habitat, affecting both forest-dwelling wildlife and animals that use forests as corridors between other habitats such as wetlands. Building and construction of paved roads separates wildlife populations, inhibits migration, increases predation and promotes wildlife-vehicle collisions on roads. 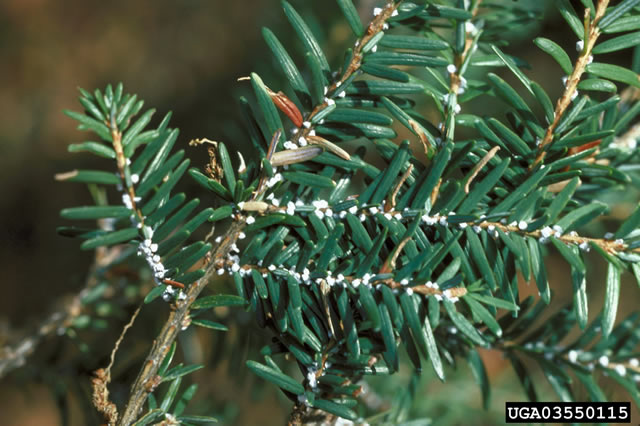 Hemlock woolly adelgid
The hemlock woolly adelgid is an insect introduced from Asia that targets both young and mature hemlock trees, killing them over time. A cottony substance on the underside of needles signals an infestation (see photo at right). Infested trees occur in many towns in southern New Hampshire. Preventative or control measures (e.g., insecticides) are ineffective for more than a few trees at time. If hemlock woolly adelgid results in fewer hemlocks in the forest, critical winter cover will be less available for wildlife such as deer, grouse, fisher, and porcupine, and will also negatively affect migrant breeding birds such as black-throated green warbler.

Uniformity
Many stands of hemlock-hardwood-pine forest in New Hampshire are the same age, roughly 80-100 years old. They grew back after extensive timber harvesting and abandonment of farms throughout the last century. Many wildlife species of conservation concern found in these forests are attracted to patches of old or young trees within the larger forest area. Today’s forests don’t support the same high diversity of wildlife species as older forests that contain a diversity of live and dead trees of different ages and sizes. Complicating matters, the public may prefer to view extensive, unbroken mature forest. As a result, managers are less likely to make large openings (e.g. clearcuts) that will re-grow into the young forests required by many wildlife species.

Click here for the Hemlock-Hardwood-Pine Climate Assessment, a section of the Ecosystems and Wildlife Climate Change Adaptation Plan (2013), an Amendment to the NH Wildlife Action Plan